As wrong as it is to mistreat others, it’s not sacrilege…

Francis claims mistreating Human Beings is “Sacrilege”:
A Reality Check on the Sacred and the Profane When it concerns man rather than God, he gets serious: The apostate pseudo-pope Jorge Bergoglio

You know something is off when Francis complains about sacrilege. He’s just not into religion enough to be concerned about the profanation of the sacred. In fact, if there is one thing he is really good at, besides uttering heresy and blasphemy, it’s committing sacrilege.

His placing of an offering to the “Mother Earth” goddess Pachamama on the high altar of St.… READ MORE Breaking news out of Rome: The Jesuit apostate Jorge Bergoglio (“Pope” Francis) has announced he will consecrate Russia to the Immaculate Heart of Mary, together with the Ukraine, on the Feast of the Annunciation, March 25. … READ MORE 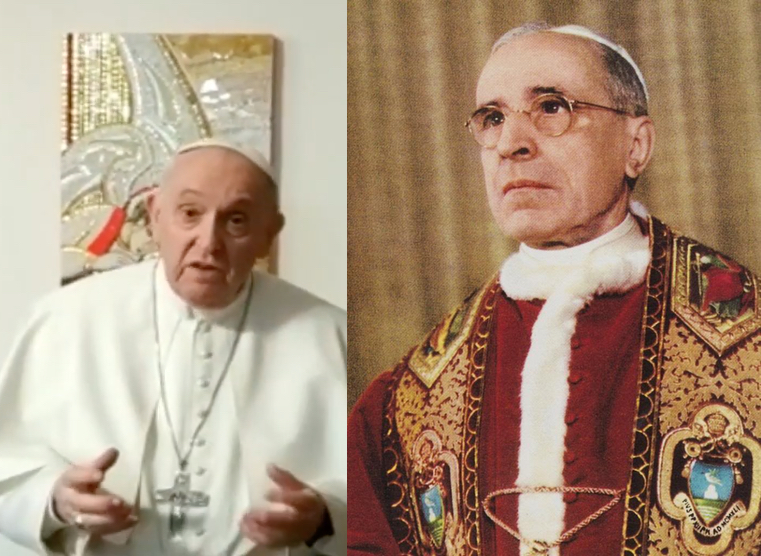 The Catholic group was created in response to Pope Pius XII’s radio message to the Roman faithful, transmitted on Feb.

Pope Pius XII on the Moral Limits of Medical Treatment

On Sep. 14, 1952, Pope Pius XII gave an address to the First International Congress on the Histopathology of the Nervous System.

In it, the Holy Father speaks to scientists and doctors about the moral limits of medical research and treatment, specifically with regard to new methods, procedures, and technologies being tried. Pope Pius also addresses the question of what rights the patient has over his own body and psyche, what rights the doctor has over the patient, and, perhaps most importantly of all, what rights the lawful public authority has over individuals in view of the common good — and doesn’t have.… READ MORE