Just an “imprudent application of the communion of saints”, eh? A perfectly Catholic ceremony — according to Tim Staples

Tim Staples is the Director of Apologetics and Evangelization at the improperly-named Novus Ordo non-profit organization Catholic Answers in California. On his personal blog, he recently posted a defense of the outrageous indigenous ceremony that took place in the Vatican Gardens on Oct. 4, 2019, the eve of the notorious three-week Amazon Synod.

What had been advertised as a celebration of St. Francis of Assisi, whose feast day it was, included a bizarre ritual of dancing, singing, praying, and prostrations to the ground around a set of wooden Pachamama statues amidst other indigenous paraphernalia. Those are the infamous carved figurines depicting a naked pregnant woman that showed up in Roman churches throughout the Amazon Synod, some of which were admirably gathered up and thrown into the Tiber by Austrian Alexander Tschugguel.

Although not actively taking part in the absurd spectacle himself, “Pope” Francis presided over it passively and afterwards blessed one of the statues.

Here is our coverage of the whole circus:

Predictably, this scandalous event led to untold outrage all across the globe and occasioned a statement of protest signed by an international group of high-profile clergy and laity.

The veteran Novus Ordo apologist has recently published an essay entitled, “Pope Francis Commits a Sin of Idolatry With Pachamama?”. While conceding that carrying out this public ritual was not prudent, Staples tries to convince his hapless readers that the ceremony in the Vatican Gardens that day did not include any idolatrous actions by anyone, especially not Francis, who passively presided over the circus.

On June 8, 2021, Staples appeared on the Catholic Answers Live radio program hosted by Cy Kellett. A caller asked him about the Pachamama incident in the Vatican Gardens, and in his response the apologist essentially gave a four-minute summary of his article.

We think that the best way to refute Staples on this is to simply juxtapose his arguments with footage of the event because the moving pictures really speak for themselves. Therefore, we cobbled together video clips of the “highlights” of what transpired on the Vatican lawn, as well as in several churches in and around Vatican City. The audio accompanying the moving images is that of Tim Staples, unabridged, as he responded to the caller on Catholic Answers Live of June 8, 2021, the final segment (1:53:25 – 1:57:13):

The scandal of the idolatry in the Vatican Gardens did not end there, however.

For the end of the synod, the indigenous statues having been recovered from the Tiber, Francis announced that they would be used in the closing liturgy in St. Peter’s Basilica on Oct. 27, 2019. Although that did not happen, possibly because some Novus Ordo bishops said they would not participate should they be used, something even worse took place: A bowl containing a sacrifice to Pachamama was placed on the high altar of St. Peter’s during the closing “Mass”! 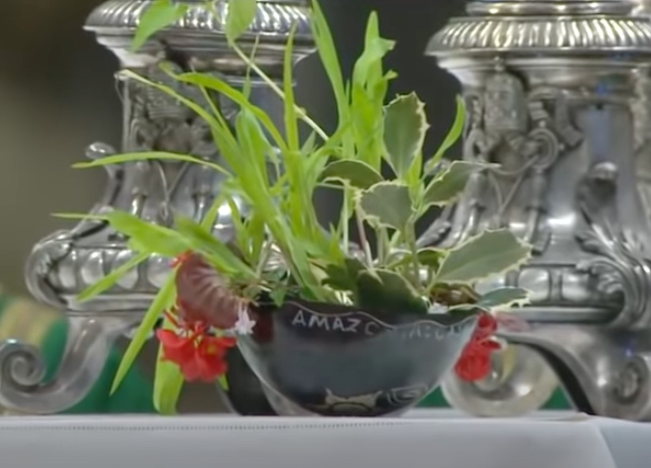 “And there shall be in the temple the abomination of desolation…” (Dan 9:27).
What appears to be just a flower for decoration is actually a sacrifical offering to the Pachamama demon
— on the high altar of St. Peter’s Basilica in the Vatican!

The full video of the closing “Mass” in St. Peter’s is available here. The bowl is prominently carried in the entrance procession, first in line. Beginning at the 56:29 mark, it is handed to Francis for the “preparation of the gifts”, and the false pope then gives it to the master of ceremonies, instructing him to place it on the high altar so everyone can see it. At the end of the liturgy, at 1:32:38, the camera zooms in one more time on the potted plant.

How do we know this was an actual offering to the earth goddess and not just a harmless Amazonian way to “beautify” the altar?

We know this from Pachamama idolaters themselves. Blogger Ann Barnhardt did some digging and posted the results, including photos and video, here:

Vaticanist Robert Moynihan of Inside the Vatican also addressed the strange Pachamama offering in one of his letters and likewise connected it to idolatrous worship:

Thus, the idolatry Tim Staples is denying took place was not confined merely to the Vatican grounds, which would have been bad enough. No, Francis carried it into the very heart of Catholicism, the papal high altar of St. Peter’s Basilica!

Is it any wonder that the world has been an utter madhouse since then (think: Coronavirus)? In a way, the false pope himself has connected Coronavirus and the Amazon Synod, though not, of course, in a way a Catholic would:

In his defense of the abominable Pachamama circus, Staples makes reference to Francis’ post-synodal “apostolic” exhortation Querida Amazonia. Yes, he actually quotes Francis to exonerate Francis from the charge of participating in, or at least overseeing, an idolatrous ceremony. If Francis says it wasn’t idolatry, then it must not have been idolatry, huh?

Just to be clear: We’re talking about a putatively magisterial document in which the supposed Vicar of Christ encourages people to “enter into communion with the forest” (n. 56). Enough said!

After the release of Querida Amazonia, we published a series of six podcasts to dismantle the oh-so “apostolic” document. You can listen to these informative audios here:

What Staples ignores entirely in his argumentation is that Francis himself admitted that the figurines in question were statuettes of Pachamama (and therefore not, as some had argued, of the Bl. Virgin Mary).

Now Pachamama, also known as Gaia or Mother Earth, is an idol, a goddess, originally adored by the Incas; and while we cannot see inside each of the people who participated in this ritual to know whether they internally adored the earth goddess, we can judge their external actions, which were entirely consistent with idolatrous worship: singing and dancing, prayers and prostrations in connection with food and dirt offerings, around Pachamama statues. To an objective observer, it looked like the Golden Calf incident revived (cf. Exodus 32). If that isn’t idolatry, what does idolatrous worship look like?