Spiritual preparation for the Synod… In October of this year the Vatican will hold another one of its infamous “synods”, that is, a meeting with a large number of “bishops” chosen from around the world to spend three weeks listening to boring lectures, reading boring lengthy documents, and then discussing the stuff with their colleagues before collaborating to produce a final document for Francis to use in his post-synodal “Apostolic exhortation”.

This year, the theme of the synod is — wait for it — synodality.… READ MORE 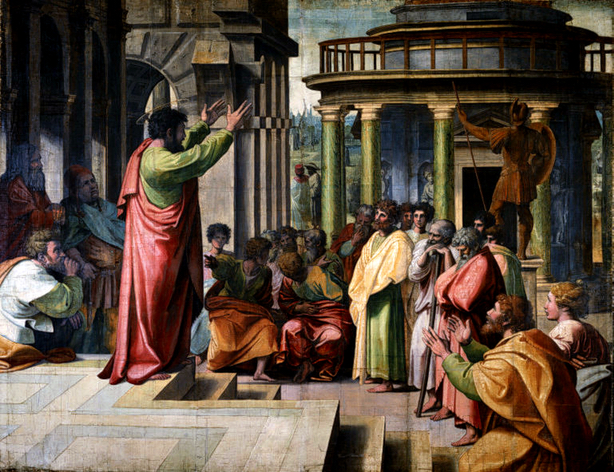 From St. Paul’s Discourse to the Athenians at the Areopagus

[ ] – square brackets: interpolations of the translator.

{ } – curly brackets: interpolations of the translator within square brackets.

( ) — parentheses: In the text (but not the footnotes), Lapide’s parenthetical remarks

“ ” — quotation marks supplied by the translator. The shofar is used for religious purposes only. In our day, sounding the shofar is chiefly associated with apostate Judaism, where the musical horn is used for many different reasons, as explained in their religious texts such as the Kabbalah and the Talmud.… READ MORE It has been said that the definition of insanity is doing the same thing over and over again, yet expecting different results.

If that be true, then the world just got a little more insane on October 25, 2022, when the umpteenth interreligious prayer-for-peace assembly was held under the leadership of the head of the Vatican II religion, currently Jorge Bergoglio, also known as “Pope Francis”.

Under the motto “The Cry for Peace”, the world was subjected to yet another spectacle of representatives of different religions talking about and praying for world peace.… READ MORE A lot happened last week in Kazakhstan. The seventh so-called Congress of Leaders of World and Traditional Religions took place in the capital of Nur-Sultan, also known as Astana, and the head of the Vatican II religion, the Argentinian apostate Jorge Bergoglio (“Pope Francis”) had a prominent role to play in it.

Originally scheduled to be held in the city’s pyramid building, named the Palace of Peace and Reconciliation, it ended up being transferred to the Palace of Independence.… READ MORE On Tuesday, Sep. 13, 2022, the Jesuit apostate Jorge Bergoglio (“Pope Francis”) will visit the nation of Kazakhstan, specifically its capital of Nur-Sultan, which until 2019 was known as Astana. Kazakhstan lies in Central Asia and is a former Soviet republic. It is the ninth largest country in the world.

Vatican releases Logo for Francis’ Trip to Kazakhstan in September

Francis’ apostatic journey to Kazakhstan is scheduled for Sep. 13-15, 2022. This will not simply be one more trip like any other; rather, it will have significance similar to that of his visit to the United Arab Emirates in February of 2019, where he signed a common declaration on human fraternity together with a high-ranking Moslem imam.

The main reason for the visit to the Central Asian nation and its capital Nur-Sultan (known as Astana until 2019) in particular is his announced participation in the Congress of Leaders of World and Traditional Religions that will be taking place then.… READ MORE

I have fond memories of Cardinal Pell, who played a considerable part in helping me find authentic Catholic tradition.

Catholicism after Ratzinger and the Synod on synodality