From the Reserve to the Zoo: Society of St. Pius X slams Francis’ Decree against Traditional Latin Mass

On Saturday, July 17, 2021, one day after the release of “Pope” Francis’ decree Traditionis Custodes, the Lefebvrist Society of St. Pius X published a scathing but humorous response, in which it accuses the supposed Vicar of Christ of “caging” the Traditional Latin Mass and forcibly administering a “vaccination” against Lefebvrism. In this way, the SSPX contends, he seeks to marginalize Tradition-loving Catholics with the ultimate goal of driving them into extinction.

So far, the SSPX statement has been released in French only, available here.… READ MORE Communion by the tongue… On Sep. 15, 2020, people at St. Peter Canisius’ self-communicated by licking hosts off saucers

In the German town of Saarlouis, the Priestly Fraternity of St. Peter (FSSP) has its own parish, the Church of St. Peter Canisius. In terms of externals, it is absolutely gorgeous. The pastor there is “Fr.” Christoph Fuisting.

However, as an organization that prides itself on supposedly retaining Catholic Tradition, what took place there on Sep. 13, 2020 (Fifteenth Sunday after Pentecost), defies belief.

The Teaching Church gets her doctrine from the Deposit of Faith given by Christ through the Apostles, not by consulting contemporary man.

The establishment of an Ecclesial Conference of the Amazon that involves laity and clergy is a sign of a church that listens to God through the voice of his people says @CardenalBarreto
https://www.catholicnews.com/amazon-conference-brings-periphery-front-and-center-cardinal-says/#.YUyLW14eaLI.twitter

“Thus saith the Lord: Stand ye on the ways, and see and ask for the old paths which is the good way, and walk ye in it: and you shall find refreshment for your souls. And they said: we will not walk” (Jer 6:16). 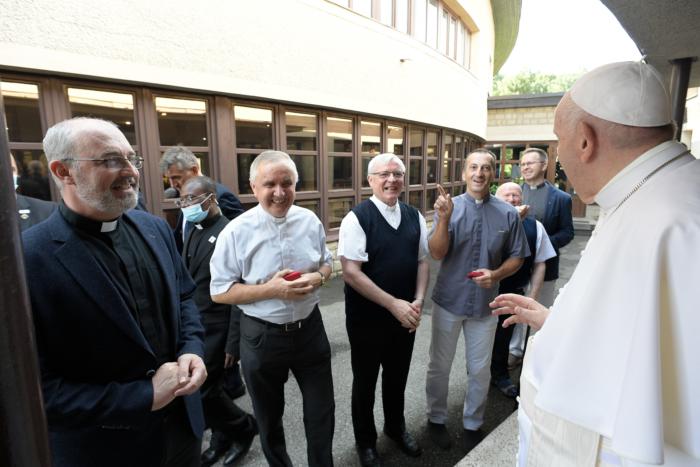 The vacuousness is just overwhelming.

Will the idiocy and cretinous mediocrity reigning in the Vatican in this pontificate never end?

Only now did we learn that the bishop of Nota, Italy, Antonio Staglianò, wrote an ode to Lennon's "Imagine" in none other than the official Vatican daily, L'Osservatore Romano.

👆 *Today is the 71st Anniversary of "MENTI NOSTRAE"-Pope Pius XII's Apostolic Exhortation to the Clergy of the world on Development of Holiness in Priestly Life...*@MHTSeminary @NovusOrdoWatch @truerestoration @ZoeKing_1958