“Bishop” Athanasius Schneider (b. 1961) is currently in the United States, traveling from one speaking engagement to another. As one of “Pope” Francis’ most outspoken critics, the Kazakh auxiliary of Astana is in high demand with the recognize-and-resist traditionalists, who need a kind of ‘substitute pope’ to reassure them that they are right to resist Francis while still recognizing him as a valid successor of St. Peter. And Schneider delivers.

Never mind that, supposing him to be Pope for a moment, it is Francis who has universal jurisdiction over all Catholics, whereas Schneider has jurisdiction over none, being a mere auxiliary and not in charge of a diocese.… READ MORE 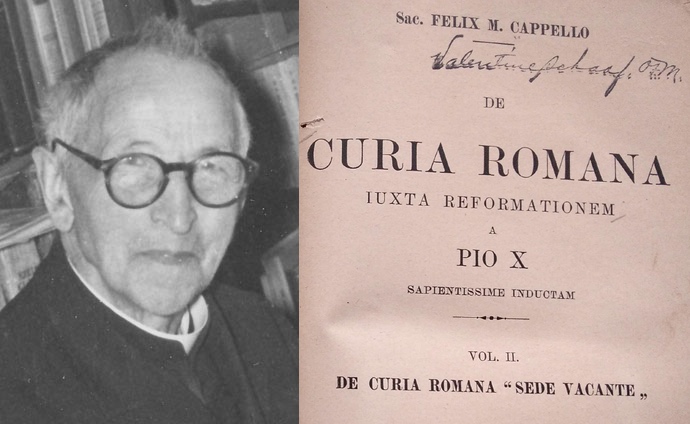 The Jesuit Fr. Felix Cappello (1879-1962) was an outstanding theologian of the Catholic Church. He held doctorates in Sacred Theology, philosophy, and canon law. He taught at the Pontifical Gregorian University from 1920 to 1959 and served as a Vatican advisor.

In 1911/12, Fr. Cappello’s 2-volume work De Curia Romana (“On the Roman Curia”) was published. Volume 2 deals specifically with the Roman Curia during a time when there is no Pope, the state of sede vacante. It contains a treatment of the question of the “heretical Pope” (Papa haereticus) and whether the Church has the power to depose him.… READ MORE

A rebuttal based on real Catholic teaching…

No Saint Athanasius: “Bishop” Schneider continues to spread Errors about the Papacy The German branch of the Vatican II Sect has recently opened its so-called “Synodal Way” or “Synodal Path” (Synodaler Weg), which is essentially an elaborate and structured series of chat sessions in which the laity get to tell their pastors what changes they want to see in the “Catholic Church” going forward. And since we’re not talking about just any country but about the Land of Luther, long one of the hotbeds of Modernism, this will produce a veritable catalog of ultra-liberal desiderata: married clergy, women priests, homo “marriage” ceremonies in church, and the like.… READ MORE

Justifying a false pope at the expense of a true one…

A Response to “Bishop” Athanasius Schneider’s Claims against Pope Liberius

With the recent kerfuffle about the five dubia submitted by “Cardinals” Caffarra, Burke, Meisner, and Brandmuller, it was just a matter of time before we were going to hear from Mr. Athanasius Schneider, the auxiliary “bishop” of the Novus Ordo Archdiocese of Saint Mary in Astana, Kazakhstan. Schneider is about as far right in the Novus Ordo spectrum one can be while still being considered in full communion with the Modernist-in-Chief in Vatican City.

In a new interview published at the Rorate Caeli blog, Schneider has come to the defense of the four “cardinals” mentioned above, whose dubia (“doubts”, or formal requests for clarification) have forced Francis into a corner from which he will not be able to escape because they do not allow for anything but a clear and straightforward answer, something Francis has been deliberately refusing to give in public (but not in private!… READ MORE

The Blessed Virgin Mary is the only creature in the world who can truly make the Father's words her own: "This is my Beloved Son. Listen to Him." (Cf. Luke 1:43; John 2:5; Gen 41:55-56) #catholic #catholictwitter #christian

Supporters of Novus Ordo Watch: Your annual contribution statements for tax purposes have been e-mailed to you (if not received, please check your spam folder). Those who provided no e-mail address will receive it by postal mail in the next few days.