A case of false advertising…

Catholic Family News and the 100% Challenge After the passing of John Vennari earlier this year, the new editor of the semi-traditionalist, recognize-and-resist flagship publication Catholic Family News (CFN) is Matt Gaspers. With Gaspers taking over the reins, CFN completely redesigned its web site, and the new version was launched just a few weeks ago.

Perusing the revamped CFN web site, we noticed that its “Online Store” page says the following: “Don’t miss a single issue of Catholic Family News, the monthly journal 100% faithful to the Catholic Faith of all time, and to Pope St.

One of the most prominent and influential writers of the traditionalist movement in the Vatican II Church was the English writer Michael Treharne Davies (1936-2004), shown above with then-“Cardinal” Joseph Ratzinger. No individual has written more prolifically than Davies on traditionalist issues, and probably no single layman, with the possible exception of Dietrich von Hildebrand, has enjoyed wider prominence, credibility, and trustworthiness than him. But is this respect Mr. Davies has enjoyed really well-founded? 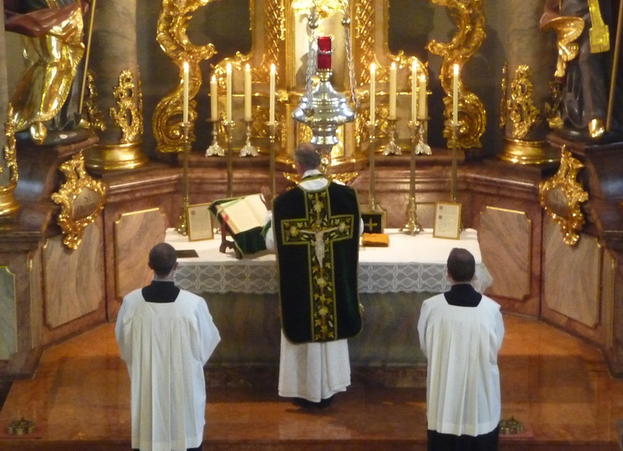 The Society of St. Pius X’s District of Great Britain operates a school dedicated to St. Michael the Archangel in the small village of Burghclere, England. According to its official web page, St. Michael’s School is an “independent school founded in 1991 to give a traditional Catholic education to children from 5-18 years.” Fr. Francois Chazal is a priest who holds the recognize-and-resist position of Abp. Marcel Lefebvre: Recognize as valid the “Popes” since Vatican II while resisting anything they teach or legislate that appears to conflict with Church teaching or practice before Vatican II. At this point, Fr. Chazal is a part of the so-called “Marian Corps” or “Strict Observance” faction of the Lefebvrist Society of St. Pius X, which broke away from the “official” SSPX in response to Bp. Fellay’s conciliatory course with regard to the Vatican Modernists.

Ladies and gentlemen, the following experiment is going to be extremely dangerous. Please put on your goggles, protective gloves, and a breathing mask to minimize the hazardous material you will be exposed to. We’re going to do the unthinkable: For a few minutes, we’re going to take Francis’ claim to being the Pope of the Catholic Church seriously! We will simply square the circle and pretend for a short while that the apostate Jesuit Jorge Bergoglio is actually the Vicar of Jesus Christ on earth! The purpose of this highly toxic experiment will be to demonstrate the consequences that would follow from this absurd supposition.

Although he has just been relieved from his post as Prefect of the Congregation for the Destruction of the Faith and the Ecclesia Dei Commission, “Cardinal” Gerhard Ludwig Muller was certainly still in charge back in May of this year, when, as it has just been made known, the then-head of the CDF called a plenary session of his congregation to discuss once more the doctrinal declaration the Society of St. Pius X will be required to sign as a condition for full reconciliation with the Novus Ordo Sect.

On June 8, 2017 there appeared an article entitled, “Unity of Faith with Pope Francis & Canonical Recognition of the SSPX” on the web site of the SSPX’s Asian District. The essay was written by Fr. Paul Robinson, a professor of dogmatic theology at the Lefebvrian Holy Cross Seminary in Lake Bathurst, Australia. As the article points out in an introductory comment, it is “published with permission of the SSPX’s General House in Menzingen”, which means it comes with the highest possible Lefebvrian approval, that of Superior General Bp.

A transcript of the interview has been posted by the SSPX U.S. District and is accessible here. 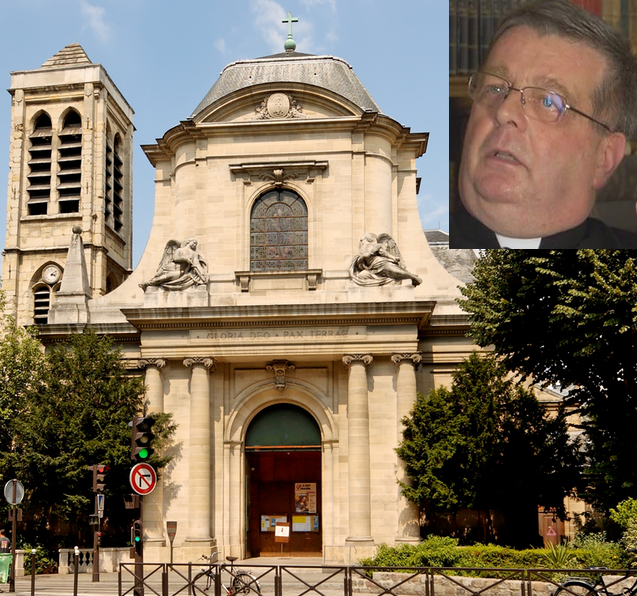 On May 7, someone at Cor Marie published a post entitled “Sedevacantism and Calvary”, in which the poster quotes approvingly from a brief anti-sedevacantist article called “A Monster with No Head”, which itself appears to be part of a larger work called Old Battle, New Fronts.

We have said a number of times on this blog that in the world of the semi-traditionalists, the blind are leading the blind. This is not just rhetoric, it simply describes reality. Whether it be people arguing that there is no point to having the correct diagnosis of a problem if one does not have the cure — as though a correct diagnosis were not at least the indispensable starting point for any remedial action; whether it be Christopher Ferrara promoting the idea of an “Anti-Catholic Pope”; whether it be one blogger’s argument that the Pope need not be submitted to “if he’s an idiot”; or whether it be “Bp.”

Antonio Socci: ‘We Are Watching the Leaders of the Church Work Against Her’ - https://www.churchmilitant.com/news/article/watching-the-leaders-of-the-church-work-against-her Socci no doubt means well but he is another blind guide leading the blind. #infiltration #CatholicTwitter

We remember how ‘Cardinal’ Muller was dismissed...

@ProtecttheFaith ++Sarah turns 75 this year; he has been at CDW since 2014, so more than five years. He could be angrily sacked or they could just thank him and let him go into retirement. One thing is sure, he will not be reappointed, although Francis's curial favorites serve well beyond 75.

And when the “priest” in question is someone like James Martin…

In many parishes, there is only one man at the altar during Mass: the priest. The altar servers are all girls, and the Eucharistic ministers are female as well. https://www.crisismagazine.com/2020/no-church-for-young-men

It looks like this is the year the “Benedict XVI is the real Pope” deception will find mainstream acceptance: It lets people rid themselves of Bergoglio without having to embrace the dreaded and hated Sedevacantism. The facts about Ratzinger will be ignored — too inconvenient! 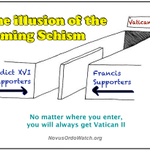 1/ According to Prof Roberto De Mattei Pope Benedict's renunciation happened under grave error. That would mean the renunciation to be invalid.
“This situation is the consequence of a grave theological error by Cardinal Ratzinger. ..."

It’s typical for Ratzinger, though. He has to innovate everything. He is a Modernist, after all.

"... By keeping the title Pope emeritus, as happens with bishops, he appears to believe that the rise to the Papacy imprints an indelible mark similar to that of the priesthood.“
https://rorate-caeli.blogspot.com/2020/01/de-mattei-real-mess-is-cohabitation-of.html?m=1

Among those present at the event was retired apostolic nuncio to the United States and whistleblower Archbishop Carlo Maria Viganò, making his first public appearance since he went into hiding after issuing his testimony in August 2018. 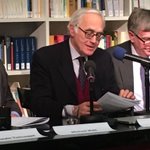