It is certainly sad and painful to treat with severity those whom We cherish as children, but to act in this way, whatever it may cost, is sometimes a duty for those who have to labor for the salvation of others and keep them in the way of holiness. A greater severity becomes necessary when there is reason to believe that the evil only increases with the passage of time and is working harm to souls. These are the motives, Venerable Brother, which have brought you to use your powers to censure a state which is surely reprehensible, both because it is harming the sacred authority of bishops, and because it attacks not merely one, but a great number of bishops, describing their acts and their government in acrimonious terms, summoning them, so to say, before a court of law, as if they had failed in their most important and sacred duty.

No, it cannot be permitted that laymen who profess to be Catholic should go so far as openly to arrogate to themselves in the columns of a newspaper, the right to denounce, and to find fault, with the greatest license and according to their own good pleasure, with every sort of person, not excepting bishops, and think that with the single exception of matters of faith they are allowed to entertain any opinion which may please them and exercise the right to judge everyone after their own fashion.

In the present case, Venerable Brother, there is nothing which could cause you to doubt Our assent and Our approbation. It is Our first duty to take care, uniting Our efforts to yours, that the divine authority of the bishops remain sacred and inviolable. It belongs to Us also to command and to effect that everywhere this authority may remain strong and respected, and that in all things it may receive from Catholics the submission and reverence which are its just due. In fact, the divine edifice which is the Church is supported, as on a foundation visible to all men, first by Peter, then by the Apostles and their successors the Bishops. To hear them or to despise them is to hear or to despise Our Lord Jesus Christ Himself [cf. Luke 10:16]. The Bishops form the most sacred part of the Church, that which instructs and governs men by divine right; and so he who resists them and stubbornly refuses to obey their word places himself outside the Church [cf. Matt. 18:18]. But obedience must not limit itself to matters which touch the faith: its sphere is much more vast: it extends to all matters which the episcopal power embraces. For the Christian people, the bishops are not only the teachers of the faith, they are placed at their head to rule and govern them; they are responsible for the salvation of the souls whom God has entrusted to them, and of which they will one day have to render an account. It is for this reason that the Apostle St. Paul addresses this exhortation to Christians: “Obey your prelates, and be subject to them. For they watch as having to render an account of your souls” [Heb. 13:17].

In fact, it is always true and manifest to all that there are in the Church two grades, very distinct by their nature: the shepherds and the flock, that is to say, the rulers and the people. It is the function of the first order to teach, to govern, to guide men through life, to impose rules; the second has the duty to be submissive to the first, to obey, to carry out orders, to render honor. And if subordinates usurp the place of superiors, this is, on their part, not only to commit an act of harmful boldness, but even to reverse, as far as in them lies, the order so wisely established by the Providence of the Divine Founder of the Church. If by chance there should be in the ranks of the episcopate a bishop not sufficiently mindful of his dignity and apparently unfaithful to one of his sacred obligations, in spite of this he would lose nothing of his power, and, so long as he remained in communion with the Roman Pontiff, it would certainly not be permitted to anyone to relax in any detail the respect and obedience which are due his authority. On the other hand, to scrutinize the actions of a bishop, to criticize them, does not belong to individual Catholics, but concerns only those who, in the sacred hierarchy, have a superior power; above all, it concerns the Supreme Pontiff, for it is to him that Christ confided the care of feeding not only all the lambs, but even the sheep [cf. John 21:17]. At the same time, when the faithful have grave cause for complaint, they are allowed to put the whole matter before the Roman Pontiff, provided always that, safeguarding prudence and the moderation counseled by concern for the common good, they do not give vent to outcries and recriminations which contribute rather to the rise of divisions and ill-feeling, or certainly increase them.

Once again today We recall these documents; once again We inculcate this teaching, with the very great hope that Our admonitions and Our authority will calm the present agitation of minds in your diocese, that all will be strengthened and find rest in faith, in obedience, in the just and legitimate respect towards those invested with a sacred power in the Church.

Not only must those be held to fail in their duty who openly and brazenly repudiate the authority of their leaders, but those, too, who give evidence of a hostile and contrary disposition by their clever tergiversations and their oblique and devious dealings. The true and sincere virtue of obedience is not satisfied with words; it consists above all in submission of mind and heart.

But since We are here dealing with the lapse of a newspaper, it is absolutely necessary for Us once more to enjoin upon the editors of Catholic journals to respect as sacred laws the teaching and the ordinances mentioned above and never to deviate from them. Moreover, let them be well persuaded and let this be engraved in their minds, that if they dare to violate these prescriptions and abandon themselves to their personal appreciations, whether in prejudging questions which the Holy See has not yet pronounced on, or in wounding the authority of the Bishops by arrogating to themselves an authority which can never be theirs, let them be convinced that it is all in vain for them to pretend to keep the honor of the name of Catholic and to serve the interests of the very holy and very noble cause which they  have undertaken to defend and to render glorious.

Now, We, exceedingly desirous that any who have strayed return to soundness of mind and that deference to the sacred Bishops inhere deeply in the hearts of all men, in the Lord We bestow an Apostolic Blessing upon you, Venerable Brother, and to all your clergy and people, as a token of Our fatherly good will and charity.

Given in Rome, at St. Peter’s, on the 17th day of December of the year 1888, the eleventh of Our Pontificate.

Note: This document of Pope Leo XIII is also available as a PDF file: click here to download

Today is the fourth anniversary of Francis and the imam signing the apostate Document on Human Fraternity. No, it doesn't admit of an orthodox interpretation, and yes, Francis made it into an official 'papal' act: https://novusordowatch.org/2022/02/human-fraternity-declaration-becomes-papal-act/ Game over, Bergoglio! #PopeFrancis

Whoa, plastic bottles? Are those LaudatoSi-friendly? 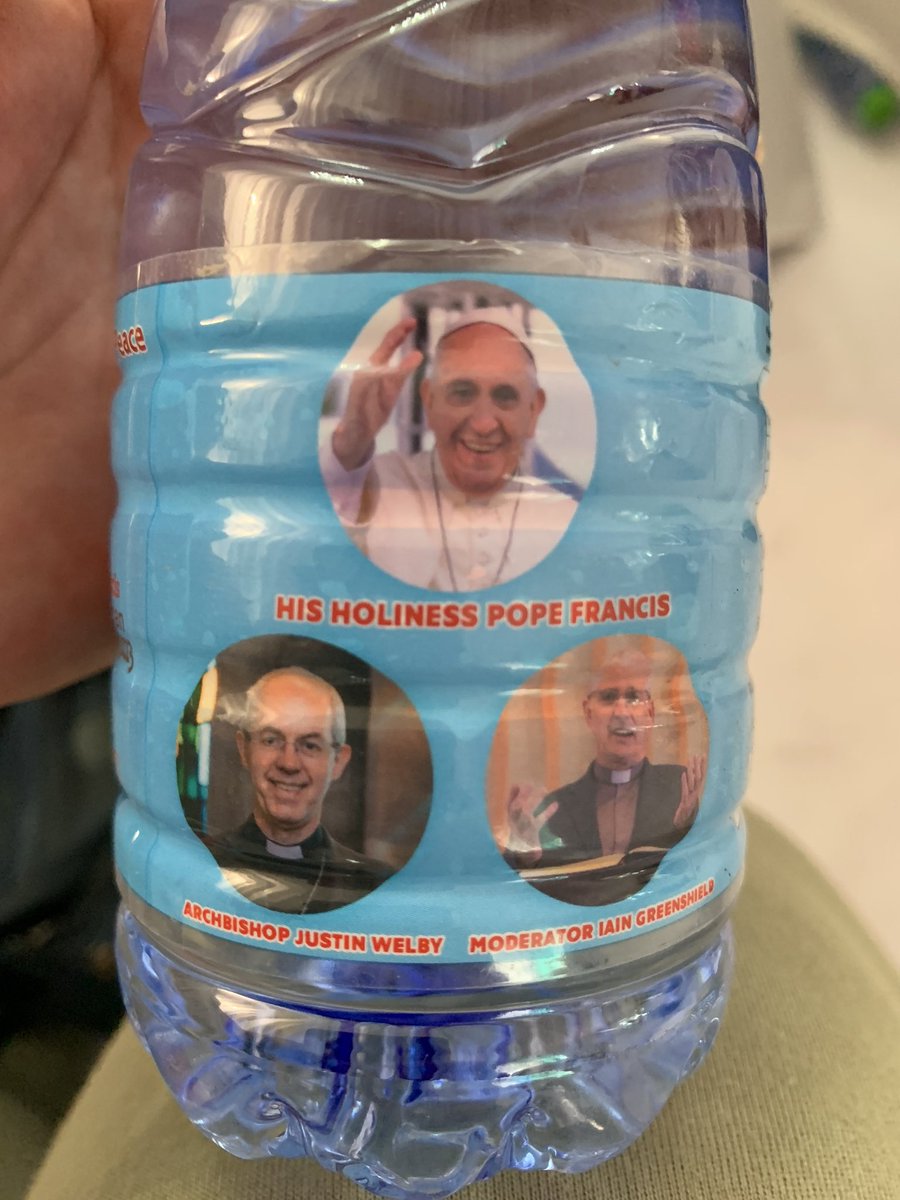 When you REALLY need a refreshing ecumenical gesture. #PopeFrancis @JustinWelby and @churchmoderator in Juba, South Sudan

He loves staying vague. Allows for the greatest amount of chaos. 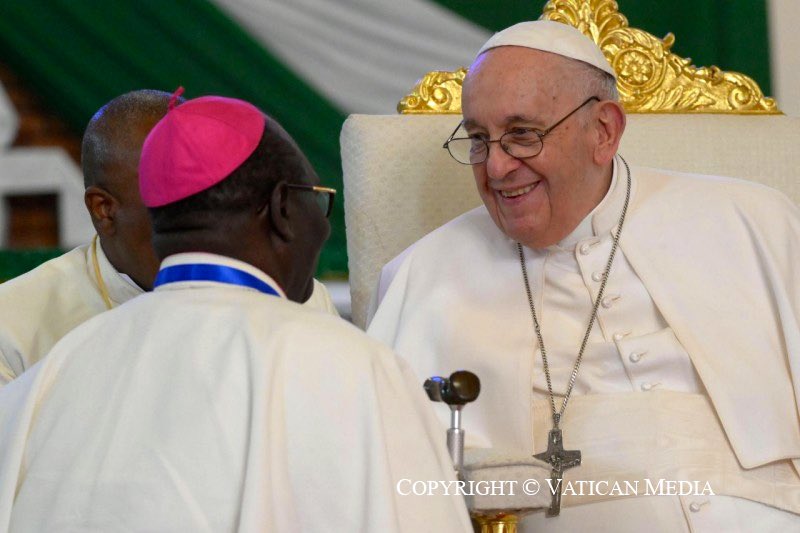 Pope Francis to #SouthSudan Bishops: “Our first duty is not to be a Church that is perfectly organized, but a Church that, in the name of Christ, stands in the midst of people’s troubled lives, a Church that is willing to dirty its hands for people.” https://www.vatican.va/content/francesco/en/speeches/2023/february/documents/20230204-clero-sudsudan.html