In a nutshell: The so-called Pontifical Biblical Commission, of which the current head is the Jesuit “Cardinal” Luis Ladaria Ferrer in his capacity as head of the Congregation for the Destruction of the Faith, just recently published a study commissioned by Francis entitled Che cosa è l’uomo?… READ MORE Breaking news from the Vatican: After nearly 2,000 years, a layman pretending to be Pope has uncovered what the Gospel “really teaches” regarding human dignity and the death penalty.

Under his stage name “Pope Francis”, the Argentinian apostate Jorge Bergoglio has decreed that a change be made to the 1997 typical edition of the Catechism of the Catholic Church, a work originally promulgated by the non-existent “apostolic authority” of the Polish apostate bishop Karol Wojtyla (stage name: “Pope John Paul II”).… READ MORE

After Germany’s Modernist pseudo-bishops published a document in February of this year which permits the Protestant spouses of Novus Ordos to receive “Holy Communion” — acc. to Walter Kasper, without having to believe in even so much as Transubstantiation, of course — some dissenting “bishops” complained to the Vatican, and so Francis ordered the disputing parties to come to Rome for a meeting.… READ MORE 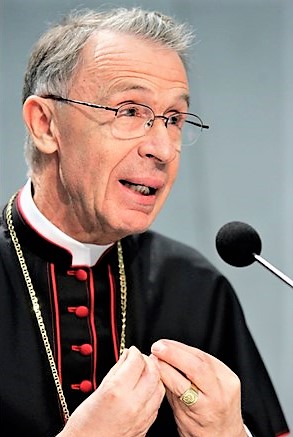 The formal announcement came in today’s bollettino of the Vatican Press Office (Italian original here). Strictly speaking, Muller was not “fired” by Francis but simply did not have his expiring 5-year appointment (which began on July 2, 2012) renewed.… READ MORE