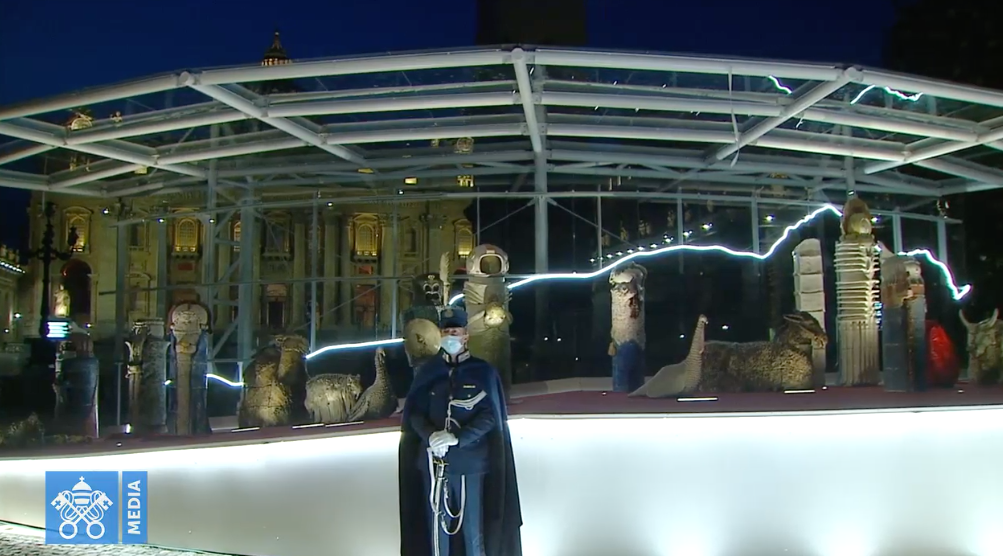 In case you thought 2020 couldn’t get any worse, it just did: The Vatican has unveiled its Nativity Scene in St. Peter’s Square.

Although this year we’re not confronted with a homo-erotic Frankie Horror Picture Show or an unconventional Nativity display made of sand, what Bergoglio’s sect came up with this time around is a fitting end to an annus horribilis, a truly horrific year.

Pictures tell the story quite well. Words are not really necessary. The following are all YouTube screenshots from Vatican Media‘s live coverage of the unveiling ceremony: 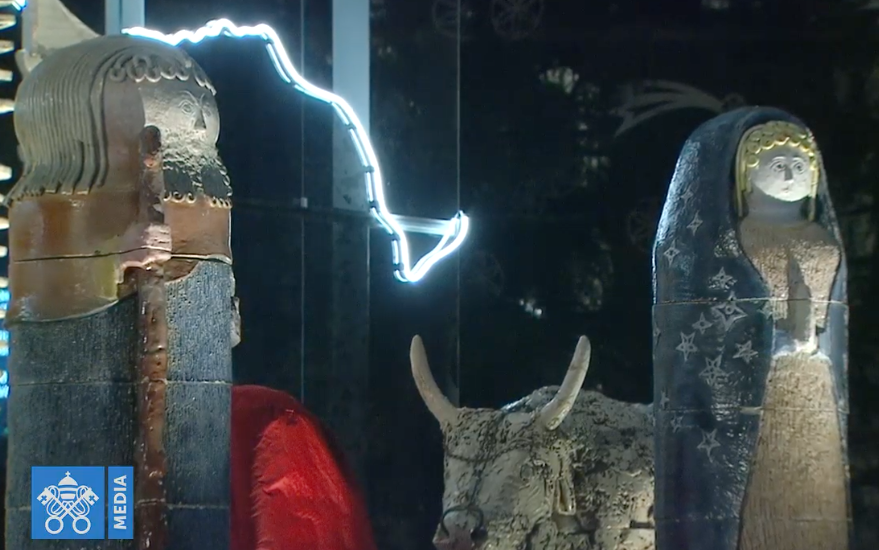 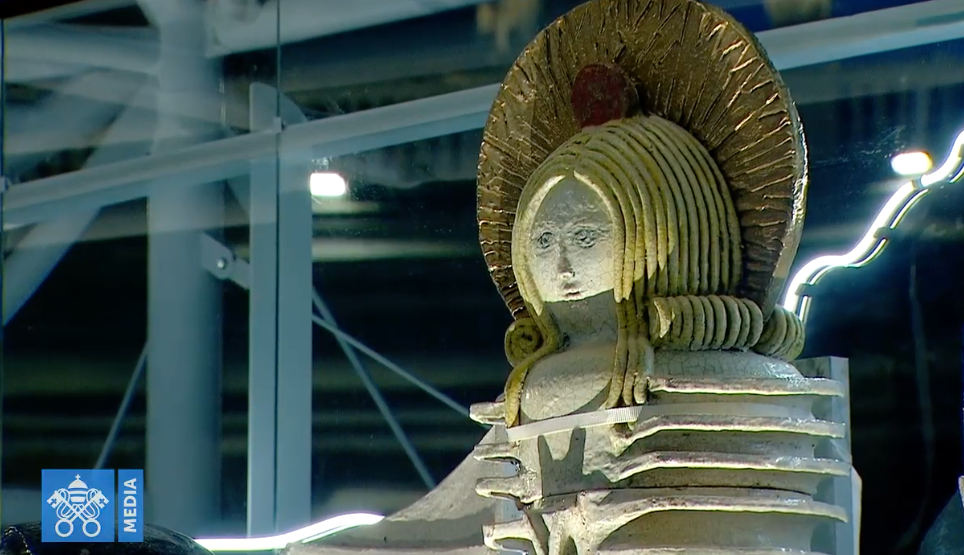 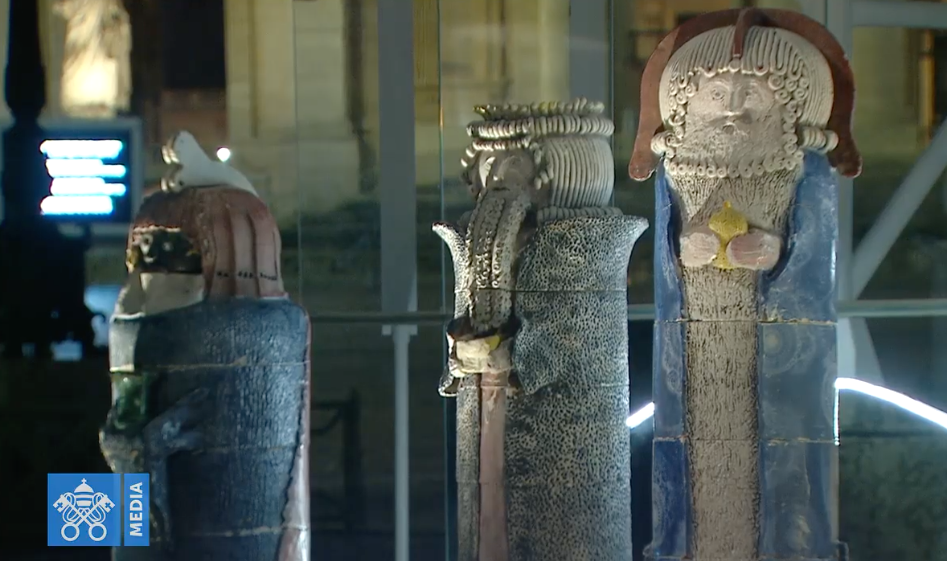 If that doesn’t inspire Christmas joy! Perhaps we should be glad that at least they didn’t “mask up” the figures, unlike in other displays.

Meanwhile, Francis tweeted: “Accompanied by the Mother of Jesus on the journey towards Christmas, in these times that are difficult for many, let us make an effort to rediscover the great hope and joy brought to us by the coming of the Son of God into the world.” A holy intention indeed — and he could have made a contribution to that by making sure that the Vatican’s Nativity scene at least doesn’t repel children and the faint of heart. An opportunity he clearly missed.

Also on Twitter, someone shared a snapshot of two mystery figures that are part of the display. They look like they escaped from a fantasy movie or a dystopian sci-fi flick: 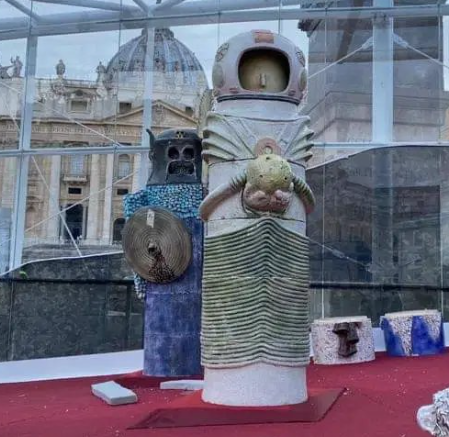 The outfit in 2001: A Space Odyssey looked better, no?

Such ugliness and sacrilege/irreverence in art is par for the course in Novus Ordo Land. Remember the hideous monstrance (monsterance!) Francis used when visiting Fatima in 2017? Ladies and gentlemen, the Vatican II Sect has been blaspheming God and the saints for decades. Why should 2020 be any different?

There have been a number of developments since we published the above post.

Rome Reports has released a brief video reporting on the unveiling of the crèche and the Christmas tree in St. Peter’s Square:

Vatican News has also published a report on the inauguration of the display, along with the following clip:

So far, the feedback on the ugliness of the Nativity scene display has been plentiful and fairly uniform:

To add insult to injury, Francis said during an address today: “The tree and the Nativity display help create the Christmas atmosphere conducive to living with faith the mystery of the Nativity of the Redeemer.”

Folks, he’s laughing at you.

Vaticanist Edward Pentin has posted a brief video on Twitter “surveying the landscape” in daylight:

At Church Militant, writer Jules Gomes has posted a substantial article covering this travesty of a Nativity scene:

Here some salient quotes from the piece:

“The crib, titled ‘Monumental Nativity,’ was designed between 1965–1975 by students and teachers from the FA Grue Art School, the Italian bishops’ media Avvenire reported.”

“…British art historian Joseph Shaw told Church Militant that ‘this year’s crib scene is not something anyone could pray in front of, however: it is anti-devotional. We can only hope it will quickly be forgotten.'”

On his blog, Italian author Aldo Maria Valli asks whether one of the figures in the Nativity display is perhaps an “incubus”.

And on a more amusing note, Louie Verrechio has put together a brief satirical clip showing an “updated” Vatican Nativity scene:

You know something is seriously wrong when even a Modernist Jesuit publication asks: “Why is Darth Vader in the Vatican’s Nativity scene?”

It turns out that this “Nativity scene” from hell has its own web site, with more pictures and information about its origins and “meaning”:

The full display set comes with as many as 54 figures. We can be thankful that we have only been subjected to a few of them. The text on the web site says: “This work represents a happy synthesis between tradition and acceptance of the new, research and experimentation.” We’ll leave that uncommented.

In case you’re wondering what the “Christ Child” figure will look like when unveiled on Christmas Eve, here’s a preview:

Fair warning: This is what the Vatican’s Nativity Scene’s “Christ Child” will look like when unveiled on Christmas Eve… #VaticanNativity pic.twitter.com/tuxa2VkKsr

By the way: On Dec. 1, 2019, Francis released the “Apostolic” Letter Admirabile Signum on the meaning and importance of the Christmas crèche. In it he states that the custom of setting up Nativity scenes is “a simple yet authentic means of portraying the beauty of our faith” (n. 3).

Francis: Violence against Women is ‘Blasphemy’ - https://novusordowatch.org/2022/11/francis-violence-against-women-blasphemy-2/ Umm... it's wrong, but it's not blasphemy! #PopeFrancis #vatican #catholicchurch #catholicnews