The first five shows present a series of sermons given many years ago by Bp. Donald Sanborn on the modernism of Vatican II. Delivered in his incredibly powerful style, Sanborn’s presentation of the errors of the council and the new religion it engendered is refreshingly clear and easy to follow.

The more you dig into the past of Jorge Mario Bergoglio – the man the world now calls “Pope Francis” – the more incredible things you find, things that make it very apparent that the man is not a Roman Catholic and has no Catholic sense for anything.

If you’ve wondered why the neo-conservative, faux-traditionalist apologists for the Vatican II Church, such as Michael Voris, Tim Haines, the Rev. John Zuhlsdorf, etc., haven’t exactly been volunteering loads and loads of raw information on just who the new “Pope” is – something you’d expect them to do for a newly-elected “Vicar of Christ” – it’s probably because the information to be found reveals a less-than-laudable picture of the man, a picture they wish to keep hidden from you.

“Anything to the Contrary Notwithstanding”: Francis Forbids “Old Mass” for Franciscan Religious Order

According to Vaticanist Giuseppe Nardi, it was a mere 6 members of the Franciscan Friars of the Immaculate — out of a total of 800 — who accomplished the prohibition of the 1962 Missal for their order by the Vatican.

What do these phrases and words all have in common? They are all found in the Traditional Roman Catholic (Latin) Mass and were systematically suppressed and eliminated from the “revised” Novus Ordo missal solemnly promulgated by the false “Pope” Paul VI in 1969.

… READ MORE
You can’t make this stuff up…

Boy, the Novus Ordo Church is really desperate for “priests”. In addition to allowing a select few married men to be “ordained” to the “priesthood”, especially former Anglican clergy, they are now going for divorced men who got their marriages “annulled” by the false Novus Ordo hierarchy. And since they dish out more marriage annulments than they distribute communion hosts in a year, they’ve got a lot of “never-married” (wink, wink) men out there, so the supply should be nearly endless now.

An article entitled “Newly Ordained Priest a Spiritual – and Literal – Father” has been published in the diocesan publication of the Novus Ordo Archdiocese of Seattle, Washington [Update: This publication is now defunct.

On June 18, 1968, Bp. Giovanni Battista Montini — then the head of the Vatican II Sect and known as “Pope” Paul VI — signed an “apostolic constitution” to change the Roman Catholic rite of ordination. These changes touched not only some of the more peripheral ceremonies but the very substance of the sacrament itself. The very words which Pope Pius XII, in 1947, had definitively decreed were necessary for the validity of the sacrament of holy orders, were changed by Paul VI in such a way as to render the ordination of priests doubtful and the consecration of bishops definitely invalid. Imagine yourself on your deathbed. Your strength is failing you; you’ve had what was probably your last meal. You are in intense agony, as the bodily suffering you are undergoing is exceeded only by the anguish of your soul because you need to go to confession but are now entirely dependent on a priest coming to you. The priest has been called, but he hasn’t arrived yet. You are afraid because you know that your soul could be parting from your body at any moment.

Comes with a “Won’t be covered by Michael Voris” Guarantee…

This is a most insightful clip revealing the real Jorge Bergoglio, the man now claiming to be the Pope of the Catholic Church — “Pope Francis”. In this video, at the 8:00 min mark, you see the then-“Archbishop” of Buenos Aires, Argentina, distribute what he supposedly believes to be Holy Communion, the very Body, Blood, Soul, and Divinity of Christ. If this had been done by the ultra-liberal apostate “Cardinal” Roger Mahony, for example, who is (rightly) one of the favorite targets of the neo-conservative Novus Ordo crowd, we would never hear the end of it, and it would be all over ChurchMilitant.TV

This is the “Great Renewal” of the Vatican II Church in action. And they wonder why no one takes them seriously! They can’t understand why they don’t have any vocations! They are shocked that more and more people leave ‘the church’! It’s simple: If this is the church, then it’s not worth belonging to it. If this is the highest act of worship of God, what, pray tell, do the lesser acts of worship look like? We are saddened to have to report the passing of Mr. Patrick Henry Omlor, one of the earliest pioneers of Traditional Catholicism in the 1960s. A Texan by birth, Mr. Omlor died peacefully at a hospital in Perth, Australia, on the feast of St. Athanasius, May 2, 2013. Like the great bishop, confessor, and doctor St. Athanasius, Mr. Omlor was not afraid to stand up for the True Faith in a time when the Novus Ordo Church began to eclipse the True Church with its modernistic teachings and false new sacramental rites.

The “Preparation of the Gifts” Replaces the Catholic Offertory

Yes, this is a clip from one of the notorious “Find-Fight-Follow” Youth “Masses” in the “Archdiocese” of Vienna, Austria. By the grace of God, this abominable desecration of Austria’s churches was ended after eight years, in 2011, reportedly due to a lack of funds. During this time, these officially-approved “youth masses” have featured everything from a “cardinal” sending text messages during “Mass,” to psychedelic vestments, role plays, stage diving, superstitious “care dolls,” throwing paper planes, pornography displayed during a sermon, rock music, disco lights, artificial smoke, flame throwers, balloons, and exceptionally provocative, ambiguous, and blasphemous event theme titles (such as “Topless,” “The Spirit is Sexy,” and “Take It All Off”).

A reminder from Guéranger that the bishops will adhere to the teachings of the pope, & that Peter's faith (and therefore his successors') will not fail.

"But I have prayed for thee, that thy faith fail not: and thou, being once converted, confirm thy brethren." -Luke 22:32 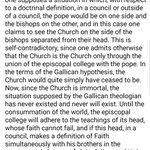 Just why are sede vacantists (the frothing at the mouth, swivel-eyed variety) so utterly obsessed with the SSPX?

Haven't they got better things to do, like work or take care of their families?

Isn't the Vatican II mess not enough for them to spew out their hatreds?

@jim50505 @ColleenEldrach1 Same as Bergoglio: destroy Catholicism in as many souls as possible - under the guise of Catholicism.

In discussing with Rome’s Chief Rabbi, a “Catholic” presbyter-professor repeats the Novus Ordo lie that Talmudic Judaism is the “root” of Christianity - https://www.catholicworldreport.com/2020/01/16/italian-bishops-promote-catholic-jewish-dialogue-as-antisemitic-speech-increases/ This 1928 reality check from Pope Pius XI comes in handy: https://novusordowatch.org/2015/11/pius-xi-jews-friends-israel/ #CatholicTwitter

Remember when Roberto de Mattei claimed that Pope John XII was deposed from the Papacy and replaced by Leo VIII? We refuted this here: https://novusordowatch.org/2019/12/was-pope-john12-deposed/ Now we have more evidence still, from Attwater’s “Dictionary of the Popes” (p. 127). #CatholicTwitter #fssp #sspx #fsspx

Naturally, all the kerfuffle about the Ratzinger/Sarah book is going to increase sales.

@ulrichlehner There is a simple answer: Scalfari has been telling the truth about what Francis told him.

Why does he still meet with this journalist? This is just as bad as the whole Sarah affair - actually worse, because he has been burnt before ("Pope does not believe in Hell" and such). https://www.katholisch.de/artikel/24231-publizist-papst-nimmt-interne-opposition-gelassen-neues-zu-benedikt