Blasphemy at Fatima:
The “Basilica of the Holy Trinity” On May 13, we celebrated the 100th anniversary of the first apparition of Our Lady of Fatima. While most people are probably familiar with the beautiful Basilica of Our Lady of the Rosary at the site of the apparitions, constructed from 1928-1953, many people may be unaware of the Modernist monstrosity that the Vatican II Sect has placed right across from the traditional basilica. It is officially called the “Basilica of the Holy Trinity” and was opened in 2007. In 2004, when construction was just beginning, “Pope” John Paul II gave a fragment of the Vatican’s tomb of St. Peter to be used as the foundation stone for this blasphemous house of horrors:

The following snapshots of the “basilica” speak for themselves. They are photos that need to be seen to be believed.

The last picture shows a bird’s-eye-view of the pancake-griddle-shaped “church”. The inside reminds one of the United Nations meditation room or security council chamber more than a Catholic sanctuary. The grotesque stick-figure abomination outside the building is supposed to be a “Crucifix”. 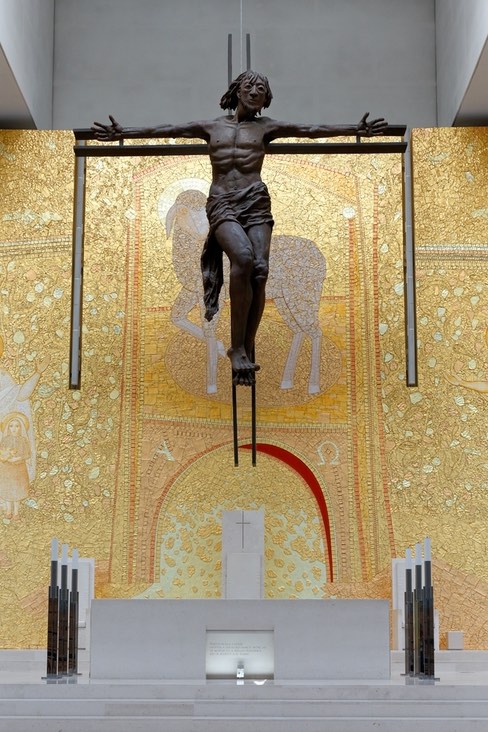 This particular image is a screenshot taken from Google Maps (C) 2020 CNES/Airbus, Maxar Technologies (fair use)

For those who are interested in more than just still shots of the site, we also have some video showing the “Basilica of the Holy Trinity”, incl. some footage of its dedication ceremony 13 years ago:

The ugliness of it all speaks volumes: It is the architectural expression of the Novus Ordo religion. For this reason alone it cannot be anything other than ugly.

That the “Basilica of the Holy Trinity” should be located right across from the Basilica of Our Lady of the Rosary is very fitting. After all, “right across from” means it is directly opposite the true Basilica, thus unwittingly expressing even in its very location that it stands in opposition to Our Lady of Fatima. This is an accurate reflection of the anti-Fatima attitude of the Novus Ordo Church, which was most recently displayed again by “Pope” Francis in his visit to the site.

Two recent blog posts on the Modernist architectural abomination at Fatima are worth reading:

The official web site of what is collectively known as the “Sanctuary of Fatima” can be accessed here.

May Our Lady of Fatima intercede for us, deliver us from the apostate Novus Ordo Sect, and restore to full view and glory the one, holy, Catholic, and apostolic Roman Church.

30 Responses to “Blasphemy at Fatima: The “Basilica of the Holy Trinity””