In case you missed our initial announcement on Aug. 15: We have published another full-length episode of our popular TRADCAST podcast program. As always, it is loaded with real traditional Catholicism, insightful commentary, hard-hitting refutations of various errors, and razor-sharp analysis. Our content is typically challenging but is always delivered in an accessible way with a relieving touch of humor, so necessary in our chaotic and bizarre times.… READ MORE

Time for a sobering reality check…

Michael Voris: ‘We have viewed the Pope Francis Papacy as very Problematic from Day One’ On Feb. 18, 2022, Michael Voris hosted a special live broadcast on his Church Militant web site entitled “Is Bergoglio really the Pope?”. Not that anyone working for the Detroit-based media operation was beginning to doubt the legitimacy of Francis, but perhaps more and more people in their audience can no longer stomach the “papal” apostate from Buenos Aires.

In our powerful new podcast episode, TRADCAST 033, we take many of Michael Voris’s claims to task.… READ MORE 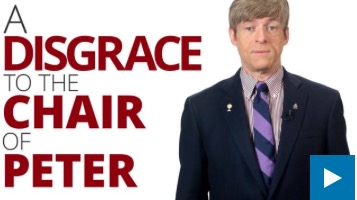 Francis, Voris & the Washing of the Feet

The video above is fairly self-explanatory. It’s time to turn off Michael Voris and look the ugly facts straight in the eye: The “Church of Nice” also has a “Pope of Nice.” Francis is as much a part of the problem as the entire Novus Ordo religion of which he is, after all, the head.

The world needs truth, not lies or half-truths; and we need people who are willing to uncover and follow the truth no matter to what undesirable conclusions it may lead.

Michael Voris likes to present himself as the great no-compromise anti-liberal bulldozer, yet he refuses to condemn “Pope” Francis for what he excoriates other liberals for. … READ MORE The Vortex, a news and commentary broadcast from a “conservative” Novus Ordo perspective, is the flagship program of ChurchMilitant.TV (an organization that was previously named RealCatholicTV).

We have long published severe criticisms of The Vortex and its host Michael Voris — not for being Novus Ordo, but for using a most hypocritical double standard when it comes to criticizing liberalism: Voris very happily trashes liberals and their anti-Christ agenda at every opportunity (and rightly so), yet he absolutely refuses to apply the same standard to the most powerful and dangerous liberal in the entire Vatican II Church: “Pope” Francis.… READ MORE