Akin vs. Akin: Let’s get Technical! Which Jimmy Akin will you read today?

It’s funny how things work in Novus Ordo Land, where the main focus is not on defending the truth but on defending the increasingly absurd idea that Jorge Bergoglio is the Pope of the Catholic Church (“Francis”).

Jimmy Akin is a senior apologist at so-called Catholic Answers in California, and he is notorious for coming quickly to Francis’ defense whenever the latter opens his Modernist mouth and says what he really thinks, which is usually at odds with Catholic doctrine and dogma.

A Follow-Up on Francis’ Candid Remark… 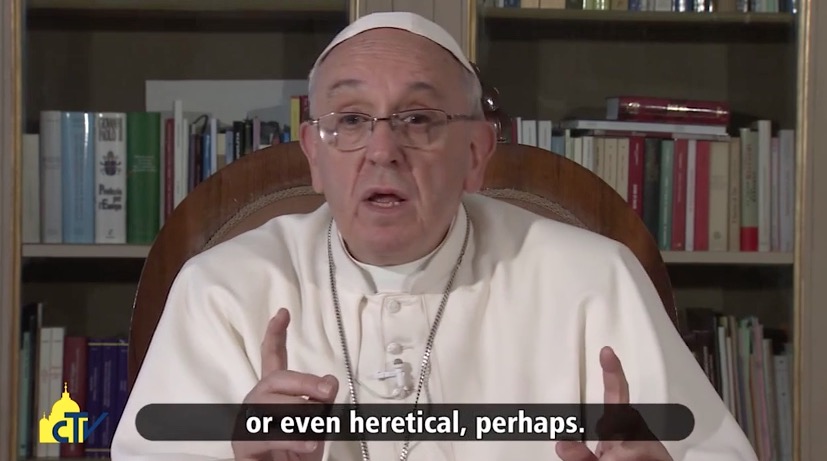 Heresy in a “Pontifical” Message? Who cares? Certainly not Francis!

The times we live in are so absurd, they make the television show Twilight Zone look like reality TV by comparison. Two days ago we reported on “Pope” Francis’ video message to the ecumenical John 17 Movement in the United States, which he released on May 23, 2015. As the full video had not yet been released at the time of our posting, nor a full transcript in the original Spanish, we relied on the English translation provided by Vatican Radio.

Francis in Message to Ecumenical Event: “I want to say something that may perhaps be a Heresy, I don’t know” —UPDATED

UPDATE 28-MAY-2015 03:05 UTC: Now that the full message in the original Spanish has become available, we have published a follow-up post that examines Francis’ actual words and responds to attempts to render them harmless:

UPDATE 26-MAY-2015 22:45 UTC: The Vatican web site has released a transcript of Francis’ actual words in Spanish, which reveals that what he actually said is even worse than the initial translation from Vatican Radio suggests:

We will soon publish a follow-up post on this matter right here at the Novus Ordo Wire, and our next TRADCAST podcast will be dedicated entirely to this story.

Video: Francis’ Appeal to Ireland to Vote NO on Same-Sex ‘Marriage’

In an internet exclusive, we present to you the heartfelt appeal issued by “Pope” Francis to the Catholic people of Ireland, and all men of good will, exhorting them to oppose the attempt to legalize same-sex “marriage.”

Come on, don’t be so hard on him. He’s busy writing a huge encyclical on the environment! You know, climate change, recycling, etc. Who’s got time for such backwards stuff as speaking out against perverts’ attempts to change a natural institution that is necessary for the survival of humanity?

Sermon Series:
“Satan will Try to Deceive Even the Elect”
Part 1 Most Rev. Mark A. Pivarunas

As part of their ongoing broadcast series “From the Pulpit,” our friends at The Restoration Radio Network are making available a very informative multi-part presentation by His Excellency, Bishop Mark Pivarunas, CMRI, on the ways in which Satan is trying to deceive even the elect, as warned by our Blessed Lord Jesus Christ in Matthew 24:24: “For there shall arise false Christs and false prophets, and shall shew great signs and wonders, insomuch as to deceive (if possible) even the elect.”

On May 12, 2015, the leader of the Vatican II Sect, Jorge Bergoglio (“Pope Francis”), used the opportunity of the 20th General Assembly of Caritas Internationalis to preach a sermon advancing his false humanist gospel that reduces the essence of Christianity to the service of the earthly needs of our neighbor, as though God became incarnate simply to encourage us to feed the hungry, shelter the homeless, and give alms to the poor. Wouldn’t want to let Christ get in the way…

The Beatles couldn’t have said it better…

Days after the ugly and ambiguous logo for the “Year of Mercy” 2015-16 was revealed, the Vatican has now unveiled the emblem for the next item on the Francis Show: Jorge Bergoglio’s visit to the United States of America in September 2015. You can see the logo as released by the so-called “United States Conference of Catholic Bishops” above.

Overall, the logo appears rather sterile, with no clear identity other than the figure that has its back turned toward you.

I can’t believe it’s not Catholic: The “SoulCore” Rosary Exercise Program!
Find out what the Blessed Virgin forgot to give St. Dominic!
CAUTION! IMMODEST POSTURES

“See what things the enemy hath done wickedly in the sanctuary” (Ps 73:3)… You may want to put on your surprise face if you still have one left at this point. On April 25, 2015, we reported on a scandalous prayer event in a Catholic Church in Belgium: A Novus Ordo presbyter had given a funeral-like service to a dog, a chihuahua, to “accompany” the people in their “grief” and extend “compassion” to them. He specifically pointed out that he was doing this as part of a response to “Pope” Francis’ call for reaching out to the “peripheries” of society.

Restoration Radio’s new show “Escape from the Novus Ordo” returns with Fr. Michael Oswalt, a former Novus Ordo “priest” of the diocese of Rockford, Illinois, who converted to traditional Catholicism (sedevacantism) and was ordained a true priest in 2011. He has penned an open letter to his former diocese of Rockford, Illinois, in which he explains why he left the Novus Ordo religion. The letter is available in English and Spanish:

A twisted image for a twisted “mercy”…

The Vatican’s “Year of Mercy”
Logo Fails to Surprise

The Vatican has unveiled its logo for the upcoming supposed “Year of Mercy” that begins on December 8, 2015 and runs through November 20, 2016. Click on the image to see a larger version. Out of all the things they could have done, this is what they came up with: Christ looks like He is skateboarding or ice-skating, He carries a man sideways on His shoulders, and there are three eyes visible, the center one clearly being shared between Christ and the man. One could also say that the image is ambiguous and appears to depict a Christ with two heads and three eyes.

At this point, the Vatican II apostasy is so advanced that prior papal teaching is now being denied verbatim by the “Pope” of the Novus Ordo Church, without so much as batting an eye.

Consider what Francis said to the (female) Lutheran “Archbishop” of Sweden, Antje Jackelen, whom he received in audience today, May 4:

Pope Francis received the Lutheran archbishop of Sweden in audience on May 4 and said that the Christian division contradicts the will of Christ, scandalizes the world, and harms the cause of the preaching of the Gospel.

‘Inside the Vatican’ on Francis and the civil union for homos controversy - https://insidethevatican.com/news/newsflash/letter-30-wednesday-october-21-2020-redemption/ #PopeFrancis

The Masons always argued that a Pope’s position on morals was only a private religious opinion and couldn’t be applied to the civil order. Now semi-trads do the work for them because they don’t want to be Sedevacantists.

These must be part of that collective witness testifying infallibly that Fracis is Pope - according to John Salza, that is. 😂

45%: Roe v. Wade should be upheld
25%: it should be reversed, abortion should be ruled unconstitutional.
18%: return issue to the states
13%: unsure
https://www.catholicnewsagency.com/news/where-catholic-likely-voters-stand-on-issues-candidates-ahead-of-presidential-election-75386

Modernist ‘Cardinal’ Müller: Francis’ words on gay civil unions ‘purely private expression of opinion, which every Catholic can and should freely contradict’ - https://www.lifesitenews.com/blogs/cdl.mueller-popes-words-on-gay-civil-unions-purely-private-expression-of-opinion-which-every-catholic-can-and-should-freely-contradict That’s beside the point. The point is it *is* his opinion! #PopeFrancis #CatholicTwitter

OK, folks, which would you like to see next on Novus Ordo Watch? Commentary on Fratelli Tutti; commentary on interreligious prayer meeting in Rome; follow-up and reaction roundup on yesterday’s civil union controversy? It’s hard to make a decision here…

@ColleenEldrach1 @stalin_great Well, almost. The only thing they’re not planning on doing is denounce the fake hierarchy as fake — but thereby they are promoting the precise crime of schism.

@stalin_great Um. You do realize you could accomplish this simply by becoming sedevacantists? This is exactly what we have been doing for 60 years already.