On Sunday, Nov. 18, 2018, on the occasion of the Vatican-created World Day of the Poor, the Modernist pseudo-shepherd invited 700 needy people to a professionally-catered luncheon inside the beautiful church of St.… READ MORE This “youth cross” exudes all the spiritual maturity of a toddler — it looks like it was put together by a two-year-old playing with foam play mats.… READ MORE 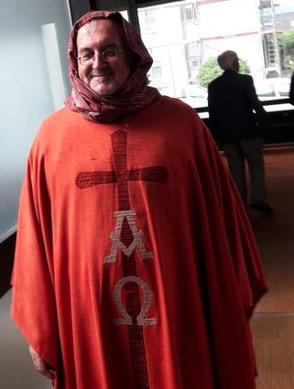 The absuridty, impiety, sacrilege, and wickedness of the Vatican II Sect knows no bounds. The following video was taken at São Geraldo Majella (St. Gerard Majella) church in Sorocaba, Brazil, located in the “archdiocese” of Sorocaba. It is staffed by Novus Ordo Redemptorist presbyters:

[We had to remove this video from our YouTube channel for copyright reasons.]

The original video can still be viewed on Facebook here

For those unable to play the video: The Novus Ordo version of the Blessed Sacrament (mere bread and wine because invalid due to defect of form, sometimes defect of matter, and almost always defect of valid minister), enclosed in a monstrance, is lifted off the ground by a remote-controlled drone at the entrace of the church.… READ MORE

Pokémon at the Vatican:
The Youth Synod’s Preliminary Meeting

One can only face-palm at the aesthetic junk that emanates from the Vatican II Sect, which is a perfect mirror of its disastrous theology. With a logo apparently being needed for every significant event, here is the one they put together for their pre-synod meeting with the youth, which is currently taking place in Rome:

The question that inevitably arises is: What in the world is this? Four Poké Balls decorating a Christmas tree? Billiard balls caught in a ventilator? …Or what?? Like with many other Novus Ordo logos and emblems, this image too is just screaming spiritual maturity and sophisticated theology, isn’t it?… READ MORE One of these three is not a Novus Ordo priest…

It’s that time of the year again: While real Catholics observe the subdued pre-Lenten season of Septuagesima to prepare for the forty holy days of penance known as Lent, the Novus Ordo Sect rolls out its jolly “Fools’ Masses” (Narrenmessen) again, at least in Europe.

A new low has been reached in an abombinable spectable that just took place this past Sunday, Feb. 4, at St. Gangolf church in Heinsberg, Germany, part of the diocese of Aachen.… READ MORE How’s that for the “mark of the beast”!

You can’t make this stuff up: A prominent Novus Ordo adherent has launched an apparel campaign with a logo that is supposedly meant to encourage people, especially youth, to become saints. The acronym the campaign is using as the logo for its apparel is — we kid you not — “BEAST”. It is allegedly short for “Be A Saint”, i.e. “Be A St.” The logo is displayed above.

The celebrity co-founder of the BEAST campaign is Luke Vercollone, an American soccer player, who is described on the official web site as a “practicing Catholic with a passion for the Bible, ecumenism and Christian unity” (source).… READ MORE