No, it’s not satire… 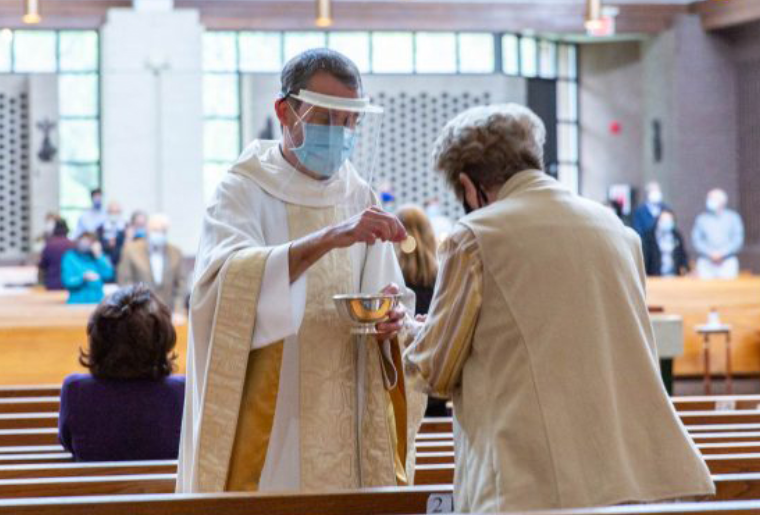 The Prophetic Church of the Second Vatican Council just never runs out of gifts, movements, or ministries. The latest one is the “ministry of hand sanitizer” introduced at a Jesuit-run parish in Raleigh, North Carolina.

North Carolina’s "Media Hub" focused on how St. Raphael Church in Raleigh has adapted to the pandemic. Fr. Phil Hurley, SJ, not only dons mask and face shield during communion but has also incorporated a new type of minister—ministers of hand sanitizer. https://t.co/QklEmA4cdc pic.twitter.com/To2KqbObDQ

The news article by the University of North Carolina’s Media Hub referenced in the tweet states:

At St. Raphael Catholic Church in Raleigh, Father Phil Hurley walks around the sanctuary with a procession of volunteers who have a new, unexpected—and unofficial—title in the Catholic Church: the Ministers of Hand Sanitizer.

Now, parishioners lift their hands to receive and apply hand sanitizer from a minister [before receiving “Communion”]. Then, Hurley, donning a facemask and a face shield, approaches each parishioner and places the wafer in his or her hands. The parishioner replies with the customary “Amen,” but waits patiently for Hurley to move at least 6 feet away to consume the wafer.

Just a year ago, this story would have been derided as surely being from The Onion or The Babylon Bee, clearly fake news meant only for satirical purposes. But reality is stranger than fiction. As we like to say here: You can’t make this stuff up!

What is there to say? Should we be grateful that at least they’re not making people lick the “host” off a saucer — unlike other parishes?

To clarify for those who may be new to our site or our position: We believe firmly in the dogma of Transubstantiation as defined by the Council of Trent, but we do not believe that the Novus Ordo Mass is valid or that Novus Ordo priests are. Hence, the “Communion” they distribute is in actual fact just bread, although that is not what they — officially — believe.

The following video shows the Nov. 22 “Mass” at St. Raphael’s, and beginning at the 1:09:54 timestamp, the Rev. Hurley gives instructions on how the “Holy Eucharist” will be distributed to those present:

Since they are so meticulous in ensuring that not a single germ shall survive the holy hand sanitizer, it would be great if these people could be just as attentive to what they profess to believe is the Blessed Sacrament, whose every particle contains the whole and entire Christ: Body, Blood, Soul, and Divinity (see Council of Trent, Session 13; Denz. 876, 885). Judging by the way “Fr.” Hurley handles the (invalidly consecrated) sacred species, it appears that he either does not believe in the Real Presence or he thinks that man is of greater concern than God Himself, or that the health of the body is more important than the health of the soul (cf. Mt 10:28).

Certainly, “Fr.” Hurley is not doing anything unusual here by Novus Ordo standards. In the Conciliar sect of progress and enlightenment, it is common practice to handle the Eucharist pretty much like popcorn and to omit the ablutions (purification) of the fingers. In fact, since Novus Ordo priests use not just their index finger and thumb to touch the Blessed Sacrament, they would really have to purify their entire hands.

On second thought, let’s not give them any ideas….