For the sacred season of Lent, Schonborn’s man in charge of the cathedral, “Fr.” Anton Faber, had the Austrian artist Erwin Wurm, who appears to specialize in the bizarre and the disturbing, design and put up a special Fastentuch (“Lenten cloth”). The result is what you see above: a gigantic, hideous-looking knitted purple sweater covering the gorgeous mural of the martyrdom of St. Stephen and, more significantly, the Catholic high altar beneath it.

Without the Fastentuch, this is what the high altar of St. Stephen’s typically looks like — it’s not surprising that the Modernists would want to hide it: 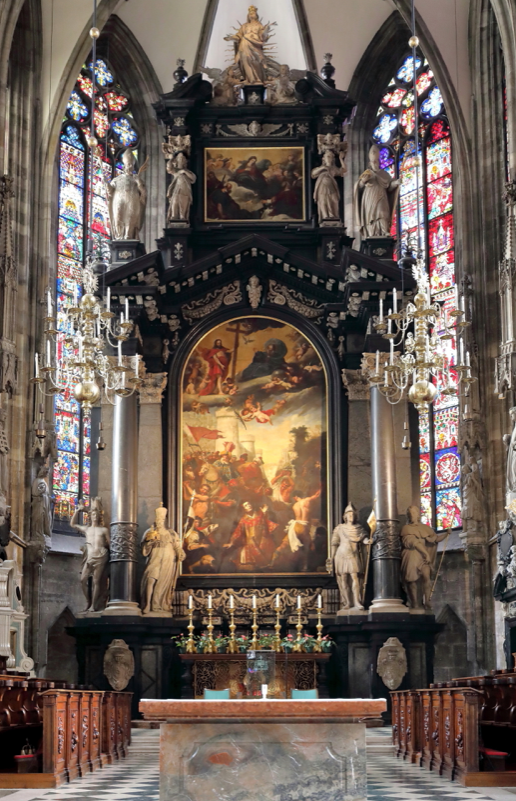 The covering of paintings, statues, and plaques during Lent, especially during Passiontide, is certainly a traditional custom. But this is not what’s happening in the cathedral currently occupied by the Satanic “Cardinal” Schonborn and his henchmen. The intent here is clearly to distract, to mock, and to defile. Similar Lenten “art” installations in the cathedral in prior years underscore this; for example:

According to Canon Faber, the official explanation for the idiotic oversized sweater is that it is to remind people of the “priority of the warming love of neighbor” we are to practice during Lent, the Austrian Kronen-Zeitung reported on Feb. 20.

But this is not the only Lenten defilement in the cathedral this year. In addition to the Angelo-Roncalli-sized sweater, other works by Erwin Wurm are on display in and around the church, though presumably none of his sexually perverted ones. The article in Kronen-Zeitung refers to them as “mainly disfigured or deformed sculptures — such as a boxing glove, deformed houses, a body without head, hands, or feet, or bags with legs.”

Of course all this garbage comes with an incredibly spiritual message: Wurm wants you to think about your “own limitations” as his works point out the “distortions in our lives.” Perhaps he’ll figure out one day that his works reflect the distorted soul of the artist.

By the way, “Wurm” is German for “worm”. Interestingly enough, our Lord described hell as the place “where their worm dieth not, and the fire is not extinguished” (Lk 9:43).