Things are heating up…

“Cardinal” Burke: Francis Not in Heresy, but Heretical Pope would Lose Office automatically

The Amoris Laetitia controversy is far from over. If anything, it’s entering now into its hottest phase yet.

American “Cardinal” Raymond Burke has recently given some interviews on the dubia and their non-response by “Pope” Francis and explained what is to happen next if the dubia remain unanswered. Previously Burke had already threatened a “formal act of correction” against Francis, but without giving details or a timeline. Now Burke has upped the ante.

On December 15, 2016, EWTN’s Raymond Arroyo interviewed the Novus Ordo cardinal on his nightly news program, The World Over.

These days a good portion of the Novus Ordo world is up in arms about “Pope” Francis’ attempts to permit unrepentant public adulterers to receive the [Novus Ordo] sacraments, and rightly so. A veritable schism seems to be forming at this time, as countless clergy and laymen are rallying behind the four no-compromise “cardinals” who have made it clear that they will not stand for this attempt to dispense from the Sixth Commandment.

“Bishop” Schneider rocks Rome, accuses Francis of promoting “The Joy of Adultery” by pretending to Dispense from the Sixth Commandment The prelude to a formal schism within the Novus Ordo Sect has just reached a new stage: On Monday, Dec. 5, 2016, the Rome-based Lepanto Foundation held a conference in the Eternal City on Christian marriage and the errors of “Pope” Francis’ exhortation Amoris Laetitia. The well-attended conference was hosted by the Foundation‘s president, Roberto de Mattei, and took place only about 3 miles from the Vatican.

Athanasius Schneider on French TV:
“A certain kind of Schism already exists in the Church” On Sunday, Dec. 4, 2016, the internet-based French television station TV Libertés aired an installment of its program Terres de Mission. One of its guests was Athanasius Schneider, auxiliary “bishop” of Maria Santissima in Astana, Kazakhstan, who was interviewed about the fallout from the dubia submitted to “Pope” Francis to receive clarification on certain points contained in the “Apostolic” exhortation Amoris Laetitia. The entire program can be watched in the original French here.

We have taken the portion of the broadcast that contains the interview with Mr. On Nov. 29, the Spanish web site Religion Confidencial published a report according to which the dean of the Novus Ordo Sect’s Roman Rota — the Vatican’s highest appeals court — had issued a threat against the four “dubia cardinals” Burke, Brandmuller, Meisner, and Caffarra, basically for challenging Francis in public to either fish or cut bait, as it were, regarding “Holy Communion” for adulterers and other more basic moral issues in the “papal” exhortation Amoris Laetitia.

CDF Head “Cardinal” Müller on the Dubia:
“Cannot get involved in the Dispute”

In an interview published on Dec. 1, 2016, by the German Dom Radio, the head of the Vatican’s Congregation for the Destruction of the Faith, “Cardinal” Gerhard Ludwig Muller, has weighed in on the ongoing controversy over Amoris Laetitia, specifically the five “doubts” (dubia) submitted by “Cardinals” Burke, Caffarra, Brandmuller, and Meisner.

Due to time constraints we are not able to translate the entire interview, but we will give you the most important parts:

This letter [of the dubia submitted by the four “cardinals”] was addressed to the Pope himself and contained questions regarding the correct interpretation of Amoris Laetitia.

Dean of Roman Rota: “Four Cardinals who have written to Pope could lose their Cardinalate”

We all know that Francis is the champion of dialogue and encounter, but when “Cardinals” Burke, Brandmuller, Meisner, and Caffarra recently did nothing more than ask five very specific questions on a very important theological matter they wanted clarification on, the ever-so-humble Argentinian bridge builder decided to put up a wall: In a defeaning silence, he simply refused to answer.

The formal request submitted by “Cardinals” Caffarra, Meisner, Burke, and Brandmuller for clarification of five specific points in the infernal exhortation Amoris Laetitia (the so-called dubia, or “doubts”), was released to the public this past Monday, since for almost two months the “Sovereign Pontiff” had refused to give them the courtesy of a response. “Cardinal” Burke added more fuel to the fire by saying in a follow-up interview that the next step would be to confront Francis with a “formal act of correction” should he persist in his errors.

Vatican Theologians reportedly studying what to do about a Heretical Pope The fireworks just keep on coming. As the reliable Vaticanist Giuseppe Nardi reports today, a 1975 theological study by the learned Brazilian layman Arnaldo Vidigal Xavier da Silveira is currently making the rounds in the Vatican, and it’s not just any study: It’s a study on whether it is possible for a Pope to be or become a heretic, and if so, what consequences would follow from this.

What might possibly have given occasion for Vatican theologians to occupy themselves with such abstruse thoughts? Have they all gone into studying abstract hypotheses for the sake of sharpening their intellects?

When on Monday, Nov. 14, the Italian journalist Sandro Magister published the five dubia submitted to Francis by “Cardinals” Caffarra, Burke, Brandmuller, and Meisner in September, requesting a “clarification” on various controverted points found in the Bergoglian exhortation Amoris Laetitia, it was certain that “clarification” was just a smoother-sounding code word for “retraction”. There is, after all, nothing left to clarify: The exhortation is a most dangerous document subversive of the very foundations of Catholic morality that brazenly attacks the indissolubility of the marriage bond; and Francis has already confirmed, sometimes more, sometimes less openly, that any ambiguous passages are to be understood in their heretical sense.

Boy, things are really hitting the fan now over Amoris Laetitia. As the Italian conservative Novus Ordo journalist Sandro Magister revealed on his blog today, there is a pro-Francis “secret police” at work in Rome now, bullying Novus Ordo academics into compliance with Francis’ new-found perverted morality as laid out in the “Apostolic” exhortation Amoris Laetitia. This is the document that effectively permits unrepentant fornicators and adulterers — and, at least by extension, also practitionors of unnatural vice — to receive the Novus Ordo sacraments. One may say it’s an Ottaviani Intervention for Novus Ordos: “Cardinals” Raymond Burke, Joachim Meisner, Walter Brandmüller, and Carlo Caffarra have taken the formal step of submitting an official set of dubia (“doubts”) to the “Pope”, presenting him with five specific questions pertaining to the disastrous and controversial “Apostolic” Exhortation Amoris Laetitia, which he released in April of this year. These five clear questions demand five clear answers: yes or no. 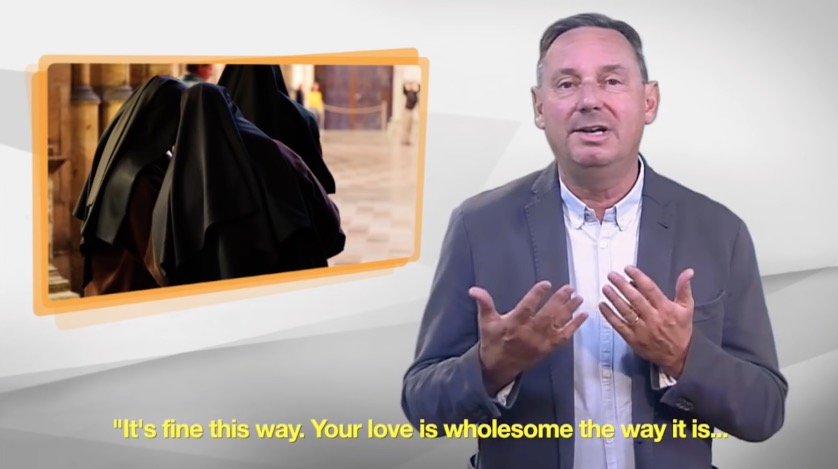 One day after blasphemously declaring that seeking the conversion of non-Catholics is a “great sin against ecumenism”, “Pope” Francis has now weighed in on how to provide pastoral care to people who are not sure whether they are male or female or something else entirely (so-called “transgender” people).

In the much-anticipated in-flight “papal” interview aboard the plane taking him back to Rome from Azerbaijan, where the number of Francis adherents can fit in an elevator, the Argentinian Jesuit was asked by a journalist what he would “say to those who are suffering and feel that their sexual identity does not correspond to their biological one”. Michael Matt, Christopher Ferrara, and John Vennari have had enough. After three-and-a-half-years of open apostasy by Jorge Bergoglio (“Pope Francis”), the semi-traditionalist newspaper trio have decided to upgrade their resistance from merely providing critical commentary and launching petitions, to issuing a Liber Accusationis (“Book of Accusation”) against the man they believe is the Vicar of Jesus Christ on earth. The charge in a nutshell: He just ain’t a Catholic. (This is something we actually pointed out from the very beginning, while Matt and Ferrara were still trying to spin Francis into a Catholic, but okay.)