Abu Dhabi heresy published in ‘Acts of the Apostolic See’… It was three years ago today, on Feb. 4, 2019, that the Argentinian apostate Jorge Bergoglio (“Pope Francis”) joined the Egyptian Grand Imam of Al-Azhar, Ahmed Al-Tayyeb, in signing a common declaration entitled A Document on Human Fraternity for World Peace and Living Together. This took place as part of an interreligious meeting in Abu Dhabi, United Arab Emirates (video here).… READ MORE 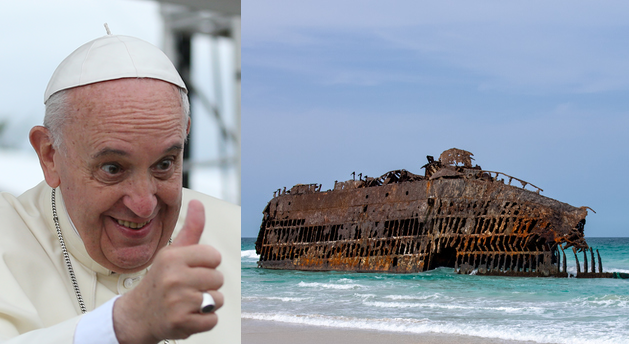 “Pope” Francis is currently visiting the United Arab Emirates (UAE), a very brief trip that will conclude tomorrow, Feb. 5. The main objective of the visit has been to attend an interreligious meeting on “human brotherhood” at The Founder’s Memorial in the capital of Abu Dhabi and sign a joint declaration with the Grand Imam there. This Francis did today.

Before he took part in the interfaith conference, however, the Argentinian pseudo-pope paid a visit to the Crown Prince of Abu Dhabi and held a closed-door meeting with the members of the Muslim Council of Elders in the Grand Mosque of Sheik Zayed.… READ MORE