With a “Roman Catholic” resident in the White House now who actively supports not only the crushing, cutting, and vacuuming of preborn babies out of the natural habitat that is their mother’s womb, but also the tax-payer funding thereof, the issue of “refusal of Communion” is once again a topic in the U.S. media landscape.

Since this is a highly-nuanced theological issue involving great moral complexity [irony off], the American Novus Ordo bishops are not in agreement with one another but are mainly divided into two camps. Prelates such as Olmsted, Chaput, and Strickland are on one side; and prelates such as McElroy, Cupich, and Gregory, are on the other. (Of course we know which camp is favored by the “Pope”.)

The purpose of this post is to demonstrate to those who may not be aware, that this controversy is nothing new. It has been going on for decades, and this means that we can all rest assured that despite all the blustering from this bishop or that, nothing will ever be done about it. All those who have their hopes up that in the foreseeable future, there will be some kind of resolution to this, are only fooling themselves therefore. Nothing of substance will happen. Certainly, the Vatican might release yet another document (hooray!), but what will definitely not happen is concrete and meaningful disciplinary action against scandalous “Catholic” politicians, or against the clerics who, in violation of their own church law (see Canon 915), would admit them to “Holy Communion”.

To underscore how long this has been going on, with a net effect of virtually zero, we will now take a brief look at some news stories from long time ago that will sound eerily familiar.

The date of the first article we present is Dec. 30, 1989. It was printed in the St. Louis Post-Dispatch (external link here): 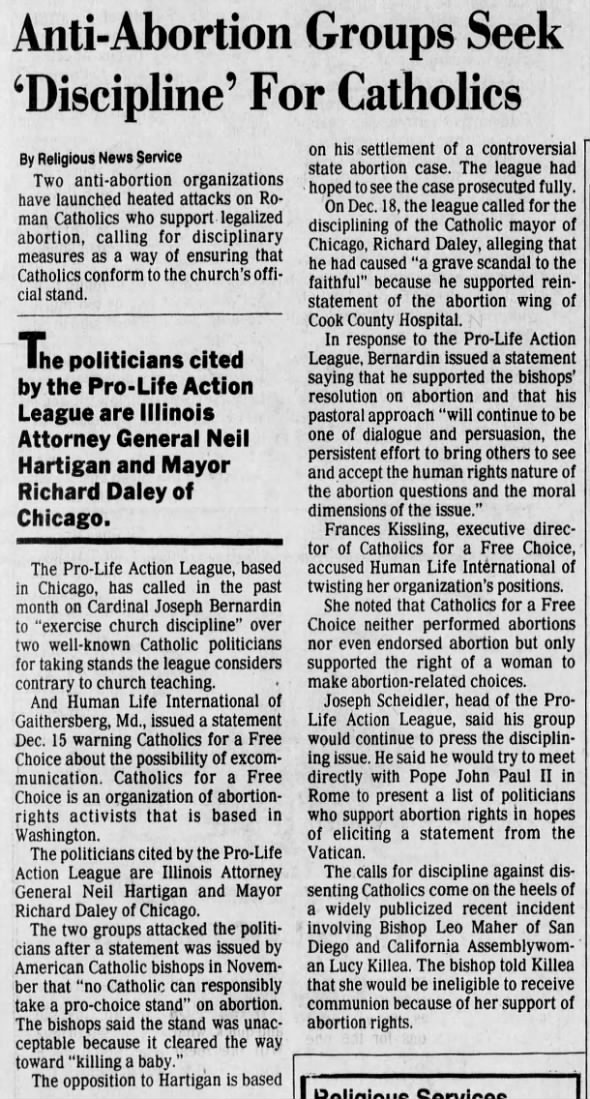 By Mar. 18, 1990, the Oregon Statesman Journal reported that the above-named Lucy Killea “is the only known case where a Catholic politician has been denied communion because of abortion views.” Perhaps the first four letters of her last name had something to do with that as well.

Nine years later, in a Feb. 25, 1999, article of The San Francisco Examiner, we read of a conservative Novus Ordo politician opining that “bishops should withhold communion from Catholic politicians who support abortion rights” — something they were obviously still not doing.

Five years later, during a presidential election year in the U.S., the same topic came up yet again as one of the high-profile contenders was a Novus Ordo. This time, even a Vatican “cardinal” chimed in, but only after being asked to comment by reporters. The Fort Worth Star-Telegram edition of Apr. 24, 2004, printed the story, which reads as if it had been written today (external link here): 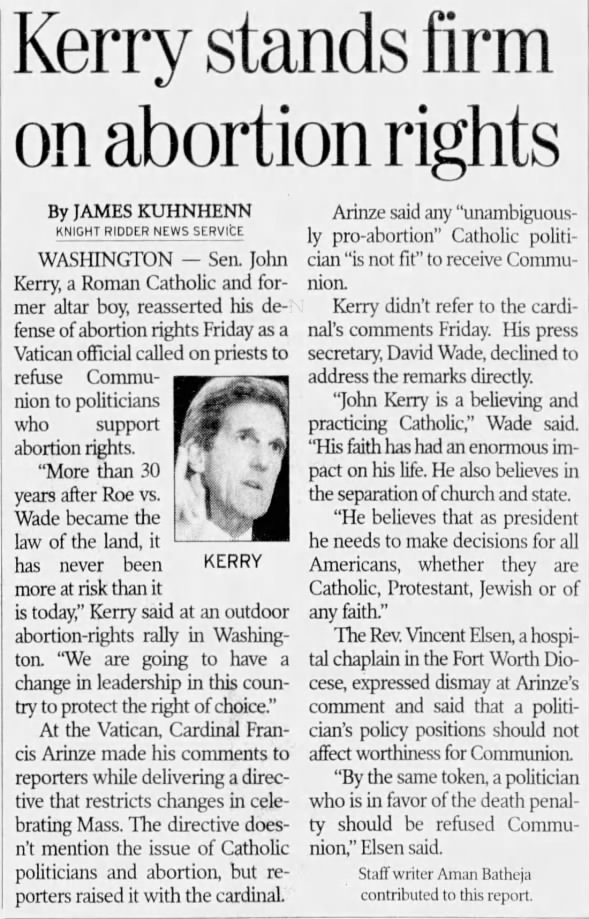 We are now in 2021, and just recently, the thoroughly useless American Novus Ordo bishops have floated the idea of releasing a really tough document on the issue — you know, because the whole problem has been a lack of words about abortion and church teaching! Interestingly enough, the Vatican’s “Cardinal” Luis Ladaria, the Jesuit in charge of the Congregation for the Destruction of the Faith, has made clear to “Abp.” José Gomez, the head of the so-called United States Conference of Catholic Bishops (USCCB), that maybe that isn’t such a terrific idea. The following news stories explain:

Ladies and gentlemen, do not be deceived. This perpetual back-and-forth is a circus designed to keep you busy and distracted. While you are hoping and praying that the Vatican II Sect will eventually get around to doing something about the great evil that is allowed to flourish under the cover of “Roman Catholicism”, the apostasy is advancing at full throttle. And signing the umpteenth LifeSite petition or writing to your local “bishop” won’t change that. If God doesn’t intervene and the Novus Ordo Sect is still around 20 years from now, we can be sure that the same controversy will be a hot topic then.

Recently, Thomas Paprocki, the conservative Novus Ordo bishop of Springfield, Illinois, proposed that “Catholic” politicians who support the vacuuming, crushing, and cutting-up of children in the womb should examine their conscience first to determine if they are perhaps not entirely fit to receive what they profess to believe is the Body, Blood, Soul, and Divinity of God Incarnate. Of course such an examination would presuppose that there even is a conscience to examine, which in the case of such people may be doubted; but perhaps the American Novus Ordo bishops can fix that problem by issuing a document on that as well.

The fact of the matter is that the “Pope” could put an end to this whole thing any time he wanted to. But Francis is someone who, when it comes to abortion, likes to talk tough, all the while his actions tell a different story: Speaking of Francis and refusal of “Communion”, let us never forget: With his infernal 2016 exhortation Amoris Laetitia, “Pope” Francis has officially given the nod to giving Novus Ordo communion even to those few people in his sect who didn’t manage to get a marriage annulment and live in open adultery — courtesy of the “concrete complexity of one’s limits” (n. 303)!

From all the foregoing, however, it would be wrong to conclude that there is nothing one can do to be denied the “Eucharist” in the New Church.

A sure way to be refused is to attempt to receive kneeling: