We have posted on this topic before, but the issue is so serious that it really bears repeating: There are a lot of people in the Vatican II Sect who deny the Catholic dogma that Jesus Christ rose physically from the dead. This denial is a pet tenet of Modernism, which denies all miracles. Modernists reject genuine miracles because they loathe the supernatural and do not have Faith. It should come as no surprise, therefore, that many in the Novus Ordo Church deny even the very dogma of the Bodily Resurrection of Christ, which is the greatest of all of Christ’s miracles and the definitive proof that He is the True God and the True Messiah.… READ MORE

Nothing but chaos since…

It was Monday, February 11, 2013, when Italian journalist Giovanna Chirri became the first person to inform the world of “Pope” Benedict XVI‘s resignation, effective February 28. As the Vatican correspondent for the Italian news outlet ANSA, Chirri was seated among other members of the press to cover on-site the consistory Benedict had convoked and at which he made known his totally unexpected decision to renounce the office of the papacy which he had (falsely) been claiming since April 19, 2005:

A lawyer and a journalist walk into a bar…

More Catholic than the Pope?
The Remnant versus Francis

What, even MORE Catholic??

Granted, we are a bit late in covering this, but this should not detract from its importance, which is not at all tied to the time it was first published.

On March 30, 2014, the Semi-Traditionalist biweekly publication The Remnant released another video of a chit-chat between its editor, Minneapolis-based Michael J. Matt, and Virginia-based contributor Christopher A. Ferrara. In this episode of the so-called “Remnant Forum”, the two discuss the latest (at the time) theological chaos in the institution they still believe to be the Immaculate Bride of Christ.… READ MORE

No Space Between Ratzinger and Bergoglio: So Close in Apostasy, So Far from Catholic Truth

by Thomas A. Droleskey, Ph.D.

Although there has been quite a concerted effort on the part of some who consider themselves conservative or traditional Catholics, to contrast the supposedly “traditional Pope” Benedict XVI with his supposedly more “radical” successor, “Pope” Francis, both of these men are Modernists who defect from the Catholic Faith on numerous points. Whatever differences exist between Joseph Ratzinger and Jorge Bergoglio, they center mostly, although not exclusively, on matters of style and emphasis. No Space Between Ratzinger and Bergoglio is an effort to explain that there is no theological “space” between two men whose manifest public heresy has been laid out to see throughout the entirety of their careers.… READ MORE More Interviews:
3 with Francis, 1 with Benedict

The barrage of words from the Vatican will not let up: In the past few days, a total of four major interviews hit the news, three that were conducted with the “Pope”, Francis, and one with the “Pope Emeritus”, Benedict XVI. Let’s take a look at the actual texts and some highlights, in chronological order:

Interview with Francis by Henrique Cymerman for Israeli Media (Nov. 28):

Approximately four weeks after the close of part one of the infamous Synod on the Family, the retired “Pope” Benedict XVI now adds some fuel to the inferno. Though he once promised to withdraw completely from ecclesiastical affairs, he somehow always manages to make himself heard whenever he so chooses, even if usually in an indirect or even cryptic way.

This time, Joseph Ratzinger has chosen to weigh in on the debate over whether public adulterers (the “divorced-and-remarried”) should be allowed to receive the Novus Ordo sacraments, which is one of the core issues currently under discussion in the Novus Ordo Sect’s ongoing synod of bishops, part two of which is scheduled to take place in October 2015. Giovanni Battista Montini (“Pope” Paul VI) was the single one figure in Church history most responsible for creating/shaping the apostate Vatican II Sect in Rome. Vatican II was his council (he’s the only “Pope” who signed its documents). The Novus Ordo Missae was his “Mass.” The New Sacraments were his rites, most notably the new ordinations, which are invalid and confer no grace and make no priests or bishops (see details here).… READ MORE

So, apparently this is the much-anticipated CIC press conference with that 'Declaration of Filial Resistance' - https://remnantnewspaper.com/web/index.php/articles/item/6175-press-conference-issues-declaration-of-filial-resistance-to-globalist-agenda-of-pope-francis Three laymen, virtually unknown in most of Novus Ordo Land, say why Francis is bad and they won't follow him. But he's the Pope, of course.

American Novus Ordo bishops are going to get a new president. Who will it be?

The divine promises have been given to the Papacy alone. 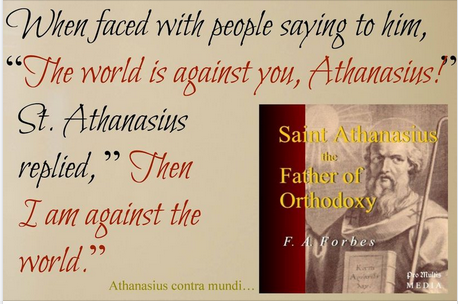 During a time when heresy and betrayal run riot in the Church we need more like St Athanasius.