A Third Council of Nicea in 2025?
Do Francis & Bartholomew want a new Ecumenical Council?

Rumors are making the rounds in the blogosphere today as AsiaNews.it released a story according to which the Eastern Schismatic (“Orthodox”) Patriarch Bartholomew I revealed that “Pope” Francis and he “agreed to leave as a legacy to ourselves and our successors a gathering in Nicaea in 2025, to celebrate together, after 17 centuries, the first truly ecumenical synod, where the Creed was first promulgated.”

The full story can be read here:

How low can she go?…

Another Wednesday, another scandalous performance by the would-be pop star “Suor Cristina”, the Sicilian Novus Ordo sister who has been making a mockery of the religious life on the Italian television program The Voice of Italy. In her semi-final performance on May 28, 2014, Cristina Scuccia reached a new low by singing and dancing the 1987 hit (I’ve Had) The Time of My Life by Bill Medley and Jennifer Warnes.… READ MORE

[The following is for all those who are not yet completely brain-dead and willing to at least entertain the idea that maybe, just maybe, a man who refuses to adhere to Catholic teaching, constantly professes heresy, commits public acts of apostasy, scoffs at Catholic Tradition, and loves to make friends with the enemies of Christ, might not in fact be a valid Pope of the Catholic Church. … READ MORE In keeping with his program of refusing to ever actually evangelize the Jews (or any other non-Catholics, for that matter), and of mocking Christ our Lord, the false “Pope” Francis wore his pectoral cross behind his sash, so that it was at various times either covered partially or not visible at all.… READ MORE

To Francis, it’s all the same god anyway…

Francis, the Muslims & the Jews

The Call Me Jorge blog has just put up another really interesting post on Francis’ Modernist apostasy. In the video below, you see Jorge Bergoglio speaking to representatives of the Muslim and Jewish religions, in addition to his own, telling them they all believe in and adore the same god:

The majority of us know how to coexist, it’s easier for us, and that’s a clear message. It’s a message that we have the same Father, up in Heaven, and the same Father down on earth, we adore him… What you have done, visiting these towns, the synagogues, mosques and Christian churches, is an act of brotherhood and a seed.

After a brief hiatus, it’s baack!…

To listen to the recorded broadcast, click the title above

Restoration Radio returns with another episode of the “Francis Watch” series, a monthly show dedicated exclusively to all things Bergoglio. Tune in live each month or listen on demand at your convenience for a truly Catholic perspective on Jorge Mario Bergoglio, the Anti-Catholic Modernist who falsely claims to be the Pope of the Catholic Church.

Well, we told you so, didn’t we? But at first we were being denounced as having no sense, no compassion, no love, no true Christian spirit because of our severe criticism of this possibly possessed woman known as Suor Cristina of Sicily. When she first started dancing and singing various pop tunes, despite supposedly being a Catholic nun, you knew it wouldn’t stay there. After Girls Just Want to Have Fun, Flashdance… What a Feeling and Can’t Get You out of My Head, Cristina is now rocking Bon Jovi’s 1986 hit Livin’ on a Prayer.… READ MORE

The “Spirit of Assisi” at work… A Buddhist Rite in the Sanctuary of Santiago Cathedral

“The Spirit of Japan” — such is the name of the event which desecrated the Catholic cathedral of Santiago de Compostela, Spain, on May 13, 2014, the day of the 97th anniversary of the first appearance of Our Lady of Fatima in Portugal. Priests and monks of the pagan religions of Shintoism and Buddhism performed various rituals immediately in front of the Novus Ordo table, and a more remotely before the Catholic high altar. … READ MORE 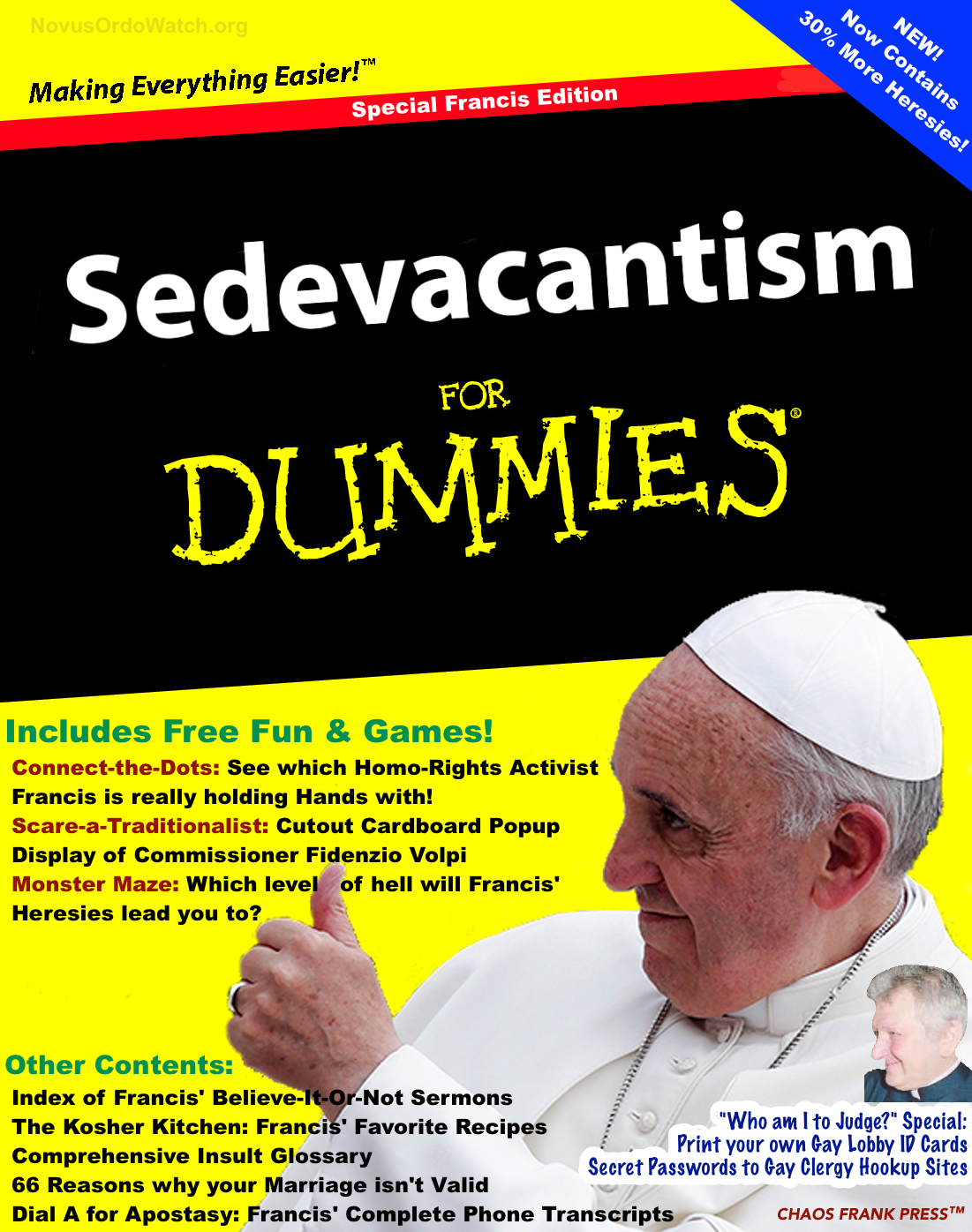 We had said before that “Pope” Francis is a walking copy of Sedevacantism for Dummies, so we decided to create this spoofed cover. For all of those who are terribly offended at this, please keep in mind the nature and purpose of satire: to draw attention to something that is wrong or evil by the use of humor, irony, or exaggeration.

In this case, there is not too much exaggeration actually. In fact — and this is what makes this spoofed cover so funny — every single item mentioned is grounded in fact, in something that has actually happened.… READ MORE

Can’t lose what you never had…

Bergoglio Has Nothing to Lose
…Like the Papacy, for Example

That skullcap was never his anyway!

SINCE JORGE MARIO BERGOGLIO’S election in March 2013, I’ve heard from more and more traditional Catholics who are starting to wonder whether sedevacantism might now be the only coherent way to explain the state of affairs in the post-Vatican II church. As I noted in a post late last year:

“After all, how can you reconcile the countless outrageous public statements that Bergoglio has made (no Catholic God, who am I to judge, doctrinal security is not possible, proselytism is nonsense, etc.)