Watch Video of Announcement, First Appearance on the Balcony, Here:

The Vatican’s “Guardian of Orthodoxy” is a Heretic himself…

Don’t you hate it when that happens? You’re appointed the “guardian of orthodoxy” in the Vatican, and then people discover you’re a heretic yourself. This has happened to “Archbishop” Gerhard Ludwig Muller, appointed to the post by “Pope” Benedict XVI in 2012.

Aside from other denials of dogma, such as Transubstantiation and the Bodily Resurrection, Muller also denies the dogma of the Perpetual Virginity of the Blessed Virgin Mary. The semi-traditionalist Tradition in Action has the details:

By contrast, the Catholic Church teaches the following dogmatically and infallibly:

If anyone does not properly and truly confess in accord with the holy Fathers, that the holy Mother of God and ever Virgin and immaculate Mary in the earliest of the ages conceived of the Holy Spirit without seed, namely, God the Word Himself specifically and truly, who was born of God the Father before all ages, and that she incorruptibly bore [Him], her virginity remaining indestructible even after His birth, let him be condemned.

Francis spews Naturalist platitudes. God’s grace is necessary for good to triumph over evil. We need God’s supernatural assistance - left to ourselves, evil will prevail.

Fraternity is more durable than fratricide, hope is more powerful than hatred, peace more powerful than war. This conviction can never be silenced by the blood spilled by those who pervert the name of God to pursue paths of destruction. #ApostolicJourney #Iraq

@CristianoEncend Agreed - disagreement is not fear. But a lot of people do not disagree rationally with Sedevacantism, they are terrified of it and are willing to embrace the craziest alternatives before ever looking at Sedevacantism. I can show you examples.

His narrative is that all religion, by definition, is peaceful. If it’s not peaceful, then it’s not “authentic” religion. Where did he get this definition? He simply made it up.

God can bring peace to this land. We trust in him and, together with all people of good will, we say “no” to terrorism and the manipulation of religion. #ApostolicJourney #Iraq 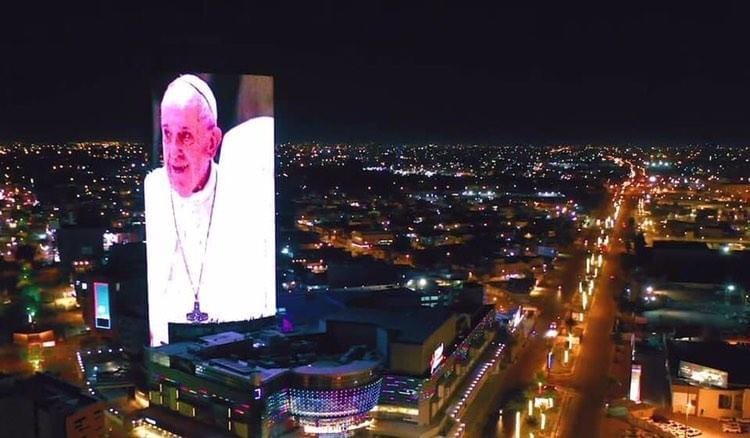 Stunning view of Baghdad: An image of Pope Francis is displayed on the giant screen of the Baghdad Mall, the newest and most modern shopping center in the country. The face of the Pontiff occupies the 33 floors of this building. #PopeinIraq #PopeFrancisinIraq

Here is the full text of Pope Francis’ prayer for the victims of war in Mosul. #PopeinIraq #PopeFrancisinIraq

Here is the full text of Pope Francis' Angelus address in the Nineveh Plains. #PopeinIraq #PopeFrancisinIraq

In Iraq, Pope condemns ‘murder, exile, terrorism, and oppression’ in name of religion...

Pope Francis enjoins Christians to rebuild their communities based on forgiveness and fraternity, during a meeting at the Church of Immaculate Conception in Qaraqosh. #PopeInIraq