The following are clips of some newspaper title pages of Jan. 22, 1922: 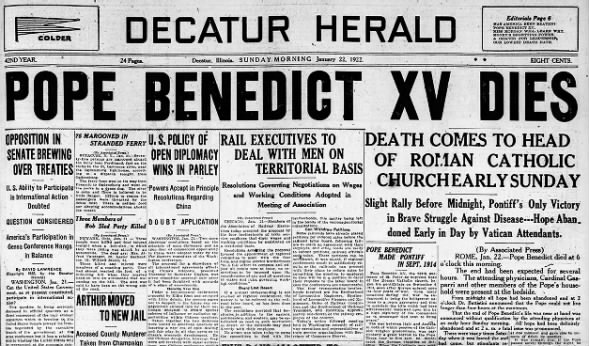 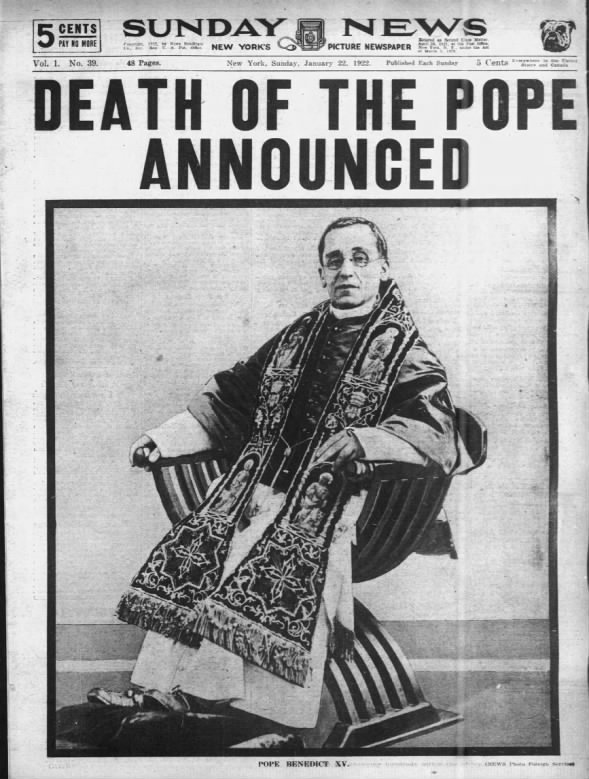 Pope Benedict XV was born and baptized Giachomo Giambattista della Chiesa on Nov. 21, 1854. Due to his small size and frail appearance after a very difficult birth, he was baptized the very same day.

After appointing him Archbishop of Bologna on Dec. 16, 1907, Pope St. Pius X (r. 1903-1914) personally consecrated him a bishop in the Sistine Chapel in the Vatican on Dec. 22. The same Pope Pius conferred the cardinalate upon Archbishop della Chiesa on May 25, 1914, over the objections of his Secretary of State, Cardinal Raphael Merry del Val. The new Cardinal della Chiesa was elected Pope only about 14 weeks later, just after the outbreak of the “Great War”, which would later become known as World War I (1914-1918). When asked what his papal name would be, the new Pope replied: “Benedictus Decimus Quintus” — “Benedict the Fifteenth”. The reason he reportedly gave for choosing the name Benedict was that the last archbishop of Bologna to be elected Pope had been Benedict XIV (r. 1740-1758). Pope Benedict XV was a man of small stature and allegedly said of himself that he looked like a gargoyle. He was a man of great piety and charity. He spent much of his papal reign trying to mediate peace and dealing with the consequences of the Great War. Among the more notable events of his pontificate we may number the following: It is true that under Pope Benedict’s reign, the severity of the Church’s anti-Modernist campaign that had been begun under St. Pius X was scaled back. However, it would not be right to conclude from this that Pope Benedict was secretly a Modernist or that he had sympathies for what Pope Pius had justly condemned as the “synthesis of all heresies” (Encyclical Pascendi, n. 39).

In fact, in his first encyclical letter, issued only a few weeks after St. Pius X’s passing, the new Pope declared firmly:

…[T]he Church demands from those who have devoted themselves to furthering her interests, something very different from the dwelling upon profitless questions; she demands that they should devote the whole of their energy to preserve the faith intact and unsullied by any breath of error, and follow most closely him whom Christ has appointed to be the guardian and interpreter of the truth.

There are to be found today, and in no small numbers, men, of whom the Apostle says that: “having itching ears, they will not endure sound doctrine: but according to their own desires they will heap up to themselves teachers, and will indeed turn away their hearing from the truth, but will be turned unto fables” (II Tim. iv. 34). Infatuated and carried away by a lofty idea of the human intellect, by which God’s good gift has certainly made incredible progress in the study of nature, confident in their own judgment, and contemptuous of the authority of the Church, they have reached such a degree of rashness as not to hesitate to measure by the standard of their own mind even the hidden things of God and all that God has revealed to men.

Hence arose the monstrous errors of “Modernism,” which Our Predecessor rightly declared to be “the synthesis of all heresies,” and solemnly condemned. We hereby renew that condemnation in all its fulness, Venerable Brethren, and as the plague is not yet entirely stamped out, but lurks here and there in hidden places, We exhort all to be carefully on their guard against any contagion of the evil, to which we may apply the words Job used in other circumstances: “It is a fire that devoureth even to destruction, and rooteth up all things that spring” (Job xxxi. 12).

Nor do We merely desire that Catholics should shrink from the errors of Modernism, but also from the tendencies or what is called the spirit of Modernism. Those who are infected by that spirit develop a keen dislike for all that savours of antiquity and become eager searchers after novelties in everything: in the way in which they carry out religious functions, in the ruling of Catholic institutions, and even in private exercises of piety. Therefore it is Our will that the law of our forefathers should still be held sacred: “Let there be no innovation; keep to what has been handed down.” In matters of faith that must be inviolably adhered to as the law; it may however also serve as a guide even in matters subject to change, but even in such cases the rule would hold: “Old things, but in a new way.”

Clearly, the new Pope was no less opposed to Modernism in principle than his sainted predecessor. Where the two men differed was in their assessment of the magnitude of the threat it posed and, consequently, in the practical approach to be taken against Modernism.

Whereas St. Pius X had instituted various measures to help ensure that Modernism would not merely be condemned in words but actually stamped out and prevented from ever returning — for example, by instituting diocesan vigilance committees (see Pascendi, n. 55) — Pope Benedict thought such a heavy-handed approach would ultimately do more harm than good.

With decades of hindsight we now know, of course, that Pius X’s course of action was absolutely justified and necessary, and that Benedict XV’s less stringent attitude was imprudent — but back then that was far from obvious. Pope Benedict XV being carried on the Sedia Gestatoria

There is available on YouTube a brief but precious collection of video clips of Pope Benedict. The video cannot be embedded here but it is available to view at this link. If the playback speed is slowed to 0.5 in the settings, it will look more natural.

A great biography of Giacomo della Chiesa is that written by Walter H. Peters (imprimatur 1959):

Let us never forget to pray for all deceased Popes, and today especially for Pope Benedict XV. Eternal rest grant unto him, O Lord, and may perpetual light shine upon him. May he rest in peace. Amen. By the way, do you remember the address Antipope Francis gave on the occasion of the 100th anniversary of the holy death of Pope Saint Pius X in 2014? No?

Don’t worry — no one else does either.