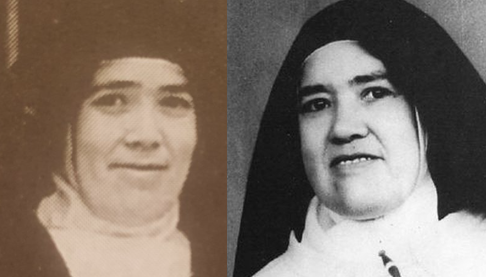 Yesterday, Mar. 25, the web site Sister Lucy Truth was launched. It publishes all the scientific evidence collected so far. The site can be accessed here:

The evidence presented there includes:

It’s important to understand that the Sister Lucy Truth project — a non-profit organization started by Dr. Peter Chojnowski — is credible. The published evidence comes from professional and accredited experts in their respective fields that stand behind their analyses and judgments with their names and, in some cases, with sworn declarations.

The significance of this can’t be overestimated. We are talking about scientific proof, the kind that can be used in a court of law to prove or disprove someone’s alleged identity. In other words, this cannot be dismissed as some kind of “conspiracy theory” — it is now conspiracy fact, at least as factual as empirical science can be.

On the Sister Lucy Truth site, the following indictment is posted:

We at Sister Lucy Truth publicly declare that based on the evidence presented here, we have found it to be morally and scientifically certain that the woman portrayed to the world as “Sister Lucy,” from her first public appearance on May 13, 1967 to her death on February 13, 2005, was not the same person as Sister Lucy, Seer of Fatima and Visionary who predicted the Miracle of the Sun on October 13, 1917.

This, one of the greatest frauds in the history of the Church, was discovered through the use of the most sophisticated facial recognition programs available, along with the accumulated testimony of plastic surgeons, orthodontists, forensic artists, private investigators, handwriting analysts, and facial recognition experts. Due to the availability of hundreds of photos of “Sister Lucy” available on the internet and in authoritative biographies, this case of substitution, fraud, and stolen identity has been able to be uncovered and analyzed. Without the judgment of the best and most relevant professionals available, we would not be making this grave accusation and presenting this charge. We will continue to accumulate and post on this site new studies and research concerning this investigation as they are produced and published. All of the names of the relevant experts shall be published along with their professional findings. The truth of the disappearance of the true Sister Lucy and the identity of the imposter who took her place shall be placed before an internationally based private investigator who will investigate and solve the case.

The fraud has been identified and named. We charge the highest officials in the Vatican with conspiracy to perpetuate and conceal the substitution of Sister Lucy dos Santos of Fatima with an as yet unknown Imposter.

That there should have been an impostor Sister Lucy is not difficult to fathom if we look at what the Modernists and Masons have accomplished since the death of Pope Pius XII. It is most likely that the true Third Secret of Fatima (perhaps this text?) Our Lady revealed to the children in 1917 announces in some fashion the impending subversion of the Church, the calling of a false ecumenical council, the destruction of the Catholic Mass, and with it all the emergence of the strange new church we call the Novus Ordo Sect. For this reason alone, it would have been of the greatest importance for the anti-Catholic revolutionaries in the Catholic hierarchy to find a way to “deal with” Sr. Lucy of Fatima.

But the most important thing for now is to spread far and wide the scientific fact that “Sister Lucy” is not Sister Lucy. Whatever else may have happened or be the case, the woman who was presented to the world as the true Fatima seer after 1958 is not in fact the same person to whom Our Lady appeared.

The ramifictions of this for the Vatican and the various Fatima apostolates are very significant: for the Vatican, because they are ultimately responsible, and substituting an impostor for the real Sr. Lucy doesn’t happen by accident but is done deliberately. Why the deception? What happened to the real Sr. Lucy, and what is the true identity of the woman who played her role? It is also disastrous for the various Fatima apostolates because so much of their material relies on words and actions of the imposter, who endorsed the Novus Ordo religion and its false popes.

Thus it probably comes as no real surprise that the semi-traditionalists operating the late Rev. Nicholas Gruner’s Fatima Center have shown no interest in discovering the truth about this whatsoever. Clearly, an impostor Sister Lucy is not helpful to their work, as they have relied heavily on the fake seer being the real one. Most notably, the convenient “diabolical disorientation” mantra they used to explain or excuse any theological or spiritual aberration in the Novus Ordo Sect without having to draw the undesirable sedevacantist conclusion, has just gone up in smoke for them, as the origin of that phrase and concept is found in the warnings of the post-1958 impostor Lucy, not the real one.

The Sister Lucy Truth project shows what one person can accomplish in the fight against the false Vatican II Church if only he makes a genuine effort: With prayer for divine assistance, generous alms from other interested parties, a small internet presence, and a lot of courage and persistence, one man, Peter Chojnowski, simply went ahead and collected as many facts as he could and then hired the right firms that can determine with scientific accuracy whether the Sr. Lucy impostor hypothesis is true or false. Now we know it is true, and, armed with credible evidence, the Vatican can now be confronted before all the world.

We encourage all people who have various means and talents to stop wasting time simply browsing web sites or participating in comboxes. Get out and do something effective! There are so many things that could be done and need to be done.

For example: Some Novus Ordo magazines, such as Inside the Vatican, publish letters to the editor with the full names and email addresses of the senders. As many of their readers are quite concerned about what has been happening under Francis, one can simply start emailing these people with information and links about the true state of the Church. Why not subscribe to a magazine like that and begin emailing those people with information taken from, or pointing to, (for example) this web site, True Restoration, or Bp. Sanborn’s blog?

Alternatively: Why not put ads in a local paper to advertise the truth about what has happened to Holy Mother Church to help confused souls? A simple ad that reads: “What has happened to the Catholic Church? Are you wondering why they changed your religion? Get free info packet by calling or writing to ….” could do so much good! Or how about distributing flyers to Novus Ordos as they leave church on Sundays? (Make sure you do not trespass, of course, and observe all local laws and regulations.) Or, if you speak a foreign language, how about starting your own blog and translating some of our articles (permission hereby granted) and putting them up in that other language? (Don’t know how to create a blog? Look it up on YouTube!)

So much can be done if people just start exploring options a bit and quit wasting time doing ineffective things. Look at Dr. Chojnowski. Instead of just speculating about whether or not the post-1958 Sister Lucy is the real Lucy of Fatima and debating it with others in some online forum, he did what he could to find out for sure and prove it, and now the Vatican can be confronted with the embarrassing evidence.

Together, with God’s help, we can accomplish so much. May Our Lady of Fatima intercede for us!

Image source: composite with elements from sisterlucyimposter.org
License: fair use