Grotesque: “Traditional Latin Mass” offered by Fraternity of St. Peter presbyter at Modernist Church of the Atonement at their seminary in Wigratzbad, Germany

Would Francis help a marginalized member of his own religion who is persecuted by the mob in Pakistan and threatened with being lynched? OF COURSE NOT! As Bilderberg-visiting “Cardinal” Pietro Parolin made unmistakably clear: “It’s an internal question that regards Pakistan…” If only Asia Bibi was a Muslim migrant…

Can you guess what the focus of this year’s Vatican Christmas concert was?

In Brisbane, Australia, SSPX youth are indoctrinated into the Novus Ordo religion with “Bishop” Robert Barron. (That’s the guy who just told Jewish journalist Ben Shapiro that Jesus Christ is only the “privileged” way to salvation, and his conversion is optional.)

Press coverage the way he likes it: “Pope” Francis rewards Vaticanist Andrea Tornielli with position of director of the editorial board of Vatican Media. That’s the official media arm of the Unholy See that recently profiled a pro-abortion “nun” praising the U.S. midterm election results.

Speaking of Tornielli: Did THIS comment perhaps get him his new job? Or was it the new anti-Vigano book he co-authored? Or both?

Novus Ordo bishops of India celebrate false Pagan lights: “…the lights of Diwali mark the immense reality that light will finally triumph over darkness, love will overcome hatred and righteousness will banish evil.” Reality Check: “I am the light of the world: he that followeth me, walketh not in darkness, but shall have the light of life” (Jn 8:12).

Meetings, Inc.: Former insider estimates that each USCCB meeting costs at least $650,000 – and explains why.

In his new book, The Secret of Benedict XVI, Antonio Socci treats the old Modernist Ratzinger as though he were the orthodox antidote to Francis.

Care to take a look at “Pope” Francis’ Library of Judaica?

Ah well, one more scandal: A diocese in Austria has defied the Vatican’s order not to publish a report implicating its former “bishop” in a financial and moral scandal.

That’s it: We need more emotion in the liturgy! Barry Manilow, call your office!

Regarding that devotion to the Novus Ordo Chair of Judas: Professional recognize-and-resist apologist Prof. Roberto de Mattei responds to criticism of Prof. Douglas Farrow. (We invite de Mattei to respond also to our critique of his lecture but suspect he won’t.)

How could he say no? Delegation of World Congress of Mountain Jews received by Francis to discuss creation of a “World Council of Mono-Religions”.

“Even the Church is invaded by ideological colonization”, says the Vatican II Sect’s Chief Ideologist.

Got to make room for the Chicoms: Francis orders two of his loyal Chinese underground “bishops” to step down so the Communists can take over. With this betrayal, Francis takes backstabbing to a whole new level.

Another rigged synod: A chronicle of what went down at the Vatican’s Youth Synod in October.

Francis has figured it out: The chief threats to this world are “climate change” and nuclear war!

Flashback 2016: Francis says he often doubts his faith and even rebukes our Blessed Lord!

Have you ever wondered why the Modernists never hand over their ugly space-ship churches to profane use and instead only the traditional and beautiful ones?

Journalist Ed Pentin explains that the Vatican’s policy of silence has consequences.

Well, that settles it: Rorate Caeli reminds its readership that “Sedevacantism is an untenable position” and that “Pope Bergoglio is indeed Pope”. Case closed.

Sacrilegious Virgin Mary statue “is a sign of welcome on the U.S.-Mexico border”. Looks more like a scarecrow meant to keep people from entering.

After a guilty verdict down under, questions are being raised about the “Cardinal” George Pell trial. You have to admit: The accusations against Pell and that initial guilty verdict are coming in extremely handy for “Pope” Francis.

Nothing sacred: Francis is not ashamed to apply his Marxian egalitarianism to the Blessed Virgin Mary.

John Zmirak ponders what would happen if the Vatican followed its own immigration rhetoric. (You know, like that.)

From ridiculous to absurd: Just when you thought you’d seen it all, some Novus Ordo bishop comes along and presents another corny pastoral staff.

Novus Ordo canon lawyer sympathetic to the cause of the semi-trads, Count Neri Capponi, has died.

And now: Another World Youth Day song nobody needs.

Bogus Aussie bishop proclaims: “The model of the Church based on clerical hegemony has run its course.” He could lead the way by stepping down.

Good news: The Novus Ordo priests of the future will come pre-indoctrinated in the climate religion!

Nothing like making your own religion look ridiculous to get people back to church: Diocese of Essen, Germany, releases mock in-flight security advisory with stewardess in mini skirt to offer instructions for Christmass liturgy.

Carl Olson sums it up: “The Pope fiddles, the bishops fumble, and the laity fume.”

A fun game to play with the family during Christmas break: Who said what? Pre- and Post-Vatican II Quotes.

A New York Novus Ordo priest has denounced the Vatican under Francis as a “theological Chernobyl”. (We also addressed this in our most recent podcast episode, TRADCAST EXPRESS 074.)

The Novus Ordo liturgy is always a danger to souls but sometimes even to physical health.

Do you know what the most disregarded virtue is?

Blasphemy and sacrilege, but what else is new? Novus Ordo oratory defends its hipsterish “Millennial Nativity” scene.

Poor Lefebvrists! They’re still desperate to claim that they’re “not schismatic” when they meet the definition of schism to a T and once rejoiced at being “not in communion with a counterfeit church”. How times change!

Students at the Pontifical Lateran University can now sign up for the new “Sciences of Peace” course!

A self-confessed “progressive secular humanist” has a conniption fit over Bp. Donald Sanborn’s common-sense observation that people are more likely to commit crime if they are enticed to do so. Make sure you check out the combox there — Novus Ordo Watch and other sedevacantists contributed to some lively discussion!

Birds of a feather flock together: U.S. Novus Ordo bishops invite other non-Catholics to address them.

Novus Ordo bishop in Oregon: “Satan wants to destroy the Eucharist, and he can do that by trying to destroy the priesthood, and the bishops as well.” No Satan needed for that, “Saint” Paul VI took care of it back in 1968 and ’69!

His isn’t the only one: So many empty chairs at Francis’ daily “Mass” at the Casa Santa Marta…

“Cardinal” Christoph Schonborn makes it possible: Vienna Cathedral features Lesbian “art”. (Caution! Link shows two immodestly-dressed women kissing.) The “Catholic” hierarchy in Austria is known for its acceptance and promotion of sins that cry to Heaven for vengeance — and, of course, for the habitual desecration of Vienna’s St. Stephen’s Cathedral, which was turned into a disco on Oct. 5, 2018.

Hellboy points out the obvious: Francis has deliberately appointed pervert-friendly “bishops” and “cardinals”.

Heaven help us: Detroit wants to “unleash the Gospel”!

“Pope” Francis, absolute expert on everything (that isn’t Catholicism), has plenty to say to the World Social Forum of Migration.

How things work in the Vatican II Sect: Who needs a Pope and his doctrinal pronouncements when you have a Dr. Peter Kwasniewski who makes himself the final authority instead? He asks, “What good is the New Catechism?” He should have reasoned a bit further and asked: “What good is the Papacy if someone like Francis can be a valid Pope?” Or: “What good is a supposedly indefectible church if in the end it’s just another institution proclaiming theological junk that needs to be filtered and corrected by self-appointed commentators?”

Novus Ordo philosopher Robert Spaemann has died at the age of 91.

He really doesn’t care from which source you imbibe Vatican II Modernism: Francis urges continued study of the writings of Benedict XVI.

If only he had stuck to chemistry! Tradition in Action takes a good look at Bergoglio’s formation.

Louie Verrecchio on “Cardinal” Burke’s and “Bishop” Schneider’s de facto restrictions: “I’m not exactly livid over the idea that the Banquet Bishops will presumably headline a handful fewer conferences and be wined and dined just little less in the coming year.”

Former Vatican consultor “Mgr.” Nicola Bux describes the Francis Effect: “heresies, schisms, and controversies of various kinds.” What could possibly be causing such an effect? Pick one: (1) Vicar of Christ, guarantor of orthodoxy; (2) Modernist usurper of papal chair. (No, Chris Ferrara, you can’t pick both!)

Prepare to be shocked: The Novus Ordo Sect is drawing closer to Freemasonry.

Tom Droleskey notes that Francis is the enabler of every kind of -ism except Catholicism.

Peter Chojnowski announces that his Sister Lucy Truth project is expanding into the question of the authenticity of the text that was released as the “Third Secret of Fatima” by the Vatican in 2000.

A non-sedevacantist Italian author has (finally!) dismantled Joseph Ratzinger’s 1968 Introduction to Christianity. The book is available in Italian directly from the author.

From frog to prince in billions of years? Bishop Donald Sanborn slams the modern-day fair tale of Evolutionism.

And the next semi-trad self-help conference is scheduled for May 3-5, 2019, where all sorts of self-appointed experts explain why one can have no part in the religion of the man who is definitely and absolutely the Vicar of Christ on earth. 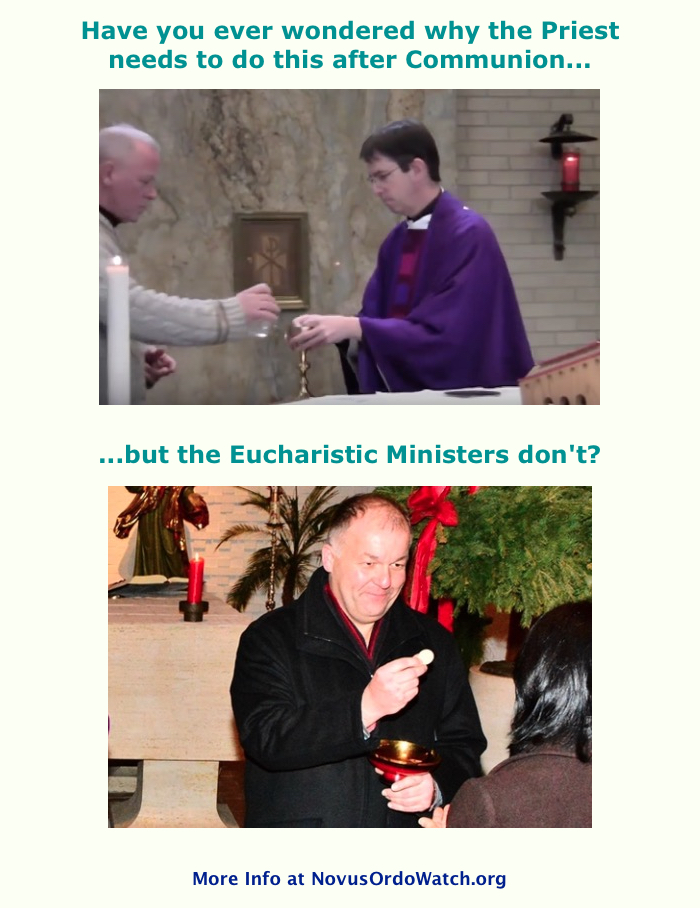