Athanasius Schneider on French TV:
“A certain kind of Schism already exists in the Church” 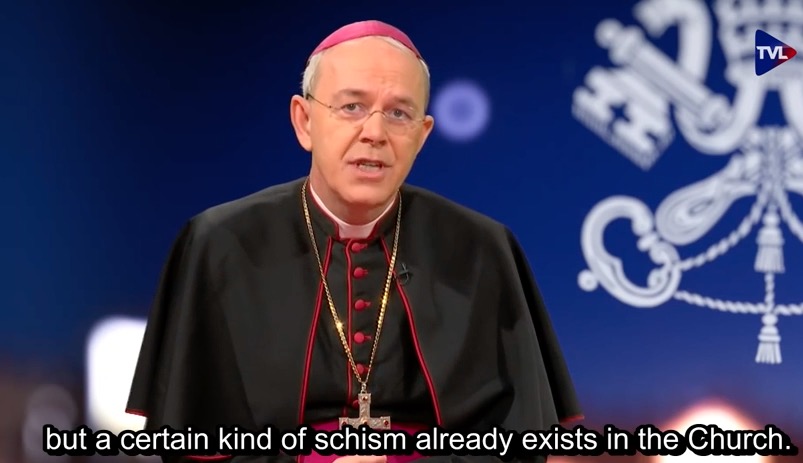 On Sunday, Dec. 4, 2016, the internet-based French television station TV Libertés aired an installment of its program Terres de Mission. One of its guests was Athanasius Schneider, auxiliary “bishop” of Maria Santissima in Astana, Kazakhstan, who was interviewed about the fallout from the dubia submitted to “Pope” Francis to receive clarification on certain points contained in the “Apostolic” exhortation Amoris Laetitia. The entire program can be watched in the original French here.

We have taken the portion of the broadcast that contains the interview with Mr. Schneider and added English subtitles to it. You can watch it here:

Schneider is the darling of the semi-traditionalists in the New Church because he says many things that are traditional, right, and true. Although we do not question Mr. Schneider’s personal good will or his sincerity, we nevertheless consider him a particularly dangerous individual precisely because he gives the impression that one can be a real Roman Catholic inside the Novus Ordo Sect. We must always keep before us that what matters is not the personal intentions of the adherents of the false Modernist church but the danger they objectively present. As the great Fr. Frederick Faber once said: “It is the good men, good once, we must hope good still, who are to do the work of Anti-Christ and so sadly to crucify the Lord afresh…. Bear in mind this feature of the last days, that this deceitfulness arises from good men being on the wrong side” (source).

In the interview above, “Bp.” Schneider starts out by asserting that Amoris Laetitia has no real magisterial weight but was essentially issued as merely a helpful guide to serve as a basis for “doctrinal, moral, and pastoral discussions”. This is a thesis that even the indult blog Rorate Caeli warned against a while back:

However, whether or not the document qualifies as properly “magisterial” by Novus Ordo standards isn’t even the main point. Since the document contains not just egregious errors but even frightful heresies, this raises the discussion to an entirely different level, because in this way Francis is — once again! — telling the world that he does not hold the Catholic Faith.

Schneider continues by pointing out, quite rightly, that there are forces within the Vatican II Church who want a “Gospel of Divorce”, a “Gospel without the Sixth Commandment”, embellished with cosmetical terms like “mercy” and “accompaniment”. Unfortunately, he seems to forget that the main force behind precisely this is the man he acknowledges to be the Vicar of Christ, none other than Jorge Mario Bergoglio, “Pope Francis”.

True, Schneider does criticise Francis as well but he does not allow the truth of his premises to produce their logical conclusion. Instead, he then creates his very own ideas about the concept of schism and declares that a “certain kind of schism already exists in the Church”, one that is “bizarre” and “internal” because this schism, so he claims, consists of formal union with the Pope, the visible head of the Church, but separation from Christ, the invisible Head of the Church!

Yes, according to this novel Schneiderian concept of schism, one can be in union with the Pope (and the members of the Church who are subject to the Pope) but still in schism! Such a position obliterates the entire concept of schism and is probably heretical, or, if not, very close to heresy. Schneider’s stance seems to imply either that the Church can defect from the Gospel of Christ, or else that the Church is not one in Faith and government (since he claims it is “internal” to the Church, he is saying the Church is divided).

Schneider thus denies either the indefectibility of the Church or the unity of the Church. Besides, considering that Francis is the main agitator in this entire Amoris Laetitia schism business, Schneider is basically arguing that the Pope is in schism with the very God whose Vicar he is.

There is not enough time to flesh all this out now, and perhaps that will happen in a future post, but as a quick reminder, how does Mr. Schneider think he can square his crazy “internal schism” idea where one can be in union with the Pope but in schism with Christ, with the following papal magisterial (!) teaching?

In [the Pope’s] capacity as head, do not all his members owe him the solemn promise of canonical obedience, which alone can maintain unity in the Church and avoid schisms in this mystical body founded by Christ our Lord?

But you, dearly beloved Sons, remember that in all that concerns the faith, morals, and government of the Church, the words which Christ said of Himself: “he that gathereth not with me scattereth” [Mt 12:30], can be applied to the Roman Pontiff who holds the place of God on earth. Ground your whole wisdom therefore, in an absolute obedience and a joyous and constant adherence to this Chair of Peter. Thus, animated by the same spirit of faith, you will all be perfect in one manner of thinking and judging, you will strengthen this unity which we must oppose to the enemies of the Church….

This gift of truth and never-failing faith was therefore divinely conferred on Peter and his successors in this see so that they might discharge their exalted office for the salvation of all, and so that the whole flock of Christ might be kept away by them from the poisonous food of error and be nourished with the sustenance of heavenly doctrine. Thus the tendency to schism is removed and the whole church is preserved in unity, and, resting on its foundation, can stand firm against the gates of hell.

Union with the Roman See of Peter is … always the public criterion of a Catholic…. “You are not to be looked upon as holding the true Catholic faith if you do not teach that the faith of Rome is to be held”.

The Church established on Peter and his successors, and she alone, must be the Church of Christ, one in herself and destined to remain until the end of time by means of submission to a personal and visible Head.

We once again see that the adamant recognition of Francis as a true Pope and the obstinate refusal to admit the truth of Sedevacantism leads to the most dangerous errors and heresies regarding the Papacy and the Church. If this isn’t yet another conclusive piece of evidence that Francis cannot be a true Pope, what is?

The whole point of the Petrine primacy is that union with it is the guarantee of orthodoxy in the Church. That’s why Christ founded it and prayed that the Pope’s faith would never fail (cf. Lk 22:32; Denz. 1836). Schneider mentions Vatican I’s teaching that the Holy Ghost was not promised to St. Peter and his successors so that they would disclose new doctrine by His revelation (see Denz. 1836), but this fact is the result, not the condition, of the papal teaching authority. Vatican I here does not restrict the papal Magisterium a posteriori, as though each individual believer had to sift papal teaching for novelty and throw it out; rather, the council here declares that any new revelation is excluded a priori by divine institution. This is the beauty of the Papacy.

“Bishop” Schneider needs to be very careful. He continually promotes serious errors in his unattainable quest of accepting Francis as a true Pope while refusing his beliefs and teachings. This is not possible without doing grave damage to Catholic doctrine on the Papacy. One of the two needs to go: the Papacy or Francis.

Guess which one that is.

8 Responses to ““Bishop” Schneider on French TV: “Schism already exists in the Church””

The semi-trads would do well to consider that perhaps God’s Providence directed the Church’s Magisterium to spell out clearly the exalted status, power, and guarantees of the Papacy in the 19th & 20th centuries precisely so we would recognize the impostor popes when they arrived.