He found a way to top it…

Aside from the large Communist blasphemy of the Hammer-and-Sickle Crucifix, Francis also received a medallion of it (in the picture above, he can be seen wearing it around his neck). He has now dedicated it to the Virgin of Copacabana, Patroness of Bolivia.

If there is one man who knows how to bring the wrath of Almighty God upon himself, it is Jorge Bergoglio, the leader of the Modernist Vatican II Church, commonly known as “Pope Francis”.

During his “Apostolic Journey” in Bolivia, on July 9, 2015, Francis met with the nation’s Socialist president, Evo Morales, who gave him a blasphemous gift that depicted the Lord Jesus crucified on the Communist symbols of hammer and sickle. At first some news outlets reported, falsely, that Francis showed his displeasure and rebuked Morales, but further investigation into the footage of the ocurrence proved that Francis did no such thing. Instead, he listened carefully, nodded, and smiled as Morales explained to him that the hammer-and-sickle crucifix had been designed by the Jesuit “worker priest” Fr. Luis Espinal Camps (1932-1980).

In addition to the large woodcarving, Francis also received two medals from Morales, which he wore around his neck, one of them showing the same Communist crucifix of Fr. Espinal, the other showing an Andean condor. It turns out that the hammer-and-sickle-crucifix pendant is a medal just recently created by the Bolivian legislature, it’s so-called Orden al Mérito “Padre Luis Espinal” (Luis Espinal Award of Merit).

There is virtually no information out there about it in English yet, but we were able to dig up a few things in Spanish:

At this point, the whole Commie-Crucifix (“Commufix”) issue is definitely settled: Since the Bolivian government announced this ahead of time, Francis obviously knew this was coming, but it gets better still: The Vatican’s press spokesman, the Jesuit “Fr.” Federico Lombardi, released a statement on July 10 in which Francis expresses his sincere gratitude to Morales about the two decorations and dedicates them to the Blessed Virgin Mary, who is the Patron Saint of Bolivia under the title of Our Lady of Copacabana! The Vatican has published the full text of Francis’ comments, including his prayer to the holy Virgin in which he dedicates the two gifts to her:

At this point, no official translation into English has been released, but we are happy to provide an unofficial one:

Words of the Holy Father Francis on the Occasion of the Delivery of two Decorations to the Virgin of Copacabana, Patroness of Bolivia, Santa Cruz de la Sierra, July 10, 2015

The Holy Father, deeply grateful for the honors that the President of the Plurinational State of Bolivia bestowed upon him, and in recognition of the nobility and piety of the Bolivian people, has left these to the Virgin of Copacabana, so that when she looks upon them she will take care of this dear people with much maternal tenderness. During the Mass celebrated today he left both honors while reciting the following prayer.

Words of the Holy Father Francis

The President of the nation, in a warm gesture, has had the kindness of offering me two decorative honors on behalf of the Bolivian people. I thank the Bolivian people for their affection and the President for this courteous gesture and would like to leave these two decorations to the Patroness of Bolivia, to the Mother of this noble nation so that she will always remember her people and from Bolivia, from the shrine where I would like them to be, that she may remember the Successor of Peter and the whole Church and protect them.

Prayer of the Holy Father Francis

Mother of the Savior and our Mother, you, Queen of Bolivia, from the height of your shrine at Copacabana you attend to the supplications and the needs of your children, especially of the most poor and abandoned, and you protect them.

Receive as a gift from the heart of Bolivia and from my filial affection, the symbols of affection and the closeness that—in the name of the Bolivian people—Mr. President Evo Morales Ayma has bestowed on me with cordial and generous affection, on the occasion of this Apostolic Journey, which I entrusted to your solicitous intercession.

I pray that these honors, which I leave here in Bolivia at your feet, and which recall the nobility of the flight of the Condor in the skies of the Andes and the commemorated sacrifice of Father Luis Espinal, S.J., may be emblems of the perennial love and persevering gratitude of the Bolivian people for your solicitous and intense tenderness.

At this moment I place in your heart my prayers for all the petitions of your children, which I have received in these days: I beg you to hear them; give them your encouragement and your protection, and manifest to all Bolivia your tenderness as woman and Mother of God, who lives and reigns for ever and ever. Amen.

Francis’ prayer may sound devout and sincere, but here the prophet Isaias’ warning comes to mind, quoted by our Blessed Lord: “This people honoureth me with their lips: but their heart is far from me” (Mt 15:8; cf. Is 29:13). Far indeed, for what Francis here refers to as a great honor that “commemorate[s] the sacrifice of Father Luis Espinal” is a most disgusting insult to Jesus Christ our Lord, to His Sacred Passion and Death, and to His infinite Love. And now this insult has been extended also to the Blessed Mother herself. Now the “Pope” himself has associated her and her Divine Son with the cruel and murderous scourge of Socialism and Communism, two systems condemned by Popes Leo XIII and Pius XI (see, for example, Quod Apostolici Muneris [1878], Rerum Novarum [1892], and Divini Redemptoris [1937]) among others.

The web site Vatican Insider of the Italian La Stampa paper has published an English article on this frightening story:

Yet, this tremendous insult against our Blessed Lord and now also His Holy and Immaculate Mother, is not the first for Francis. Here are some prior offenses:

Nothing further needs to be said here. Francis is a blasphemer, an apostate, a heretic, a Communist, a Modernist, a Naturalist, you name it — he is everything except a Roman Catholic.

“Let no man deceive you with vain words. For because of these things cometh the anger of God upon the children of unbelief” (Eph 5:6). “Beware of false prophets, who come to you in the clothing of sheep, but inwardly they are ravening wolves. By their fruits you shall know them” (Mt 7:15-16).

Sounds exciting: New Session Of Courses Begins Study Of Vatican II Documents - https://thewandererpress.com/catholic/news/frontpage/what-do-they-really-say-new-session-of-courses-begins-study-of-vatican-ii-documents/ Because after 60 years, we need to find out “what they really say”… 🤦🏻‍♂️

If you’re interested in seeing the world saved, the garden you should be focusing on is Gethsemane…

The first "Laudato sí" garden in German-speaking Switzerland was opened in the Fahr monastery on 21 May, giving life to an idea conceived one of the novices.
http://ow.ly/pVTF30rUE9t

Calling @holysmoke intoxicated or possessed based on this video is gross. One can disagree without such slurs. One can only hope that Lewis doesn't know about Thompson's history of writing about his addiction b/c that would make this even worse.

@NovusOrdoWatch At this point I wouldn’t be surprised if they start mailing out hosts.

If you’re in Malaysia, you can register for your Novus Ordo “Drive Thru Communion” here: https://divinemercy.my/index.php/2-programme-events/424-drive-thru-holy-communion-registration Of course only if you’re “fully [email protected]”!! And don’t forget to bring your ticket! #CatholicTwitter #catholic

How much more of this drivel must we endure? 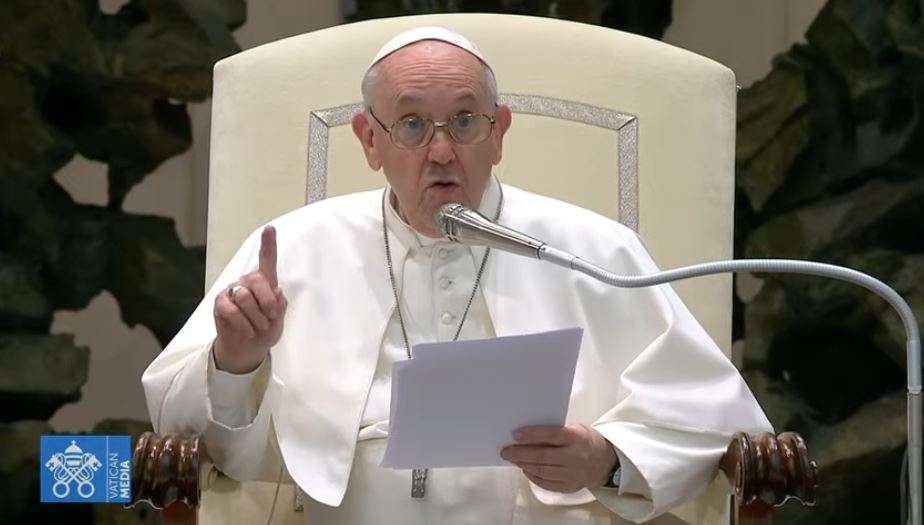 #PopeFrancis: To grow one must remember one's roots -- roots of faith, experience & culture. They must inspire strength & life, "not like museum exhibits, not ideologized and exploited out of interests of prestige and power, to consolidate a closed identity."