Yesterday, Oct. 19, the New York Post published a story on Anthony Raimondi, a 69-year-old former Colombo gangster who has confessed in a recently-published book that he helped to kill “Pope” John Paul I. Entitled “Meet the mobster who claims he helped whack Pope John Paul I over stock fraud”, the article provides incredible detail about an episode the Vatican has long been suspected of not being forthcoming about: the sudden and untimely death of “Pope” Albino Luciani on Sep. 28, 1978, which took place a mere 33 days after his election on Aug. 26. John Paul I had been chosen to replace the deceased “Pope” Paul VI (1963-78), Giovanni Battista Montini.

What makes the matter even more interesting is that Raimondi is the first cousin of the shady “Abp.” Paul Marcinkus (1922-2006), the long-time president of the Vatican Bank (1971-89). The American-born Marcinkus was a major player in the Vatican Bank Scandal of the early 1980s. At 6’4″ in height, he was known as the “Gorilla”. According to Piers Compton’s book The Broken Cross: The Hidden Hand in the Vatican (Australia: Veritas, 1984), Marcinkus had been initaited into Freemasonry on July 2, 1963, under the code name of “Marpa” (p. 89). He died in Sun City, Arizona, in 2006.

According to the article in the New York Post,

Raimondi’s job was to learn the pope’s habits and be on hand to observe as Marcinkus knocked out John Paul by spiking his nightly cup of tea with Valium.

“I stood in the hallway outside the pope’s quarters when the tea was served,” he writes, adding that the drug did its job so well that their victim wouldn’t have stirred “even if there had been an earthquake,” he recounts. “I’d done a lot of things in my time, but I didn’t want to be there in the room when they killed the pope. I knew that would buy me a one-way ticket to hell.”

Instead, he stood outside the room as his cousin readied a dose of cyanide, he claims. “He measured it in the dropper, put the dropper in the pope’s mouth and squeezed,” Raimondi writes. “When it was done, he closed the door behind him and walked away.”

After the snoozing pontiff was force-fed the poison, a papal assistant checked on him, then cried out that “the pope was dying” — after which Marcinkus and two other cardinals in on the plot “rushed into the bedroom like it was a big surprise,” Raimondi writes. A Vatican doctor was summoned, who ruled that John Paul I had suffered a fatal heart attack, he writes.

For copyright reasons, we cannot quote much more from the article, so we encourage our readers to click on the link to get further details.

So there we have it: “Pope” John Paul I was murdered by “Abp.” Paul Marcinkus, according to his cousin, Anthony Raimondi. As for the motive of the murder, the former mobster says that the victim had threatened to disclose a major stock scam committed by “half the cardinals and bishops in the Vatican” — fake stock certificates that were sold to unwitting buyers — and had announced his intent to defrock the clergy involved. Luciani’s successor, “Pope” John Paul II, kept his mouth shut, so he lived. 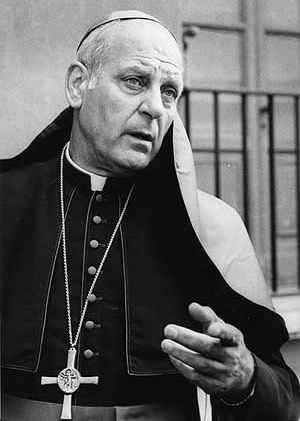 Did he murder John Paul I? “Gorilla” Paul Marcinkus

Raimondi’s tell-all book was released on July 22 of this year and can be purchased here:

The suspicious death of John Paul I had been the source of much speculation from the very beginning and the subject matter of several books, such as:

Please note that we are not endorsing any of the books mentioned here, we are simply informing our readers about their existence.

Less than two years ago, a book was published by Stefania Falasca, claiming to have clear confirmation that Luciani died of a heart attack and that no foul play was involved in his passing. The book, entitled Pope Luciani: Chronicle of a Death [Papa Luciani: Cronaca di una Morte], “is based on archival research and interviews”, according to reporter Cindy Wooden. The work has conveniently helped further John Paul I’s path to “beatification” — he is the only deceased papal claimant of the Vatican II Sect that has not yet been declared a “saint”, and that’s a hurdle that must be overcome.

Even if we allow that some of the details in Raimondi’s book are perhaps a bit embellished for the sake of a “better” story, it is highly unlikely that his testimony is all made up. “What I said in the book I stand by till the day I die. If they take [the pope’s body] and do any type of testing, they will still find traces of the poison in his system”, he affirms in the New York Post story.

Although the former mobster has now confessed his involvement in the murder of John Paul I, and indicated a way the Vatican could verify the truth of his claims, you can expect that the authorities there will not seek extradition or any kind of prosecution against the man, regardless of statutes of limitations. Nor will they bother to investigate whether he is telling the truth. After all, they have a vested interested in not drawing any attention to this, since they have always maintained that “Pope” Luciani died of completely natural causes, 33 days after his election.

That narrative must not be challenged — not even by a Mafia gangster coming closer to his Particular Judgment.

Watch out, semi-trads: The liberals, too, can play the "not infallible" game...

History records by Abp. Lambruschini confirmed that Paul VI said him directly that HV were not under infallibility. https://twitter.com/rightscholar/status/1555786811271778304

Francis says that not being afraid because the Lord will take care of us is "the certainty that your hearts should be attached to" - https://www.vatican.va/content/francesco/en/angelus/2022/documents/20220807-angelus.html Very good. But notice how he suddenly has no more problem with rigid attachment to certainty! #PopeFrancis