Culture of Encounter: Several of Francis’ “mobile tabernacles” have enriched the life of a Greek Orthodox priest in Venice. In Pescara, churchgoers had an unpleasant encounter with another walking holy-of-holies. Maybe that’s why not every Italian was thrilled when Francis tweeted his support for migrants again the other day.

India institutes Death Penalty for child sex offenders — guess who’s opposed to that. Brilliant argumentation: “The death penalty cannot be seen as an effective deterrent to any crime” but then “There should be stringent punishments for those playing with the life of innocent children in all forms of sexual offenses so as to generate fear among those committing such offenses”!

Francis honors advocate of mass sterilization and abortion, Jeffrey Sachs, at ecological meeting. Remember that next time he sheds crocodile tears over abortion or calls those who perform them “hitmen”.

Don’t you hate it when that happens? “Abp.” Charles Scicluna “inadvertendly” tweets support for gay pride…

Are you Novus Ordo? Then put your cards on the table!

Homophobia! Before a U.S. government commission, Hellboy James Martin throws his conservative co-religionists under the bus.

Books on Bergoglio aren’t just for the Lawlers, Sires, and De Matteis of the world — the other side can publish them too: Francis admirer Austen Ivereigh pens Wounded Shepherd: Pope Francis and His Struggle to Convert the Catholic Church, to be released in November. Just like Bergoglio, Ivereigh too likes to blaspheme our Lord, by the way.

Sounds like Church Militant, which had to give up its former name, Real Catholic TV, after the archdiocese of Detroit demanded it, though for a different reason: Jesuit school loses ‘Catholic’ title.

An Australian Novus Ordo priest has figured it out: We need more Vatican II!

And here’s what that could look like: Tribalism at “Catholic” Festival in Australia. Warm-up for the Amazon Synod?

Anglican-turned-Novus-Ordo-priest “Fr.” Vaughn Treco excommunicated, his parish closed, by “Bp.” Steven Lopes after sermon critical of the spirit of Vatican II and some actions committed by pseudo-popes. Official web site launched: Friends of Father Treco. It’s amazing how decisively Novus Ordo bishops can act if they really want to! Meanwhile, people like Hans Kung, Richard Rohr, and Robert Zollitsch are in good standing!

Transubstantiation and Perpetual Virginity denier “Cardinal” Gerhard Muller plays tough Catholic again, criticizes Amazon Synod working document. Fool me once, shame on you; fool me twice, shame on me. The latest interview with the unemployed Vatican Modernist can be read here.

While the world is still waiting for him to make good on his 2016 promise of a “formal correction” of Francis, “Cardinal” Raymond Burke now offers monthly phone chats…

Because they need more estrogen in the Vatican II Sect: Francis names seven women to Congregation for Institutes of Consecrated Life and Societies of Apostolic Life.

For the excluded, that’s why it’s by invitation only: Francis celebrates “Mass for Migrants” in Lampedusa commemoration.

Vatican “Cardinal” Robert Sarah is busy denouncing “so many priests selling off Catholic doctrine and sowing division among the faithful” but won’t identify the worst offender of them all, of course — his boss!

Yawn. Yet another heresy from Chaos Frank: “If your heart is egoistic you’re not a Christian”. Reality check: “If anyone shall say … that he, who has faith without charity, is not a Christian: let him be anathema” (Denz. 838).

Speaking of which: Lefebvrists are building largest SSPX church ever in St. Mary’s, Kansas. That will come in handy for when they join the Novus Ordo Sect and have to hand over all their property…

From the people who always seek to “go back to the Early Church” when it suits them: Reforming the Church with ‘no possibility of return’.

Move over, New Theology of the 1960s: Here comes an even newer theology! Because, just like back then, we have to “save the Church”!

Clericalism for me but not for you: The many grave additional questions concerning “Uncle Ted” McCarrick.

And ditto: “Presence of disgraced cardinals at [Francis’] ordination of new bishop causes uproar in Chile”.

Gay pride in Genoa? The “Archbishop” intervenes to stop — the prayers of reparation, of course!

The religion that claims to have preserved the Church from becoming a museum is responsible for turning another gorgeous Catholic church into a skateboarding park. Wish they’d turned it into a Catholic museum instead!

English Novus Ordo bishops apologize for flyer challenging perverted gender ideology. “But if the salt lose its savour, wherewith shall it be salted? It is good for nothing any more but to be cast out, and to be trodden on by men” (Mt 5:13).

But no worries, in Ireland they’ve gone a step further even: Irish “Catholic” school will allow boy students to wear skirts.

There’s only one cure now: John Paul II’s Theology of the Body to the rescue! Except it’s like treating cancer with HIV!

Few people are more useless in the world than American Novus Ordo bishops, and this post illustrates why: “Assembly of U.S. Catholics Bishops Reveals an Ugly, Incompetent Bureaucracy”.

At this point, the Dalai Lama is “more Catholic than the Pope”!

Stalinist purges and more: New developments in the Knights of Malta.

Francis confirms that he opposes seeking the conversion of the Eastern Orthodox to Catholicism. He had already stated explicitly that to try to convert the Orthodox would be a “great sin against ecumenism”.

“Cardinal” Charles Bo: “All major religions teach the core vision: Humanity is one huge family. We are all brothers and sisters. We share the same spirit: INTER BEING AND INTER DEPENDANCE. We are one. The great fruits of religious people are articulated in the simple sentence: COMPASSION IS THE COMMON RELIGION OF HUMANITY.” — Reality Check from Pope Saint Pius X: The Sillonists “…the notion of Fraternity … they found on the love of common interest or, beyond all philosophies and religions, on the mere notion of humanity, thus embracing with an equal love and tolerance all human beings and their miseries, whether these are intellectual, moral, or physical and temporal. But Catholic doctrine tells us that the primary duty of charity does not lie in the toleration of false ideas, however sincere they may be, nor in the theoretical or practical indifference towards the errors and vices in which we see our brethren plunged, but in the zeal for their intellectual and moral improvement as well as for their material well-being.”

Now that Wilton Gregory has taken over for Donald Wuerl in Washington, D.C., it’s … business as usual, what else!?

He was already worshipping the same god as the Moslems anyway: Retired “Bishop” of Pinerolo celebrates Ramadan. But that was in 2017 and he’s no longer in office. So that’s why his successor now does the same thing!

“Cardinal” Joseph Tobin, one of Chaos Frank’s favorites, permits special “Gay Pride Mass” in New Jersey. See, Hellboy was right! Though no one is perhaps worse than “Bp.” John Stowe of Lexington, Kentucky.

Francis warns German Novus Ordos they can’t just do their own thing. Oh? But didn’t he say we needn’t, and shouldn’t, “wait for the theologians”? Conclusion: Doing the “own thing” is OK as long as it’s his own thing!

Is Crux trying to groom the masses to be receptive of Francis ahead of his planned 2020 visit? Let’s see: “Argentines just can’t help criticizing their Pope”, writes Ines San Martin in tendentious piece.

“Abp.” Carlo Maria Vigano says the Vatican has covered up allegations of sexual abuse of “Pope’s” altar boys. (Robert Moynihan reports on this at length here.) But is anyone still listening? How effective are Vigano’s occasional salvos from hiding at this point? In any case, Vigano is the recipient of this year’s “Msgr. Alphonse S. Popek Award” by Catholics United for the Faith.

Chaos Frank is getting ready to “reform” the Roman Curia, but all sides are opposed to it. Too bad — they got the apostate they elected!

For your “Anything but Sedevacantism” files: What truckloads of heresy and apostasy on Francis’ part apparently couldn’t accomplish, Ratzinger’s idiotic view of the Papacy did: Blogger Non Veni Pacem now has “moral certitude” Francis isn’t Pope!

By the way: Francis’ letter to Germans is “open to many interpretations”, can you believe it?!

“A dangerous mixture of arrogance, ignorance, shallowness, hypocrisy and a lack of candor unlike anything seen in the living memory of the papacy”: Christopher Ferrara tears apart lengthy interview Francis gave to Vaticanist Valentina Alazraki.

The Steubenvillains in action: How about an unhealthy dose of “Catholic” Pentecostalism?

Underreported and highly significant: This is a landmark speech by Francis on the future of “Catholic theology”: “…a theology of discernment, of mercy and of welcoming, in dialogue with society, cultures and religions for the construction of the peaceful coexistence of individuals and peoples”. No stone will be left upon another!

Yes, “Pope” Francis lies habitually and without any scruples. Why should that be a surprise considering how much he hates Catholicism?

Remember this next time you see televised images of crying children near a border fence: Authorities investigate reports of migrants trying to buy children to enter the U.S.

Study the Modernist occupation from every angle: Webcams in the Vatican.

This is a good reminder that not everything you read in the news is true: Irish newspapers apologize, pay ex-seminarian “after admitting they falsely claimed he was expelled from formation after being found in bed with another seminarian.”

The CMRI’s annual sedevacantist Fatima Conference is open for registration. To be held Oct. 9-13, 2019.

Theological prototype of Vatican II: The robber synod of Pisotia in 1786, condemned by Pope Pius VI. 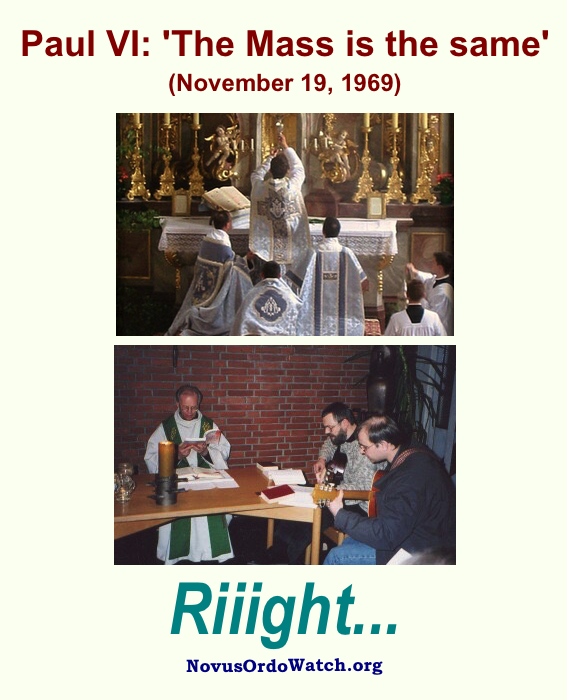 Biden-Harris. First time in awhile that the Democratic ticket hasn’t had a Catholic on it. Sad.

Pope or Antipope? “Fr.” John Hunwicke and the Case of Felix II - https://novusordowatch.org/2020/08/pope-or-antipope-hunwicke-felix2/ He could have just looked it up; instead he shows the whole world he doesn’t know what he’s talking about. #catholic #CatholicTwitter #pope 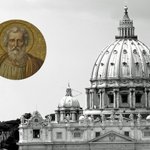 @HonestHilaryJMJ @MattGaspers @cathfamilynews I don’t know what his motive is/was, but I think his motive doesn’t really matter.

Yeah, once you’ve got a false church, you can throw all of it out… just don’t pretend the Vatican II Sect is the Catholic Church.

Vigano: "I ask you, what prevents the Acts of Vatican II from deviating from the path of Tradition, when the Supreme Pastor himself [i.e. Pope Francis] can deny the teaching of his Predecessors?"

@NovusOrdoWatch @MattGaspers @cathfamilynews I hope that now that this has been brought to their attention they will look into it. It was VERY disappointing both from a moral and academic point of view that @TaylorRMarshall chose to ignore it. Its in print, it won't go away that easily. Truth Matters, so does honesty.