TRADCAST 023 consists of two separate segments. In the first, we look at how Sedevacantists are truly the “last Catholics”, those who believe exactly what was believed and taught until Pope Pius XII died and refused to change their religion afterwards. We contrast this with those who mean to be traditional Catholics but, because they insist on recognizing John XXIII and his successors as valid Popes, tinker with Catholic doctrine on the Papacy and Church authority in order to make it fit. We also talk about the Vatican’s recent agreement with China, look at “Abp.” Georg Ganswein’s absurd contention that the Lutheran theologian Dietrich Bonhoeffer (1906-1945) intercedes for us in Heaven, and review how the Catholic Faith is based on reason. This long first segment ends with a discussion of the Vatican’s obsessive focus on environmentalism and Francis’ shameful silence on the persecution of Asia Bibi in Pakistan.

In the shorter second segment, we highlight some fundamental differences between the traditional Roman Catholic Mass and the “New Mass” of Paul VI, condemn Francis for his blasphemous claim that Christ’s authority is rooted in the closeness He showed to the people, and we end by recommending the new book Contra Crawford.

Listening to TRADCAST is like drinking from a firehose of information. As always, the podcast is interlaced with important insights, quotes from solid Catholic sources, and some much-needed humor! The total run time of TRADCAST 023 is 1 hour and 1 minute.

Here’s an idea: While you have the family over for the Thanksgiving weekend, why not listen together and discuss the show? Or how about hosting a virtual discussion with traditionalist or non-traditionalist friends using Google Hangouts or a similar conference tool?

If you are interested in listening to older shows, you can do so using our complete episodes list; or listen to a sermon or an apologetics/catechism class with your friends and family as well. This makes for great conversation — much more important than the usual family discussions — and will open people’s eyes about Francis and the Novus Ordo Sect! It’s one way you can do evangelization the easy way. In any case, don’t miss this TRADCAST and spread the word!

You can listen free of charge by playing the YouTube video above, or you can go to our TRADCAST 023 page, where you will find all the information you need for this show, including links to all the articles, books, blog posts, etc., mentioned in the podcast, and where you will also find ways to download this episode to your computer and sign up to be notified of new episodes by email.

As always, TRADCAST is entirely free of charge. Listeners who would like to support this podcast with a tax-deductible donation, may do so here. 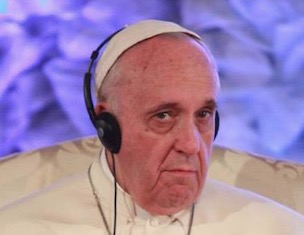