In June of 1968, the American TV channel NBC aired a 50-minute documentary entitled The New American Catholic, and it shows how unrecognizable this new “Catholic Church” was less than 10 years after Pope Pius XII had died.

The documentary, embedded below, contains some familiar themes: the brotherhood of man, emancipation from Church authority, the role of the priest, the hermeneutic of reform in continuity, that pesky celibacy thing, Kumbaya, rebellious nuns and nuns without habits, the Mass as a community meal, balloons, greater concern for the natural than the supernatural, that Mamas & Papas sound, etc., ad nauseam.

It is somewhat difficult to watch, but it definitely illustrates well what things were like when the rubber of the Modernist Revolution began to hit the road:

One of the things that stand out in the video is that despite the theological, liturgical, and cultural mess that is showcased, nevertheless most of the people in the clip are extremely well dressed, especially compared to subsequent years.

Bishop Shannon resigned as auxiliary bishop of St. Paul-Minneapolis over Paul VI’s prohibition of birth control in 1968, a few months after the broadcast of the NBC documentary. But that was not to be the end. On Aug. 2, 1969, Shannon “married” a Protestant woman in a civil ceremony, by which he automatically excommunicated himself. He was subsequently laicized. Shannon died in 2003. 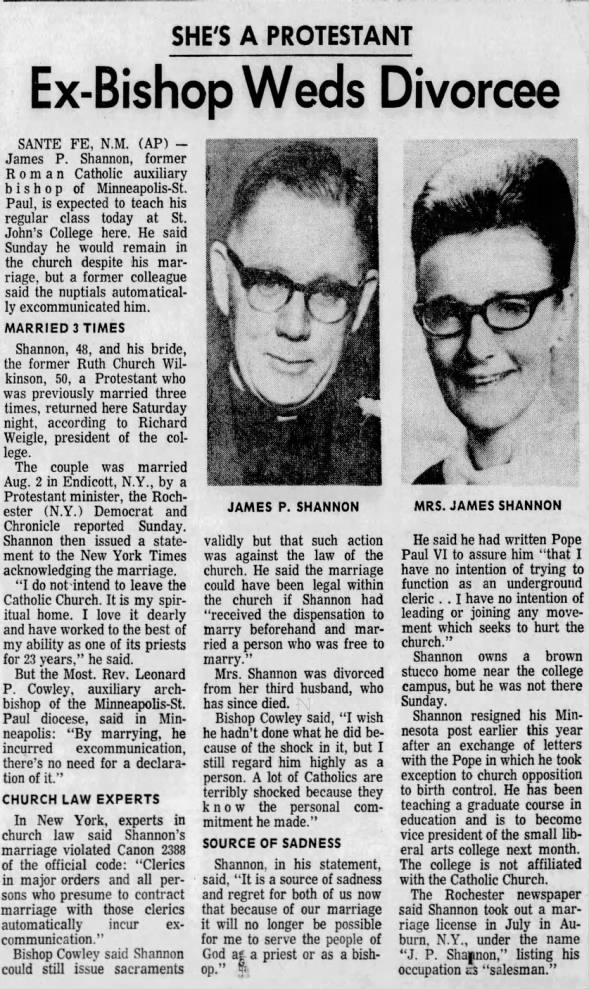 Bishop Victor Reed died in 1971 with a reputation as a hardcore progressive: “I have felt that this era in the history of the Church requires a greater degree of permissiveness than is ordinarily required. Because we are in a period of criticism of the past, and this criticism is meant to be constructive”, the false shepherd is quoted as saying in an Aug. 24, 1966, article of the National Catholic Reporter (p. 2).

Reed had attended all sessions of Vatican II, and by 1966 things were so bad in his diocese of Oklahoma City that traditionalists picketed his residence and called for his ouster.

Next, we turn to Father William Nerin, the priest who is seen offering the sacrilegious “Mass” for the Community of John XXIII in the video documentary. It is important here to remember that Paul VI’s Novus Ordo Missae had not yet been introduced — that was not to happen until 1969. Fr. Nerin used the 1964 transitional missal, which was not obligatory but certainly permitted. The vernacular canon of the Mass had been introduced in the United States on Oct. 22, 1967, a day that lives in infamy as “Black Sunday”.

In 1975, the Community of John XXIII split from the Oklahoma diocese and went its own way — together with Fr. Nerin, who left the priesthood that same year. 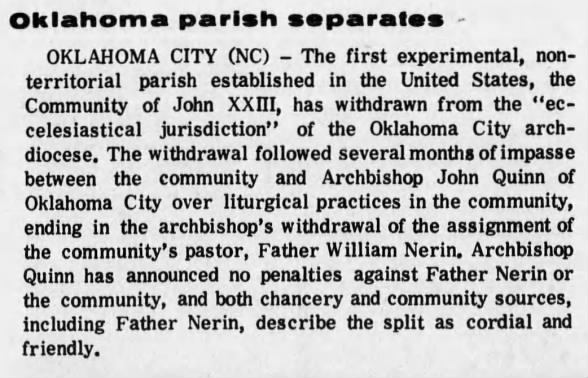 Now “Abp.” John Quinn, the diocesan ordinary, wasn’t exactly a conservative himself, so the fact that the Community of John XXIII could not operate under his jurisdiction says a lot about that “experimental parish” so promoted in the NBC documentary.

In his later years, Bill dedicated himself to work on campaign finance reform, social justice and inclusion. He worked tirelessly to support those less fortunate. He was an avid supporter of the ACLU, believing in the power and importance of civil rights in the 21st century, campaigning for a better, more equitable and inclusive United States. As an active member of his community, Bill fervently fought for the rights of all. He dedicated much of his free time to social justice causes and has left most of his estate to support the charities he valued so highly.

We will leave it at that.

Father James Groppi is the social justice priest in the documentary who, asked what he thinks of the Catholic Church, answers: “To tell you the truth, I don’t even think about it.” Of course it is noble for a priest to work for justice and to engage in corporal works of mercy to alleviate the temporal sufferings of those in need. However, this the Catholic Church had done from the very beginning and is not something liberal clergy discovered in the 1960s. That Groppi’s concern was only for the temporal and mundane rather than for the eternal and heavenly, is clear not only from his disparaging comments about the Church, the Kingdom of God on earth, but also from his subsequent behavior.

In April of 1976, Groppi “married” a university professor in a civil ceremony, which incurred him automatic excommunication. It is becoming a familiar theme. 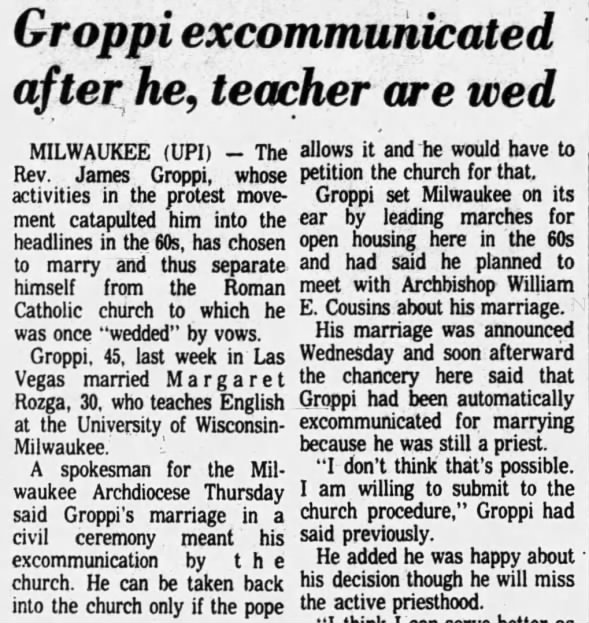 Lastly, the vociferous Modernist lay conference speaker shown in The New American Catholic is Mr. Donald J. Thorman. He was publisher of the National Catholic Reporter, that über-liberal rag founded in 1964 that is so anti-Catholic that even the Vatican II Sect has condemned it.

So the National Catholic Reporter was actually denounced within five years of its inception, under Thorman’s watch, who had taken over as publisher after the resignation of co-founder Michael J. Greene in late 1965. Needless to say, Thorman didn’t give a hoot about the episcopal condemnation, and to this day the ultra-leftist publication is grossly misnamed National Catholic Reporter.

The Modernist Thorman was called to render an account to Almighty God on Nov. 30, 1977, after a sudden heart attack. He was 52.

After all the hellish reports above regarding the Modernist takeover, it will be soothing and refreshing to focus on some good news, so here we remind readers of two very edifying videos we have published before:

At the same time, a great companion to the New American Catholic video would be the Space and Light documentary made about St. Peter’s Seminary in Cardross, Scotland, that opened in 1966 to accommodate the “New Springtime” of Vatican II and had to close down a mere 12 years later precisely on account of the change in season:

Don’t be discouraged, dear readers. This apostasy we are still living through was prophesied in Sacred Scripture as being the necessary prelude to our Blessed Lord’s Second Coming:

Do not be terrified out of your senses all at once, and thrown into confusion, by any spiritual utterance, any message or letter purporting to come from us, which suggests that the day of the Lord is close at hand. Do not let anyone find the means of leading you astray. The apostasy must come first; the champion of wickedness must appear first, destined to inherit perdition. This is the rebel who is to lift up his head above every divine name, above all that men hold in reverence, till at last he enthrones himself in God’s temple, and proclaims himself as God.

Shouldn’t be much longer now.