The bishops ordained in the Vatican II Church’s Roman Rite since 1968 are invalid. This is the unsettling but certain conclusion one comes to when examining the sacramental form prescribed by “Pope” Paul VI in his 1968 revision to the rite of episcopal consecration. This means that the clergy who undergo the ceremony for the ordination of a bishop in the Novus Ordo Church do not actually become bishops.… READ MORE 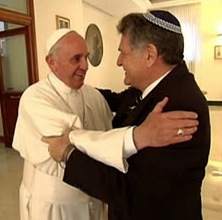 “I Can’t Believe It’s Not Catholic”…

Francis Has a New Crozier

Apparently the old ferula, or crozier, introduced by “Pope” Paul VI, wasn’t hideous enough. On November 1, the feast of All Saints, “Pope” Francis showed off his new pastoral staff, with a “Risen Christ” figure that some have said resembles a millipede more than the Incarnate Son of God.

You can view more photos with greater detail of this irreverent “art” at this blog here, where you will also find out where this ferula comes from. In 1947, Pope Pius XII had condemned crucifixes which display a Risen Christ (so-called “Resurrexifixes”), though, granted, His Holiness didn’t address the question of liturgical millipedes: “…one would be straying from the straight path … were he to order the crucifix so designed that the divine Redeemer’s body shows no trace of His cruel sufferings” (Pius XII, Encyclical Mediator Dei, n.… READ MORE