On Jan. 14, 2022, the blogging “traditional Catholic” presbyter John Zuhlsdorf — known by his moniker “Father Z” — informed his readership that he had just watched “an interesting movie” that he thinks “could be a metaphor for what is going on in the Church”. The film is called Don’t Look Up (2021) and falls into the genre of satirical science fiction.

What’s the problem? The problem is that the 138-minute motion picture is really not something permissible for a Catholic to watch, as we will discuss shortly. As he himself acknowledges towards the beginning of his post:

I’ll get some blah blah out of the way here. There’s bad language, sinful behavior, and some coldly unappealing nudity with a rather darkly comic results. Sounds like much of the fallen human condition.

That is as much of a heads-up the “priestly” blogger is willing to give. The fact that he calls an immoral content warning “blah blah” indicates his attitude towards that sort of thing.

Later on, he does give a “WARNING” — in all caps, no less — but not concerning anything objectionable in the movie; rather, he is alerting his fan base that there might be “spoilers” in his post’s combox that could give away the film’s ending! By the end of his incredibly edifying write-up he assures people that “I’ll turn the moderation queue on….” — it’s not like he’d want your eyes to be subjected to uncensored content! If not your head, got to at least keep the combox clean.

So now we know what the Reverend considers important enough for a genuine warning and what’s just “blah blah”.

By no means does Mr. Zuhlsdorf blog about Don’t Look Up to warn others about it. On the contrary, “Fr. Z” explicitly requests his followers to watch the movie so they can then tell him what they think about his “metaphor for what’s going on in the Church” theory — clearly, an incredibly important endeavor:

Your thoughts on this movie and my nudge of it out of the puerile sphere of climate change ideology and political smearing towards being a metaphor for what’s going on in the Church would be illuminating.

Let’s say 25 people chime in with their thoughts about whether that flick is or isn’t, in their opinion, “a metaphor for what’s going on in the Church” at present. Then what? What does that do? Nothing — but it sure kept the hapless souls who read his blog busy for a while.

But now it’s time to look at just how offensive this movie is. To do that, we don’t have to actually watch it ourselves, we can simply go by the reviews and ratings of credible sources.

First off, the Motion Picture Association of America‘s official rating for Don’t Look Up is “R – Restricted”. The reason for the rating given on the Internet Movie Database (IMDb) is: “Rated R for language throughout, some sexual content, graphic nudity and drug content.” (We won’t link the source since the site has so many lewd images.)

For obvious reasons we don’t want to list the details here, but those who “must” read about them (be careful!), can find them spelled out at the following link:

In the Common Sense Media reviews, the number of dots for a category indicates the prevalence of that type of content, and so “five dots indicates that there’s lots of it” in the movie, as the explanation of their rating system notes.

Another independent motion picture review site is Kids In Mind, a web site that simply describes in detail what things a film contains and lets anyone, especially parents and prospective viewers, decide as to whether a particular film is acceptable to watch. We mention this to underscore that the review site is not biased.

According to the Kids In Mind review, Don’t Look Up checks 7 out of 10 boxes for Sex & Nudity, and 9 out of 10 for Language (screenshot):

Descriptive details for the content can be found at the following link (again, be careful):

To be clear: We provide links to these detailed reviews not because we encourage people to read them but because we have to provide documentation to substantiate our criticism.

With regard to the Language category, we wish to point out here that, according to the Kids in Mind review, not only does this movie “Father” wants you to watch include dozens of F-words, it also contains “10 religious profanities” and “30 religious exclamations”. As a reminder of what the Rev. Zuhlsdorf should have learned in First Communion class, the Second Commandment says: “Thou shalt not take the name of the Lord thy God in vain: for the Lord will not hold him guiltless that shall take the name of the Lord his God in vain” (Ex 20:7). That is a divine commandment, not a mere suggestion.

In the old days, there was something called the Legion of Decency in the United States, founded in 1933 by Archbishop John McNicholas of Cincinnati, Ohio. Its stated objective, which Pope Pius XI referred to as a “holy crusade”, was to keep immoral or otherwise harmful or objectionable content out of motion pictures, an endeavor that was, overall, quite successful.

Here is a newspaper clipping on the Legion taken from The Tidings of June 2, 1950: 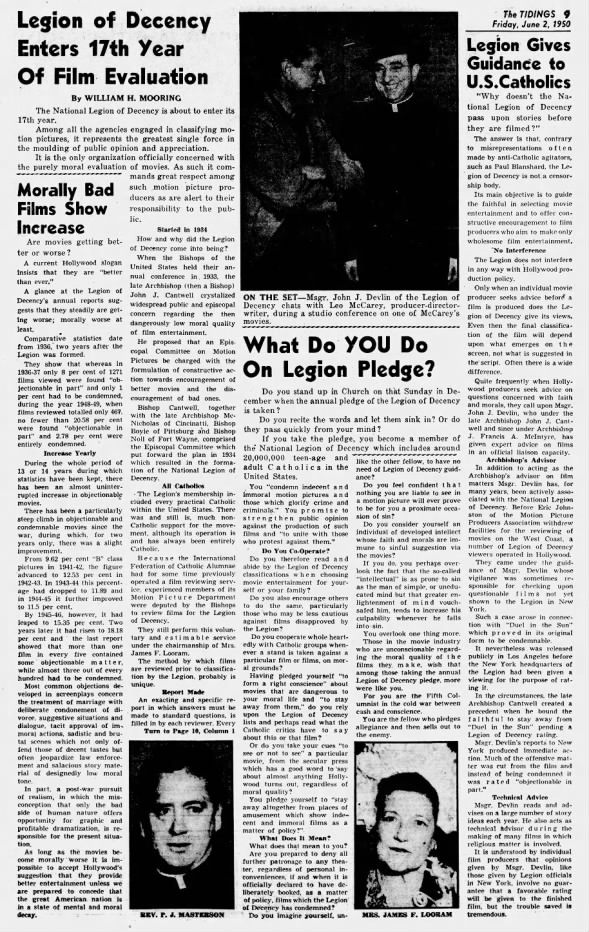 Of course, the Legion disintegrated after the Second Vatican Council (a small, laughable remnant of it survives to this day in the United States Conference of Non-Catholic Bishops), and so the dam broke that had tried as much as possible to keep fallen man’s filth out of, in particular, the minds of the youth. The result was predictable: Once let loose, the moral sewer quickly turned into a raging river that has been poisoning millions of souls ever since.

There are still a lot of good-willed people stuck in the Novus Ordo Church who, striving to be real Catholics, want to lead holy lives and keep themselves away from the defilements of the secular world (cf. Jas 1:27). They seek out what they think are good priests to turn to for the kind of advice they really need but can no longer get from their own parish’s clergy, especially on moral matters. What kinds of movies to watch is one of those very things they’d want guidance on, especially if they have children. And since Mr. Zuhlsdorf — sorry, but his 1991 ordination by “Pope” John Paul II is arguably invalid — is precisely the kind of man many in the Novus Ordo would consider a “good and reliable Catholic priest”, what he says on such matters carries a lot of weight with a great number of people.

This is not, then, simply about one man’s private sin of having watched an indecent movie. This is about a supposed traditional Catholic spiritual leader who has countless fans and followers, publicly recommending on his popular and influential blog that others imitate him in watching a film that is clearly forbidden for Catholics to watch. This is, in the truest sense of the term, a scandal, a stumbling block to others’ spiritual well-being.

Alas, this is not even the first such offense for “Father Z”. On Oct. 30, 2013, the biretta-wearing presbyter reviewed and recommended the indecent German drama The Lives of Others (“Das Leben der Anderen“, 2007). We rebuked him for that as well back then:

This kind of thing is inexcusable. The very least the Reverend could have done is shut up about what he’s watched — instead of blogging about it and enticing others to do likewise.

The matter is quite serious. Our Blessed Lord Himself warned: “But I say to you, that whosoever shall look on a woman to lust after her, hath already committed adultery with her in his heart” (Mt 5:28). Over 100 years ago, Our Lady of Fatima lamented: “More souls go to Hell because of sins of the flesh than for any other reason.” And St. James the Apostle wrote: “Religion clean and undefiled before God and the Father, is this: to visit the fatherless and widows in their tribulation: and to keep one’s self unspotted from this world” (Jas 1:27).

But then, maybe Mr. Zuhlsdorf is just looking for another reason to tell his followers: “GO TO CONFESSION!”