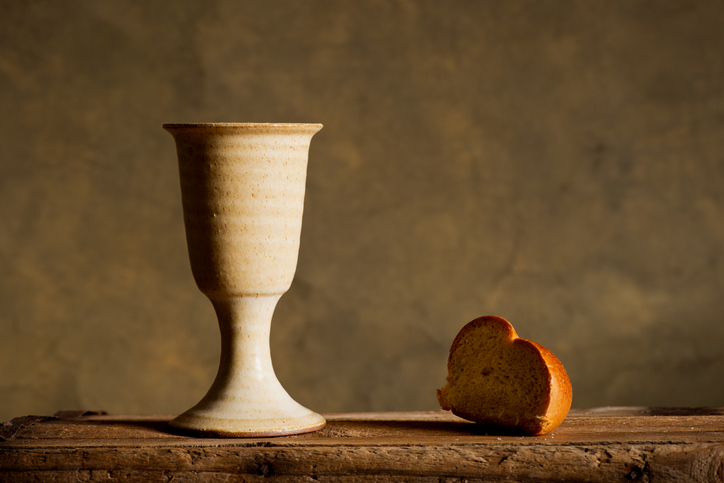 During the joint service in Lund Cathedral, where Francis looked indistinguishable from the Lutheran male and female (!) “clergy” standing around him, the papal pretender listened docilely when the Rev. Martin Junge, Secretary General of the Lutheran World Federation, issued the following plea:

…may God find us building bridges so that we can draw closer to each other, houses where we can meet together, and tables — yes, tables — where we can share the bread and the wine, the presence of Christ, who has never left us and who calls us to abide in him so that the world may believe.

As for the source of this quote, it is taken directly from this report by the Catholic Herald, which is based on the spoken words of the video feed that was transmitted live from the ecumenical event (see at 52:55 mark here), of which we provide a screenshot below: Folks, after 50+ years of ecumenism and dialogue ad nauseam, this is where they’re at: Pro-abortion and pro-perversion “Christians” want to eat “the bread and the wine” at the same “table” with “Catholics”. This vindicates what we’ve always been saying, namely, that ecumenism has nothing to do with converting heretics to Catholicism, and this is something that Francis has recently affirmed explicitly on various occasions (see here, for example).

But, not to worry: At Lund, Francis and “Bishop” Munib Younan, a representative of the Lutheran World Federation, signed a joint declaration in which they promise their “commitment to theological dialogue” so that they will soon be able to “share God’s redeeming presence at the Eucharistic table”. We suggest they start with handing them a copy of the documents of the Council of Trent, with highlighter applied to Canon II of Session 13:

If anyone says that in the sacred and holy sacrament of the Eucharist there remains the substance of bread and wine together with the body and blood of our Lord Jesus Christ, and denies that wonderful and singular conversion of the whole substance of the bread into the body, and of the entire substance of the wine into the blood, the species of the bread and wine only remaining, a change which the Catholic Church most fittingly calls transubstantiation: let him be anathema.

Speaking to reporters in Sweden, the Vatican’s top ecumenical official, the Swiss “Cardinal” Kurt Koch, explained that even though shared “Eucharistic communion” is not possible at this stage, nevertheless exceptions can be made on an individual basis (sound familiar?):

The term hospitality is used to refer to welcoming guests to the Eucharist on special occasions or under special circumstances as long as they recognize the sacrament as the real presence of Christ. Eucharist communion, on the other hand, refers to a more regular situation of the reception of Communion by people recognized as belonging to the same family.

“Eucharistic communion, for us Catholics, is the goal” of ecumenical dialogue and will be “a visible sign of ecclesial communion” or full union, Cardinal Koch said at a news conference. “The other question — hospitality in the case of a mixed marriage — is a pastoral question,” which will require discussion, particularly on the level of dioceses.

“It is very difficult to give a universal declaration because the pastoral situations are very different” from country to country, the cardinal said.

So, until “Eucharistic communion”, there is always “Eucharistic hospitality”, and we know where Francis stands on that. Remember that when he was asked a year ago by a Lutheran questioner about whether she could receive “Holy Communion” in a Novus Ordo service, he answered that he did not “dare” to give blanket permission for it and opted instead for the individualist solution: “Talk to the Lord and go forward”, was his brilliant answer. Translation: “Do whatever. No one is going to stop you.”

This is also entirely in line with the universal ecclesiastical law established by “Saint” John Paul II in 1983, which he promulgated with the full force of his supposed apostolic authority: Canon 844.3-4 of the Novus Ordo Code of Canon Law permits Protestants and Eastern Orthodox to receive “Holy Communion” under certain conditions but without requiring their conversion to Catholicism. We have a substantial post on this explaining the details:

If we then recall that the sexual-diversity-embracing Finnish Lutherans who visited the Vatican in January of this year were given “Communion” at the Vatican, we understand that there is method to the madness.

Dear reader, if at this point you are still not ready to exit the false Vatican II Church, please, at least stop funding the beast.

Meanwhile, the semi-traditionalists’ chief rhetorician, Christopher Ferrara, has penned a piece slamming Francis for his latest ecumenaniacal disaster, calling it the “Ecumenical Game of Let’s Pretend”. That’s indeed what it is, but unfortunately for Mr. Ferrara, the game also, and above all, includes the line, “Let’s pretend Francis is the Pope”, and Ferrara himself is happily playing along — thus aiding and abetting the whole charade to begin with.

Blind to the absurdity of his own position due to his stubborn refusal to embrace Sedevacantism or even consider it a possibility, Ferrara laments that Lutherans are not entering the very church that is at the forefront of all this ecumania to begin with. Why should they, if the Novus Ordo Sect is the True Church? What would they be joining if not a “false religion being masqueraded as the Catholic religion”, a “massive … fraud”, as Ferrara himself called it last December (see 16:42 mark in this video)?

Alas, none are so blind as those who refuse to see.

3 Responses to “Theological Freakshow in Lund: Let’s Build “Tables where we can share the Bread and Wine”!”