Yes, you read that right: “…with a special message from His Holiness, Pope Francis”. The Argentinian papal impostor will join and give his “blessing” to the heretical conference by video message, just as he did in May 2015, when he addressed the Protestant “Day for Christian Unity” in Phoenix, Arizona.

The July 16 meeting in D.C. will try to “transcend” doctrinal differences between “Christians” and instead focus “on Jesus”, promoting a lowest-common-denominator message as supposedly being the “Gospel” of our Blessed Lord. Presumably, Scripture reading will be somewhat selective and not include the following: “Whosoever revolteth, and continueth not in the doctrine of Christ, hath not God. He that continueth in the doctrine, the same hath both the Father and the Son. If any man come to you, and bring not this doctrine, receive him not into the house nor say to him, God speed you” (2 Jn 9-10).

The interdenominational event will feature “worship”, prayer, music, pep talks, and what not. Details can be found at the web site, reset2016.com, from which the following two videos are taken:

But, truth be told, we are very much welcoming the fact that Francis has threatened to send a video message to the event. Because last time he did that, he candidly confessed that what he was saying is “perhaps a heresy, I don’t know”. Remember? See here:

So, chances are that Francis will say more of what he really thinks, and the more he reveals his mind, the more evident it becomes that the man may be a lot of things, but Pope of the Catholic Church isn’t one of them.

In any case, a virtually doctrine-less prayer-fest where it’s all about feeling and experience is right up Francis’ alley, so we expect he will have some very interesting and revealing things to say. It is not known whether SSPX Bp. Bernard Fellay will attend, who recently seemed to welcome the fact that doctrine is not that important to Francis as long as you “love Jesus”.

In any case, let’s recall some of the highlights of Francis’ dealings with Protestants in the last few years:

A video from his days as “Cardinal” Jorge Bergoglio is also appropriate to review:

We have laid out the true Catholic doctrine on religious unity many times in the past, and there is no need to repeat everything here. But we would like to quote once more our Holy Father, Pope Pius IX, who, issuing a heartfelt appeal to all Protestants to return to the holy Catholic Church as he convoked the First Vatican Council, summarized the essential difference between God’s true Church and the Protestant sects:

No one can deny or doubt that Jesus Christ himself, in order to apply the fruits of his redemption to all generations of men, built his only Church in this world on Peter; that is to say, the Church, One, Holy, Catholic, and Apostolic; and that he gave to it all necessary power, that the deposit of Faith might be preserved whole and inviolable, and that the same Faith might be taught to all peoples, kindreds, and nations, that through baptism all men might become members of his mystical body, and that the new life of grace, without which no one can ever merit and attain to life eternal, might always be preserved and perfected in them; and that this same Church, which is his mystical body, might always remain in its own nature firm and immovable to the end of time, that it might flourish, and supply to all its children all the means of Salvation.

Now, whoever will carefully examine and reflect upon the condition of the various religious societies, divided among themselves, and separated from the Catholic Church, which, from the days of our Lord Jesus Christ and his Apostles has never ceased to exercise, by its lawful pastors, and still continues to exercise, the divine power committed to it by this same Lord; cannot fail to satisfy himself that neither any one of these societies by itself, nor all of them together, can in any manner constitute and be that One Catholic Church which Christ our Lord built, and established, and willed should continue; and that they cannot in any way be said to be branches or parts of that Church, since they are visibly cut off from Catholic unity. For, whereas such societies are destitute of that living authority established by God, which especially teaches men what is of Faith, and what the rule of morals, and directs and guides them in all those things which pertain to eternal salvation, so they have continually varied in their doctrines, and this change and variation is ceaselessly going on among them. Every one must perfectly understand, and clearly and evidently see, that such a state of things is directly opposed to the nature of the Church instituted by our Lord Jesus Christ; for in that Church truth must always continue firm and ever inaccessible to all change, as a deposit given to that Church to be guarded in its integrity, for the guardianship of which the presence and aid of the Holy Ghost have been promised to the Church for ever. No one, moreover, can be ignorant that from these discordant doctrines and opinions social schisms have arisen, and that these again have given birth to sects and communions without number, which spread themselves continually, to the increasing injury of Christian and civil society.

Other genuine papal/magisterial documents on the question of religious unity include the following:

The true Catholic Church of our Lord Jesus Christ can only promote the return of the erring sheep to her fold, for that is the only religious unity established and desired by God. 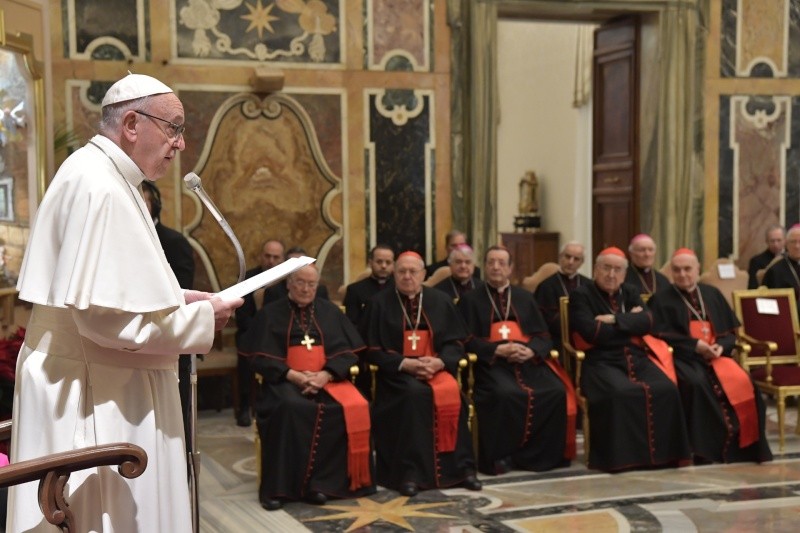