Mother Teresa of Calcutta in 1989:
“I Love All Religions” 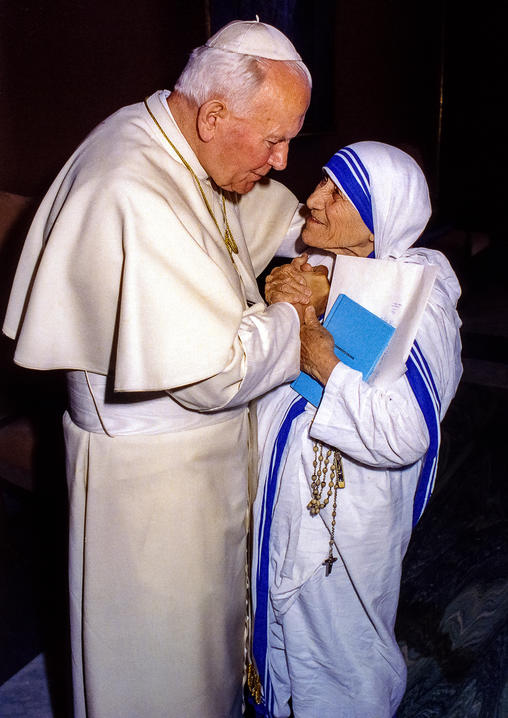 Hailed by the world and the Vatican II Sect as a “saint”, the woman known as Mother Teresa engaged indeed in heroic corporal works of mercy – however, only at the expense of the spiritual works of mercy, which are, by their very nature, more important and more excellent than the corporal works.

Though she no doubt cared for the bodily needs of the poor in a most selfless fashion, the sad truth is that “Blessed” Mother Teresa – as she is called in the Novus Ordo Church – was not a Roman Catholic but an apostate from the Faith, and all the most heroic charitable works cannot make an apostate into a Catholic. Below you will find some shocking evidence:

The Indifferentism and Apostasy of Mother Teresa

Against Mother Teresa’s popular “I love all religions” slogan, which puts Christ and His Truth on the same level as Satan and his lies, we need but quote the popular 19th-century Redemptorist priest Fr. Michael Muller, who addressed this blasphemous idea directly:

We must reinforce this most neglected and politically-incorrect truth that the True Faith is essential for salvation, that all works of charity can only be fruitful and availing to salvation if they are performed inside the Roman Catholic Church, either as a member or as someone joined to her through faith, hope, charity and perfect contrition, because outside this Church, no one can attain eternal salvation:

The facts speak for themselves. Tragically, Mother Teresa of Calcutta was not only not a Catholic saint, she was not a Catholic at all but an apostate from the Faith.

One Response to “Mother Teresa: “I Love All Religions””