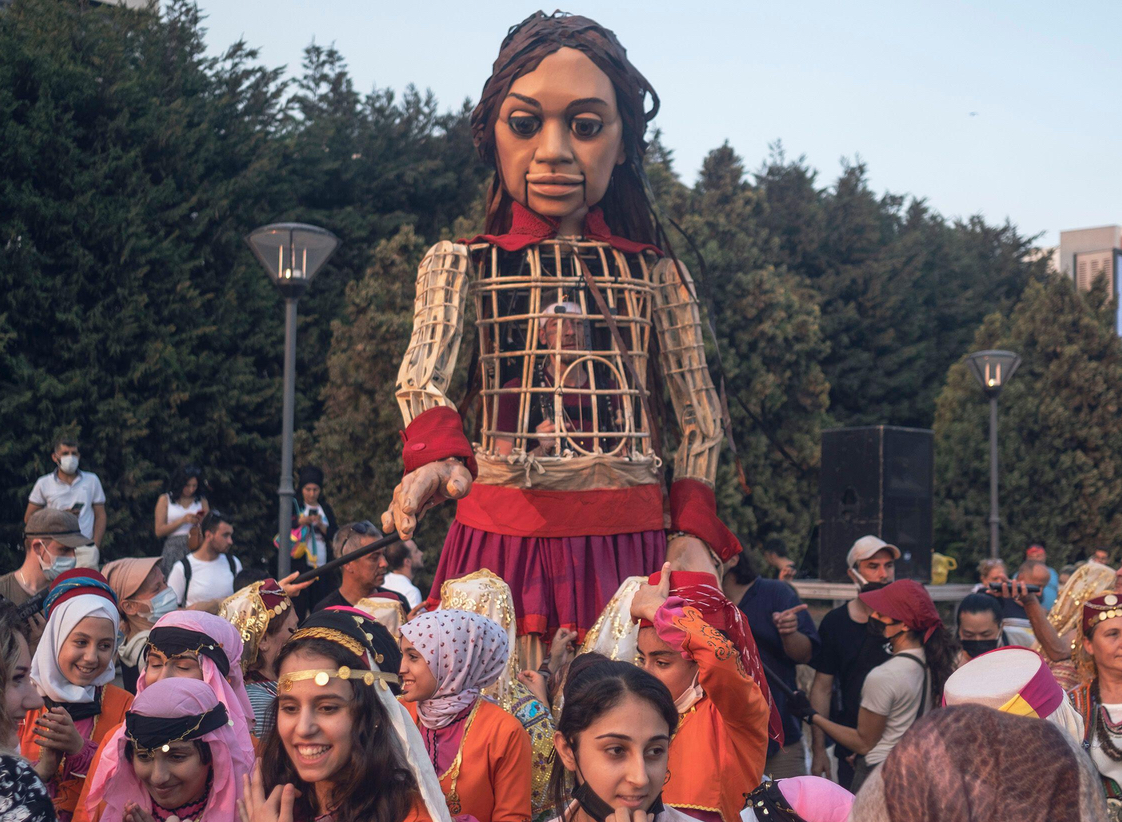 “Little Amal” is the name given to an enormous puppet that is currently traveling through Europe. Its journey began on July 27 in Gaziantep, southern Turkey (near Syria), and its final stop will be Manchester, England, for a total of 8,000 km (4,971 miles).

Amal — the name is Arabic for “hope” — is supposed to represent a nine-year-old refugee girl in search of her mother. The puppet is meant to stand for the alleged masses of displaced minors fleeing from wars and persecution. It is 3.5 meters in height (almost 12 feet) and bears uncanny resemblance to the Celtic-pagan sacrificial wicker cage of the extremely lewd 1973 horror movie The Wicker Man. More on that in a minute.

Originally Amal was to arrive at the Manchester International Festival in July, where she was going to be “the centrepiece of a large-scale participatory event,” according to The Guardian. Thankfully, that didn’t work out, as the puppet got off to a late start. The Manchester jamboree is a bizarro event that includes utterly perverted stuff, so we won’t link to it. Suffice it to say that you can find such “artistic contributions” there as a “queer gardening simulation”, so let’s just move on.

The overall project that Amal is the protagonist of is called “The Walk” and is described as “a travelling festival of art and hope in support of refugees”. The following 2-minute video clip has details:

Here is an embedded image viewer with a total of five different shots showing the “refugee girl”:

The puppet’s most recent sighting was in Bari, Italy. On Friday, Sep. 10, it is scheduled to arrive in Rome, where it will receive a cheerful welcome in the Vatican, as the Italian edition of Vatican News is happy to report at some length. At 10:30 am local time, the Jesuit “Cardinal” Michael Czerny, Under-Secretary of the Dicastery for Promoting Integral Human Development, as well as Rome’s auxiliary “Bp.” Benoni Ambarus will greet the monstrous doll and the people accompanying it. And then:

This will be followed by the testimony of a refugee minor hosted in a Caritas facility in Rome. The young participants in what has also been conceived as a moment of celebration will then be able to take part in a workshop for the construction of a kite, promoted by ASCS (Scalabrinian Agency for Cooperative Development). The Agesci Roma 51 Scouts, meanwhile, will build a tent, as Abraham did at the Oaks of Mamre. The event will end with a snack offered to all the children and a farewell to Amal, who will continue her journey through Europe.

No doubt, the world will have some memorable photos and video clips to look forward to on Friday. Until then, people can meditate on the words of “Cardinal” Czerny as reported by the Vatican press:

“Amal is big and beautiful, and meeting her is a pleasure,” Cardinal Czerny says, “but immediately it reminds us that meeting the vulnerable migrants, precarious workers and asylum seekers in our midst requires more than just a glance. Each of them, with their own baggage of suffering and dreams, needs and talents, is waiting for us to open our ears, our minds and our hearts as well as our eyes and reach out our hands.” The cardinal emphasizes that Amal is “completely defenseless and among the most vulnerable. Uprooted from her family, her community, her aspirations, she must rely on strangers to welcome and protect her in order to become the person God has made her [to be] and to take her rightful place in the community that welcomes her.”

Let’s see if Mr. Czerny will also show himself solicitous for Amal’s spiritual well-being so that not only her bodily but also her spiritual needs will be met, lest she will have lived her life in vain in the end. We have our doubts.

The creepy puppet was made by the Handspring Puppet Company of Cape Town, South Africa, by the way. Its creators explain the “making of” in the 5-minute video below:

There is something inherently frightful about such oversized puppets. Amal’s somber facial expression does not edify either, and the large gaps in her face that allow the jaw to move, can make it look as though blood were dripping from her mouth.

If the Amal circus doesn’t remind you of another harrowing puppet pageant, it should. Remember the Palm Sunday madness at St. Joan of Arc “Catholic” church in Minneapolis? Scene from The Wicker Man (1973) — notice the person locked up inside the torso.
Any similarities with Little Amal must be entirely coincidental.
(image: Pictorial Press Ltd / Alamy Stock Photo)

The refugee puppet is not actually made out of wicker but of molded cane and carbon fiber. The effect, however, isn’t much different.

The fact that its final stop is in England is all the more curious when one considers that Ritual, the original novel that inspired The Wicker Man, is set in England, and is centered on a little girl.

In any case, let’s see how things go in the Vatican on Friday. Perhaps Pachamama will make an appearance as well, or the other creepy demon in the Vatican.